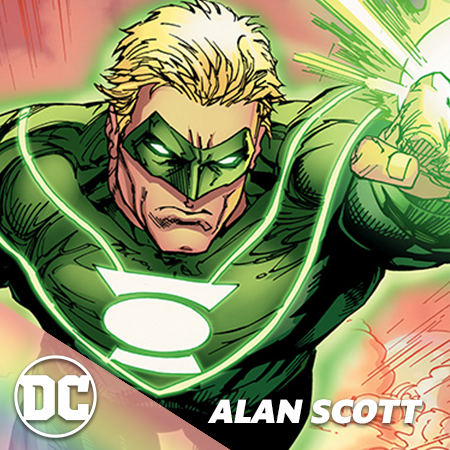 Pride Profile: Green Lantern Alan Scott. It doesn’t get more old school - and at the same time, more contemporary - than Alan Scott. Introduced by Martin Nodell in 1940’s All-American Comics #16, Scott joinied the JSA in All Star Comics #3. Nodell’s inspirations ran from Wagner’s The Ring of the Nibelung opera to a rail worker’s green lantern. Between Scott’s colorful flowing costume and unique magical ring, he cut a powerful figure that was ultimately was only defeated by the sinking of superhero comic sales in the late '40s. When the Green Lantern concept was reintroduced in the Silver Age it was as a space cop, science hero. Scott seemed left behind.

That is until the Flash found Earth 2 and the multiverse was born, introducing new generations to the original Lantern. That original DC universe underwent its own reinvention with Earth 2 in 2012, where Trevor Scott and Nicola Scott brought Alan back as a GL. The circumstances of “the young railroad engineer gaining the magic lantern” are nearly identical, but this version was deeply in love with Sam Zhao, who he intended to marry. In a world whose very existence was threatened by Apokolips, the original Green Lantern once again stood immovable in the path of evil. Finally, these two visions of Alan Scott, both heroic and inspiring, have been blended into one. The Golden Age hero has told his children, Jade and Obsidian, that though he was happy and loved their mother very much, he was not being entirely true to himself and finally revealed that he is gay.

We expect to see far more of this new but long-lived character, including in HBOMax’s Green Lantern series.

Need a deeper look at Pride characters in action? Check out these club discussions from across the DCUI.

He is confirmed to be in the next JSA book by Johns and Hitch.

In which issue did Alan Scott officially come out?

The Mystery Is Over

Last week, you heard rumors coming out of KAPOW! Comic Con that a DC Comics character would be gay when reintroduced to readers in DC COMICS-THE NEW 52.

Thanks @darkstarz. We’ll link that issue to the profile when it hoiys DCUI

Nice to have a JSA book coming again