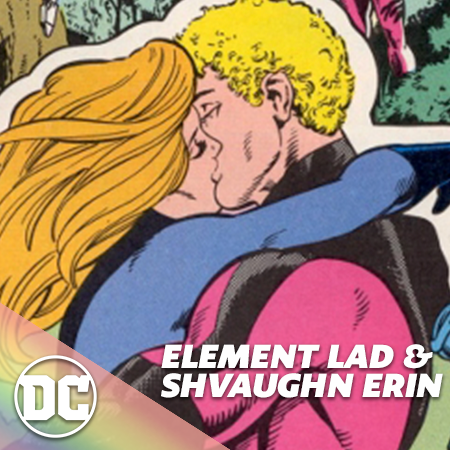 Pride Profile: Element Lad & Shvaughn Erin. Fans reading comics and detecting something unwritten about their favorite characters sexuality or identity is not a recent phenomenon. Legion of Superhero fans were so convinced that Element Lad was gay the question was asked of a DC panel at a 1976 convention. As early as 1964, stories suggested that Element Lad was either uncomfortable or uninterested in romantic entanglements with women. Writer Jim Shooter admitted that he assumed Jan Arrah was gay. Later writers would seemingly backtrack on this by involving Jan with Science Police Officer Shvaughn Erin. Eventually, even this was squared with the original belief in Element Lad’s sexuality when Tom and Mary Bierbuam revealed that Shvaughn was actually a transgender woman who had transitioned in the hope of attracting Jan. When the drug that transformed Shvaughn was no longer available and he reverted back to Sean, Jan said that whatever they shared was in spite of the drug, not because of it. Sure it’s convoluted, but sometimes so is love.

Wow. I never knew about this. I’m learning so much great information.

We’re all standing here going “Huh, I didn’t know that.”

Ditto. Just clicking on re-directs on other pages (this one) I find little tid-bits of which I had no idea.