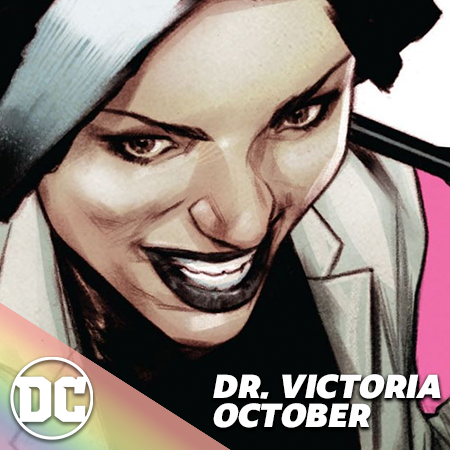 Pride Profile: Dr. Victoria October. “I’m probably the foremost expert in post-human bioweaponry on the planet. Welcome to my evil lair.” The brilliant Dr. October was created by James Tynion, Marguerite Bennet and Ben Oliver for Detective Comics #948 and the Night of the Monster Men story arc. A consultant for A.R.G.U.S., Dr. October keeps a lid on Monstertown and worked with Clayface attempting to find a cure. On the personal side, she dealt with depression, self-doubt and a prickly personality before announcing she was a transgender woman. Transitioning didn’t exactly solve all her problems but it did give her a new sense of confidence. She did however get a congratulations card from Batman. Tynion and Bennet use Dr. October’s work with monsters and her being transgender to explore issues surrounding identity. You can also find a Russian version of Dr. Oktober in D.C. Bombshells.

I remember reading detective comics and when she said she also changed her last name just for dramatics? iconic

That’s so cool. This one was nominated by my history club co-leader @TurokSonOfStone1950. It was a great pick. And, as an aside I love the skunk stripe in her hair.

I know you people actually have things to do, but I wouldn’t’ve had a nominating process, it’d be more like, all the characters I could think of in a month.

Well, 73 creators and characters completed. Nominating is more like people throwing names up saying “hey, this one is cool.” Believe me, we ran the Pride Profile machine day and night until it was burning oil and falling apart. We still did not get to every name we had.

Yeah, I imagined it was something like that, and I’ve learned plenty from them.

cool, got more coming some well-known some a little more obscure.

Yeah, you still haven’t gotten to probably the most well-known LGBTQ icon in DC, Batwoman. And if you can mention Shrinking Violet and Lightning Lass, you’d better have Tim Drake and Conner Kent.

No pressure at all. The answer is yes on one, no on the other. On the second, if that’s how you see them, awesome you’re not alone. But if I wrote that one it would be something along the lines of “many people see” then outline why some people feel that way vs the characters said they are. One difference too is having writers saying “we wrote these characters this way” as in the case of SV & LL. On the timelines of both pairs of LoS couples cited you can see that it took a long time for this perceptive of these characters to become cemented into acknowledged continuity. Which, looks like that’s where Tim is headed now.

Ah, I didn’t see that Shrinking Violet and Lightning Lass were actually said to have been written that way by the actual writer(s). That puts them in a whole different category.

Not every writer over that time, but a number of them did. Those two LoS couples where maybe some of the best examples of coding where it wasn’t necessarily a reader seeing something through their personal perspective or life experience lenses but the writer trying to tell us something without saying it out loud, because they couldn’t.

She’s a pretty cool character. I hope we see more of her in a future book.

I’ve got a fun fact for you about Victoria October, Gotham’s premiere monster biologist, that you won’t hear from anyone else:

At NYCC 2019, I talked to Marguerite Bennett about how she collaborated on the development of this character with James Tynion IV. I would never deadname any real person, but I feel like it’s important you to know that before she changed her name, Bennett and Tynion considered her actual, legal name to be Victor Frankenstein.

Wow, dropping the inside info @HubCityQuestion. Would like that to make its way into the comics

Maybe Looker
Or
Some of the
Creature Commandos

But in the meantime

And show
Being monsters
Is only their exterior.

Which is a little odd, 'cause it doesn’t get much more panache than that.