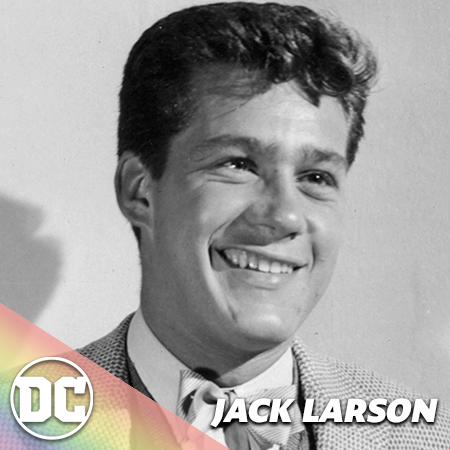 Pride Profile: Jack Larson. For one hundred and one episodes, Jack Larson played Superman’s best pal opposite George Reeves with a style and enthusiasm that elevated the role of Jimmy Olsen in the 1950s TV series Adventures of Superman. But Larson was so much more than America’s most famous cub reporter. A veteran of the U.S. Marine Corps, Larson was looking toward Broadway when he was offered the Olsen part. Like many actors who become widely popular and famous for an iconic role, Larson struggled with separating himself and his work from Jimmy. It was also during this time that Larson came to embrace his sexuality with other closeted Hollywood figures such as Montgomery Clift and his eventual life partner director James Bridges (The China Syndrome).

A talented writer, Larson wrote a poem to accompany a gay-themed Joffery Ballet production and the libretto for the opera Lord Byron. Eventually, like many other actors in his position, Larson began to embrace his iconic role later in life, appearing on television’s Superboy and Lois and Clark, and in Superman Returns on the big screen.

Jack Larson is not Jimmy Olsen’s only connection to the LGBTQ community. The comic book character famously appeared in drag in four stories from 1963 to ‘73. While these adventures are born out of Jimmy’s need to ‘get the story,’ he is depicted as an attractive woman and not exactly uncomfortable presenting in the new gender. Despite the limited number of these appearances, they struck a chord with some readers, including Grant Morrison who nodded in that direction with his Jimmy Olsen-focused issue of All-Star Superman.

Wanted to give credit to @Mae for finding Jack Larson. Our list was done, and weren’t even going to get to all of them when @Mae brought in Larson’s story. Absolutely, had to include him.

Just a small thing, but goes to show that queer people have always been here, and weren’t just invented in the 1980s. Plus, drag is a big part of queer culture, so I was hoping we’d put a bit of a spotlight on Jimmy’s shenanigans!

Yes, and peak behind the curtain, @Mae correctly was a big proponent of including the drag in a much better way than I started with. I bring this up, cuz that like so much of this is about having a conversation where we listen