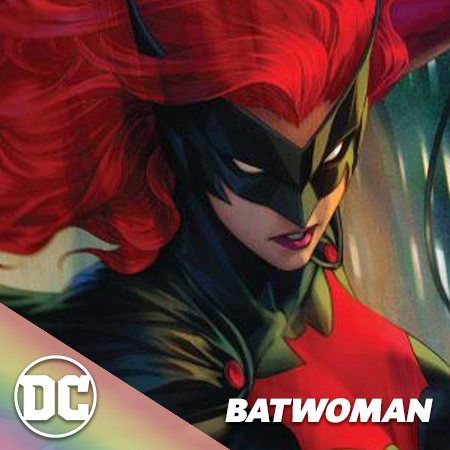 Pride Profile: Batwoman. The revamped Kate Kane went from inception to icon in an instant. Introduced in 52 #7, Batwoman headlined Detective Comics before getting her own eponymous series. Whether it’s the striking costume and crimson hair, her history as a military brat and the heir to a fortune, her refusal to lie about her sexuality to stay in the West Point, her connections to DC stalwarts Sawyer and Montoya, or her general butt kicking awesomeness, fans from across the DCU quickly connected with Kate. Although she’s willing to work with her cousin Bruce Wayne, this is no purse toting ‘lady’ Batman willing to take a backseat to anyone. And, where Batman’s focus on his mission can strain even his closest relationships, Kate has shown a more nurturing supportive leadership style that strengthens her ties to her allies. Detective Comic’s Elegy arc by Greg Rucka and J.H. Williams III starring Batwoman is a masterpiece of story and art that not only helped cement her place in DC history, but introduced one of the greatest villains in decades.

In DC’s Bombshells, Kate is in a league of her own as one of that universe’s favorite characters. Television’s Batwoman debuted in the Arrowverse crossover ‘Elseworlds’ before going on to star in her own show.

The great irony is that the original Batwoman, Kathy Kane, was created in part to dispel any notion that Batman was gay. Decades later, Kate would become the most famous lesbian superhero of all. 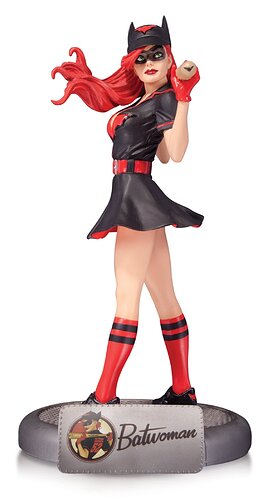 Another take on Batwoman from the Arrowverse

[3 - Ryan] Though she’s still relatively new to the Arrowverse, Ryan Wilder has already forged a unique legacy for herself as both a lesbian superhero and the first Black person to don the Batwoman mantle. Taking over after Kate Kane’s disappearance, Ryan is even more reckless and headstrong than her predecessor but also has a unique perspective into Gotham’s criminal element. Because she was imprisoned for 18 months for a crime she didn’t commit, Ryan realizes that many of those who break the…

And the Arrowverse Kate Kane

[10 - Kate] Kate Kane’s journey through the Arrowverse has been quite the rocky one to say the least. From being kicked out of her military academy, taking up the mantle of the Bat from her cousin, Bruce Wayne, finding out her dead sister is alive and Gotham’s most wanted terrorist, becoming the Paragon of Courage and seemingly dying in a plane crash, Kate’s future is far from certain, but her legacy is undeniable. Not only is she the first lesbian superhero lead on TV, but she managed to provi…

I always forget how amazing her Bombshell design is

That is pretty simply awesome

@msgtv thanks for the thread, and especially thanks for all the links.

I love, love, love the way that they purposefully created this irony to thumb their noses at the early-20th-century DC. Also… How old was Batman supposed to be in that era? Because whenever I think about the old Bat-Family and the rumors that Batman and Robin were a couple, I can never get past the… What, 20? 30? Years between them.