On the CW there is talk of a live action version of the 90s classic. This version is of the girls grown up and grown apart. I was a big fan of the cartoon back in the day, right up there with Dexter’s Laboratory.

What do you think of aging and livening up this classic show?

Sounds like a recipe for disaster. live-action adaptations of animation are almost always disasters especially as live-action is a much more limited medium.

I tend not to like live versions of cartoons. I have never watched any of the Disney remakes. I think that this may be different. It’s not a remake it is taking existing characters and putting them in a more dramatic situation.

It’s not a remake it is taking existing characters and putting them in a more dramatic situation.

That is a very hit or miss concept. Is it taking the logical next step or forcing something, as I would think saving the world together would make an unbreakable bond. Hopefully I am wrong and this is the Dark Knight Returns of the Whoop Ass Girls.

Only live-action Cartoonnetwork adaptations I remember liking as a kid was Ben 10 and Scooby Doo. Those (from what I recall) kept the spirit of the series. They didn’t try to go super ‘young adult novel’ type of thing I’m getting from CW’s PPG’s. 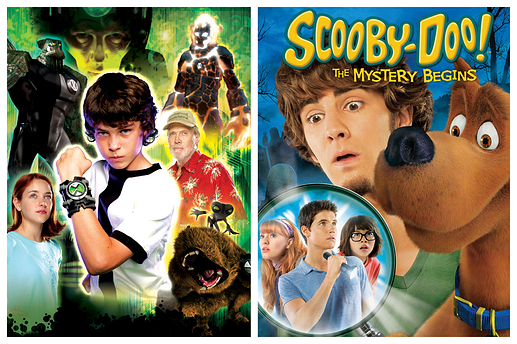 This is kinda like that whole Netflix Avatar show they wanted to make that the OG show runners/series creators walked away from because Netflix wants it more explicitly adult which the OG show thematically did things that can appeal to people of all ages w/o being explicit in ways that involve sex or blood and whatever else Netflix wanted.

These kinds of pitches just gives off vibes of not understanding why people watched the Powerpuff Girls show to begin with. Little Girls kicking Monster + Criminal A$$ just being kids and using their powers in daily life how kids would use them, getting into crazy or whacky situations, etc.

I kind of feel that the story they are selling is a good extension of the original story. They address the girls different personalities and rolls on the team.

I never got into Ben 10 and haven’t seen Scooby-Doo Mystery Begins. The theatrical Scooby-Doo movies were both very fun.

Riverdale seems to be doing really well. They took existing characters and put them in a more intense situation and it is in season 5.

Riverdale definitely has its fans I’m just not one of them. I’m not familiar with the source material either so dunno’ how much that counts as a viewer.

No doubt PPG’s will find its fans and CW will have it run at least 3-4 Seasons if not more. But the potential success of that has no weight in for how it comes across as a premise.

Not saying it couldn’t work in the past, like Ben 10 for instance in the original series took that character and grew him both physically in age and as a person but CW doing this sudden shift from what the PPG’s is to what they want to do doesn’t give me confidence at all.

Well when it was announced I was not sure what to think of the idea. Now I am thinking we may have to view it as completely separate from its source material and that may help. I feel like it could be decent if its done well or it could be awful. I may give it a try. Casting Dove Cameron and Chloe Bennett helped.

If I go to an Avatar convention and say “I love Avatar, but only the live action movie. Not the silly cartoon.” How long do I have to live?

The casting seems really good. I don’t know the other two ladies but the actor from Agents of Shield is very good.

I’m curious if they are going to cast any of the villains or professor Utonium.

Sometimes writers and directors steer too far from the source material. Avatar is another blind spot in my entertainment knowledge.

I LOVED PPGs back in the 90s and would love to see it again, just not in a live action context. Why not just bring back the animated show instead? (provided that Genndy Tartakovsky showruns of course)

Agreed! The original show was great and should be brought back. But I don’t think this show will take anything away from the original.

Hmm. When Berlanti pitched his Riverdale reimagining to the CW brass rumor is that they were all like ‘You’re nuts’, but after they read the treatment they were all on board. If the PPGs can be cleverly reimagined in some way for a live-action presentation then there’s def a possibility that the concept could work.

They did not steer from the source material. They rushed it thinking a whole season could be condensed into a rushed 90 minute movie with a focus of stoicism.

They had some really awful fight scenes, and you can actually see the minions standing around waiting for their cue to move.

Then there was weird BTS actor issues. One of the sponsors insisted that his daughter be given one of the leading roles, despite that she could not act the role. This meant they also had to recast the guy playing her brother so they would be the same race. This also meant all four main characters were now white, so they recasted another of the main characters with an East Indian. All the supporting characters from Fire Nation were then recast to match his race. So all but one key character was recast, and he was cast for his stunt work instead of acting ability to interact with green screens.

A movie about the production would probably be better than the movie.

Did you ever see the Netflix movie about the Fyre festival. Sounds like the format that could be taken with this movie.