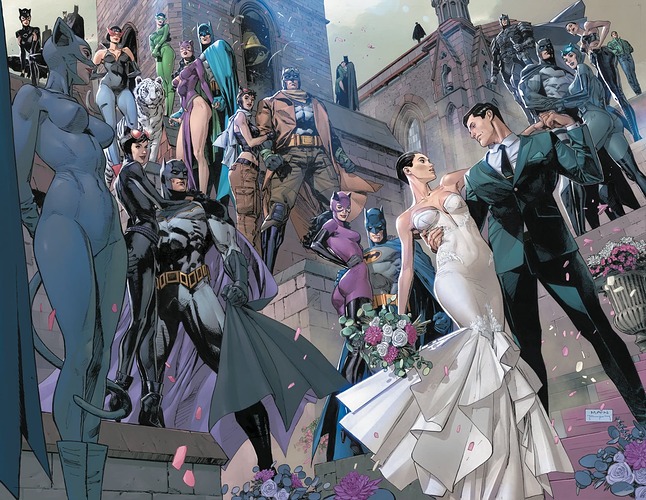 It is! I’m extremely excited! Gonna do a full reread, from Rebirth all the way through all the short stories to Bat/Cat!

I almost think even Helena Wayne is in this possibly. The top right side might be Helena Wayne of earth two. It’s also interesting how they are grouped you have the silver age costumes of Catwoman with the silver age batman with the Timeless classic holding bruces arm, You have year one batman represented by a cape, which is also technically Dark Knight returns batman too.
you have the golden age boat alone which is fitting and close to the figure in the short cape all alone. which again might be a representation of Helena Wayne and she is saying let me into the main canon.

I feel particularly vindicated here, especially when you keep in mind that Batman/Catwoman was built from the plans that King had for finishing his run, if he hadn’t been removed early. I always knew the 100 issue plan was to end with a marriage.

There are hints they may have tied the knot depending on how you interpret the time gap between issues 85 and 86…interesting that 86 was the year batcat broke up in the silver age well 85 was the year they were still together.

We shall have to wait and see! For now, I’m with @HubCityQuestion - and feeling tempted to staple this issue to my Wedding Album volume.

Out of curiosity do you have this one 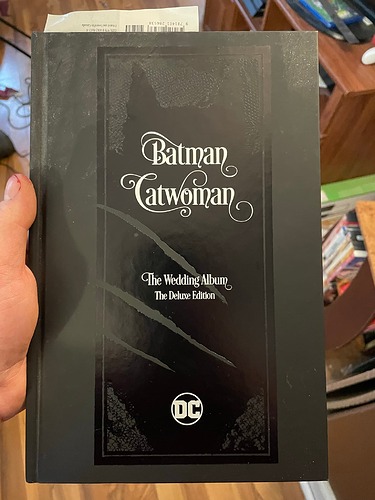 Yes, indeed it is that book! I got it because it was a pretty good price, I already have the Superman/Lois wedding album, so I wanted them to match, plus it had all the covers, particularly the Jock and Joshua Middleton covers. I also keep my Save The Date card they gave out in shops in there!

I got mine for the same reason (cost) on amazon. as the nearest comic shop is about 300 miles away. Really my favorite thing about batman vol 3 #50 was that king managed to pull off making cannon Selina always knowing Bruce is Batman. also in my mind Selina’s reaction in hush (comic) was more she was shocked bruce would trust her enough to confirm it.

Yeah, got it for about 7.50, which is just 2.50 more than Batman #50 would have cost. So to get not just Batman #50 (with a better layout than the actual comic, so you can see the parallels that King laid out with Janin), but it also has two additional comics, plus all of the variants? A real steal!

I enjoyed the full-page panels of the issue of batman and Catwoman through the years done by some of the artists who had drawn them over the years…there going to have to top that and Dc Super-Stars vol 1 issue 17 to really make it a success. there is a two wedding scenes for the golden age batcat in that. However well looking up just how many pages were devoted to that i noticed the wedding dress Sleina is wearing is influenced by the one worn in the possible cover picture a bit by that, then remembered they had been married in other universes and the dress draws from the four dresses Selina has worn to married batman, most influential is the Catwoman Guardian of Gotham dress (i still need to finish that but its hard cause the did not get the personalities right).
stumbled on this article well looking it up makes it easy to compare: 15 Times Batman Got Married | CBR

Honestly…I didn’t like most of the pinups. I like the idea, but I don’t think it worked that well. Only one of those pieces is something I think is a masterpiece…but I do think it’s one of the most masterpiece works of the last decade: 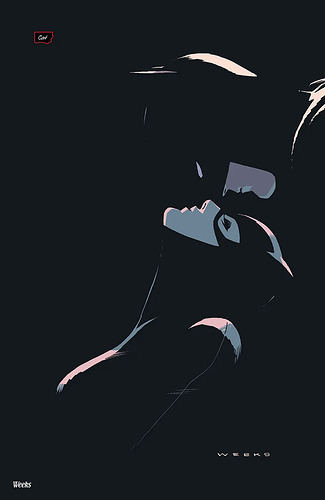 That being said, I hope that King makes this conclusion a really satisfying one, similar to the Annual #2 and the Christmas Special from this series.

your choice is beutifle and clever but the masterwork i would say goes to Jim lees penciled work on page one. just the sheer level of detail work on this it would have taken hours to do. 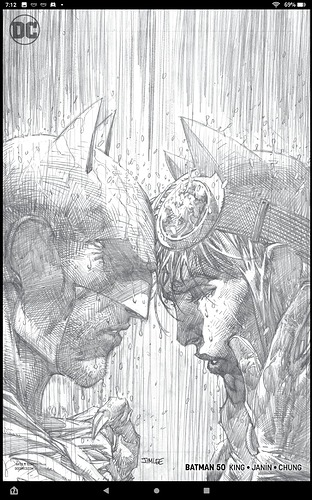 as when you compare it to the inked and color version the pencil is superior. 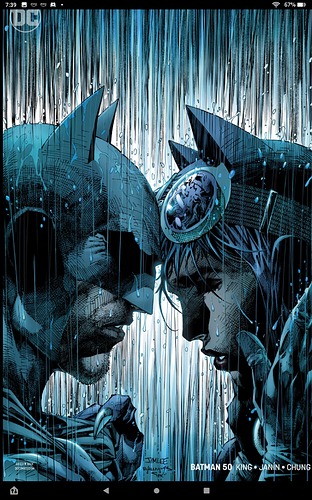 Lee’s work is, as always, powerful. There’s just something so heartbreakingly powerful about the simplicity of the black broken by the white for me.

But I think we can all agree that King’s run on Batman has at the very least given us a huge wealth of amazing art to chose favorites from! 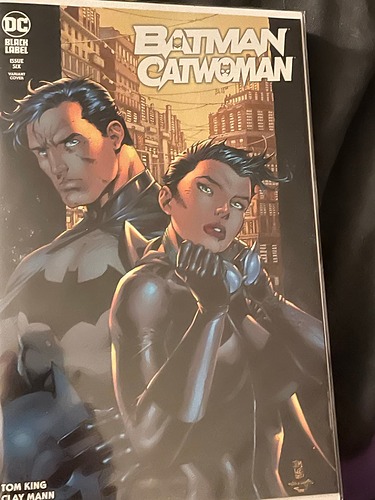 IMG_26311536×2048 225 KB
I am also partial to Jim Lee’s work…however I noticed these do not have a cover indicating an Issue limit like say Batman: The Knight 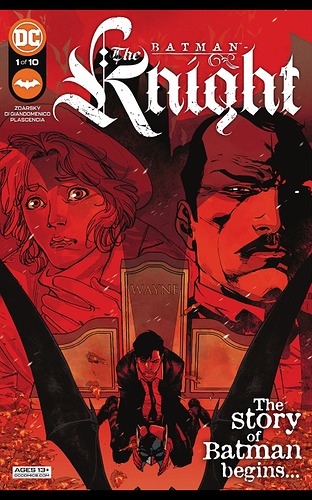 True but I recall there being a numbered label earlier on in issue one of the series. But i could be remembering wrong.

I mean, it does have the issue number. Just not the “of 12” thingy. But I think the same is true of Three Jokers.

HOLY BOLT FROM THE BLUE BATMAN, IT COULD NOT BE. Crazy sleep-deprived theory time: in the first earth two eras

uses a device to transport herself to Earth-one the silver age’s earth prime when she needs advice from her father but can’t ask him. Earth 2 Of the new 52, Helena Wayne finds herself stranded in earth prime with her best friend and, after getting sucked through a boom tube, she becomes

identity. What if in issue twelve, Helena Wayne

uses A boom tube, cosmic treadmill, or some other portal into the multiverse to go to earth prime to get advice on how to handle her

and that changes continuity

again because she arrives on the rooftop with Selina.