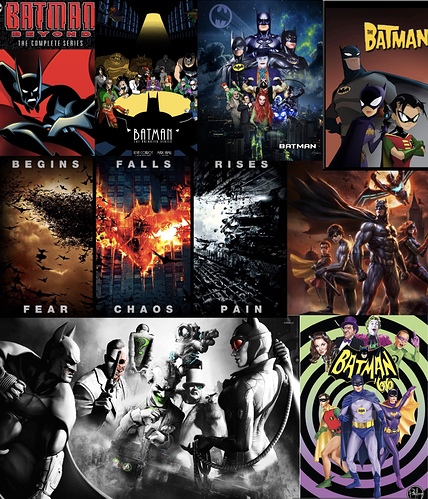 We all know how convoluted and confusing it can be sometimes trying to explain the DCU to someone uneducated on the subject. There have been countless interpretations of Batman and all of our favorite characters across the Multiverse and trying to sort them out and organize them can be daunting. So this is a poll that throws all that out the window. I want to know simply, what is your definitive Batman experience. Ask yourself, if someone knew nothing about Batman and you could only recommend one of these categories to educate them, which would you recommend?

Battle of the Bats

It is redundant having BTAS and the DCAU on the list.

And they say I make a tough polls! LOL! This was one of the hardest poll, cause it’s like picking out which kids do you like the best. I wish I could’ve vote for them all, so I pick Batman The Animated Series.

Hmm…this is a hard one.

I think that’s up for debate. I would argue the BTAS encompasses so much more of The Batman story than the DC animated universe. I felt they should be separate because they are (In my opinion) two different takes on the character both of which containing stories the other does not.

Haha it is a tough one! But I’d have to agree, BTAS is some of the best batman education available haha.

Too true! And probably because some of the heavy hitting talent were involved with both! Paul Dini, Kevin and Mark, I mean you couldn’t ask for better talent. But I’d have to agree that despite being neck and neck, BTAS snags the spot for me. Gotta give hand it to Arkham though for almost doing it with just three games

Ask yourself, if someone knew nothing about Batman and you could only recommend one of these categories to educate them, which would you recommend?

When looking at this the answer was easy for me because I remember when I first played the first Arkham game there was so much I did not know. I thought the character files were great they gave a nice background on the characters and there were a lot of characters I had never heard of before too. It really helped for me since I did not know much. Playing the game really showed me how big Batmans world is. I was always pausing it to ask my boyfriend questions about things it was a great learning experience for me. So just from my own personal experience I would say my recommendation to introduce someone to Batman is the Arkham games.

I picked BTAS but I don’t disagree with you. I remember the first time I played asylum way back when it first came out, back when the only good super hero game was Spider-Man 2, I was blown away by how authentic asylum was to the source material. You could instantly tell there was passion involved. And all of the character models and riddler trophies just gave so much depth and insight into the bat-verse. And the sequels continued that trend. It really is quite educational if you play through all of it and dig through the riddles and side quests. Good call!

The Batman, Teen Titans, TTG, YJ, BATB, vmGLAS Be where the Batman, and all the direct to video release. DCAnimated, oh & HQTAS and DCSHG.

I went with the 1989-1997 film series. It’s a pretty solid representation of the evolution of Batman in his first few decades, and it doesn’t just reflect one comic’s, one comic writer’s, or one comic period’s take on the character.

TB&TB is worth adding, maybe even just a good old fashion mugging as well.