World of Wonder will be reading Superman/Wonder Woman this week and I will be hosting a watch-along featuring an awesome Wonder Woman/Steve Trevor segment this Saturday, February 15th!

Click on the hearts to get transported to events featuring these two couplings!

Are you Team Superman or Team Steve Trevor?

Sound off in the comments below

I did like Wonder Woman and Batman in DCAU like Justice League. They were cute and I could ship it. She’s kinda too good for everyone, as an immortal demigoddess is, and doesn’t need no man, but if I’m choosing between Steve and Clark, it’s always Steve.

Personally I’m against inter-League dating of all kinds. It kind of messes with the magic of the DC Universe. Part of what make it special is that it can be conjoined and segmented at will. To tangle up two separate lines romantically like that creates too permanent a bridge. It gets to the point where you can’t really tell a Wonder Woman story without addressing Superman, or vice versa. Let characters date within their own character pools.

However: I would like to say, @nu52, that it is extremely cool that you are running two separate events for each ship this Valentine’s period. And the combustibility of this poll was exactly what I needed to be reeled into a Watchalong this weekend. I admire your event planning and structure!

Super easy decision, full pun intended. I’ve voiced my opinion many a time on how Steve Trevor couldn’t get near it. I’ll allow my literal hometown hero all the WW he wants. Trevor stay away from my princess. 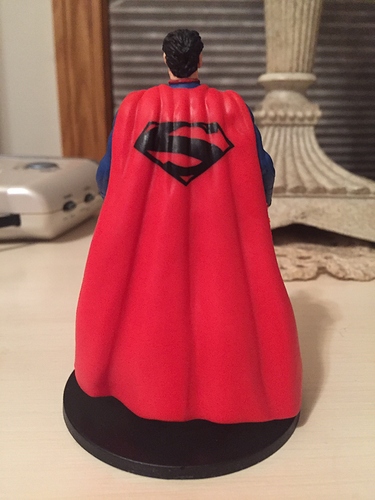 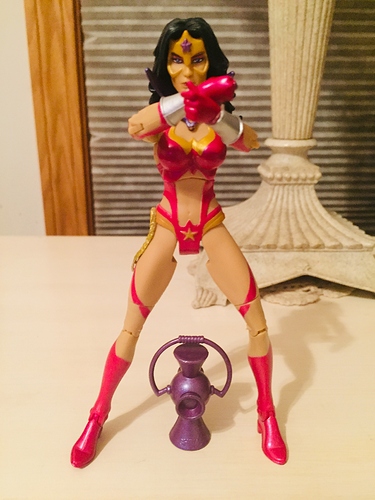 As discussed above, I think the Superman and Wonder Woman want and need human connections. They both want to be part of the human world (at least in many iterations of the characters). That’s not to say exploring their alien/mythological roots can’t be exciting (it is! I absolutely love exploring the pantheons of old), but if these two power houses drift too far away from their humanity and are treated like they’re too much ‘above’ everyone else as major DC tent-pole characters, they can be hard for readers to connect to. Actually, both of these characters can already be difficult to relate to (for me) - in some stories they are almost treated as perfect and infallible… which… eh… Also, as tent-pole characters, I agree that building a relationship with a character within their own solo series or family of books seems to allow more growth for the characters involved.

I think exploring Clark and Diana as a couple in the new 52 was interesting. In the end, it actually helped me appreciate their traditional relationships more. I’ve never been a huge Lois fan, but this experience really solidified her as the right partner for Clark in my mind.

I think there’s a reason why when we often see SuperWonder in the comics, it’s at some point in the future, when Steve Trevor and Lois Lane are effectively long dead, such as Kingdom Come and the Dark Knight Universe.

Another thing to consider as to why I think SuperWonder is in some ways more popular is that, let’s be honest, the two weren’t a couple longer in the span of comics than they were. Like, Post Crisis he was married to Etta Candy, and that span of comics history went for…30 years, give or take. Even in the Golden Age it was a will-they-won’t-they and he was seemingly virtually absent in the Silver Age. Really, this is the first period in comics where I think DC has seriously tried to make WonderTrev a real, viable couple, and it’s only been here for about four years at most.

This is probably crazy rambling at this point, so I’ll just say that I find both compelling and full of potential, and I don’t think one negates the other. Does that make sense? 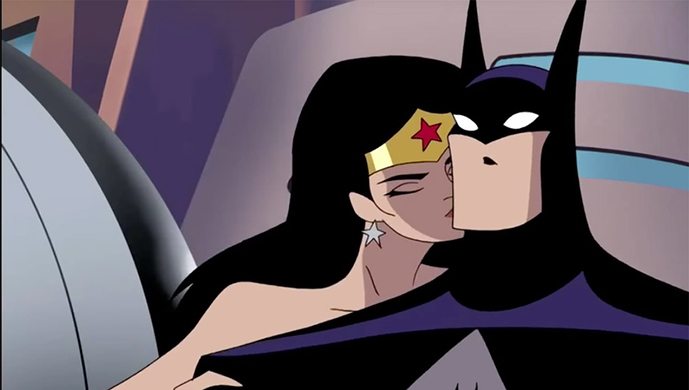 No dating for the Batman. It might cut into his brooding time

What I like about SuperWonder is that I can see them being a friends with benefits sort of thing. And it would likely occur in the future as @Jay_Kay pointed out.

The only WonderTrev that I can really get behind is the Diana and Steve we met when World of Wonder read about them in Smallville Season 11.

Bruce and Diana are an odd pairing, but since their baggage is rather different, it should work at least for a little while.

I love Diana and Steve together. They’re really a great couple, but I’ll always prefer Wonder Woman and Superman. I never cared for Lois & Clark. I like Lois. I like Clark. Just never cared for them as a couple.

Wonder Woman and Superman do share similarities, such as their line of work and the love they have for mankind, as well as their power levels. There’s a reason why Lois constantly gets stories where she gains powers out of nowhere. It’s fun! That being said, Diana and Clark have differing views and ways they approach certain situations. They’re not carbon copies of one another. They challenge each other and it’s wonderful.

I also don’t subscribe to the notion that Lois is what ties Clark to humanity. Clark had an entire childhood and upbringing full of love from his caring parents and friends. Clark in his adulthood has Kara, Jimmy, Perry, Bibbo, etc. If he’s only invested in mankind because of one person, that’s kind of sad.

You all made great points. Just going to reply to some comments now. Don’t mind me.

having been denied normalcy by the circumstances of their birth

I can see that from Clark’s POV, but not Diana’s. She was born a Wonder Woman among a race of Wonder Women. She had a typical upbringing for an Amazon.

I’m not exactly sure what you mean by this. Men and women, to me, don’t need to be in relationships to feel like men and women.

I can also see what you mean about inter-League dating. It’s not the smartest of options. As far as stories being conjoined and segmented at will, I still feel that it’d be no different to people asking where Flash is when Green Arrow needs help, etc. Just because two people are in a relationship, I don’t believe they’d always have to be together.

Thank you for joining the watch-along Hub. Really was a blast

She’s kinda too good for everyone, as an immortal demigoddess is, and doesn’t need no man

if these two power houses drift too far away from their humanity and are treated like they’re too much ‘above’ everyone else as major DC tent-pole characters, they can be hard for readers to connect to.

Yeah, many people share your thoughts on this. Totally understand. Relatable characters are necessary to do just that, have the readers relate to the story. I guess, when it comes to comics, I’m just fine not relating to characters. I personally prefer to read about both types of characters and stories. The relatable and the not-so-relatable. I like characters that you can aspire to. There are so many characters that are “flawed” and are “raw” and they’re awesome. I do appreciate the infallible sometimes though. It’s not to say Diana and Clark don’t make mistakes or have their faults, but part of the reason I read comics is for that sense of heroism that you really only get when you see/read Wonder Woman or when you see/read Superman.

Aww, that’s sad, but true. Steve and Lois are human after all and Diana and Clark will eventually lose them no matter what. It’s heart breaking (Chris Pine’s Steve

Like, Post Crisis he was married to Etta Candy, and that span of comics history went for…30 years, give or take.

That’s a good point. For decades, Steve was Etta’s love interest. The thing is that in other projects outside of comics, some of which are far more popular, Diana and Steve are linked. Lynda Carter’s Wonder Woman is linked with Steve. DCAU Diana has a strong link to Steve in the animated Justice League. Her first solo movies (animated and live action) feature Steve as do her second solo movies (Bloodlines and 1984). They’re even link in DC Super Hero Girls. Those appearances definitely keep them at the forefront of people’s minds. Diana and Clark really only had a few scenes in the animated movieverse and a few scenes in JL Action.

I figured that one would win by a landslide

That’s definitely a popular ship. I was going more for actual relationships, where that was more just a little flirtmance, but WonderBat has a strong following for sure.

The only WonderTrev that I can really get behind is the Diana and Steve we met when World of Wonder read about them in Smallville Season 11.

Thank u. The only reason I chose that out of my collection is she’s been in that “I don’t think so pose“ since she was in the box. 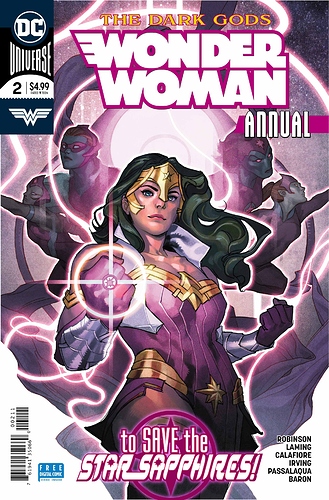 I like how they reimagined that costume in the Rebirth comic.

So Beautiful. One of my favorite covers. Great find for an on the topic dig. I love seeing that.

Any day over Trevor & if not Supes.

First off on, Wonder Woman and Batman – I think there’s definitely some interesting parallels and honestly more so than even her with Superman.

Both are in their societies born in a place of privilege. Bruce is of course born of old money, conceivably without a want for anything. While Paradise Island is in many ways more equal than in ours, Diana was still born as a princess, someone to be revered.

Both are skilled fighters. A lot of times when, say, a JLA story focuses on Batman and Wonder Woman, it’s with the two sparring, in some ways equal in terms of skill. I like to imagine that they’ve both teached each other different moves over the years they worked together.

Finally, they’re both on a mission that they both know, deep down can never be fully achieved. Batman is fighting a war on crime, and Diana is out to create peace on Man’s World.