Poll: Rank (Almost) Every Batsuit Ever

I’ll put that on my todo list. A quick remark on that would be the use of contrasting color or texture belts in men’s fashion, coming from the sharp contrast of the utility belt.

Gotham by Gaslight anyone? I love that one

Gotham by Gaslight anyone?

Absolutely, that is my number 1 choice and should be in the poll options.

As far as suits go, Bale’s was A M A Z I N G. Not my fave representation, but the suit was great.

Fun fact: Bats, like most mammals, have nipples. Therefore, there should never be hate on the batsuit having nips.

You asked for it, so here it is. Only 1120 words. I could do more but decided to only spend a half a day or less researching batsuits of various eras and styles and staying within mainline continuity. I do have the psychology of Vandal Savage to dissect. (And yet another shameless plug for The Psychology Of Supervillians Club..March 2020 - Vandal Savage ) To long for one post so I broke it up into two posts. Pre-history influences up to 1961. 1961 to present day.

The Batsuit influences and influence through the ages: Part 1 (Pre-history to 1961)

We can see both the Batsuit impact on the American psyche but also the inverse of the the American and British psyche impacting the batsuit.

First let us look at the historical color scheme. While the base chest and leg covering is often gray, most noted colors are blue and yellow. We see this in the cape, cowl, gauntlets & boots clearly in blue. The utility belt clearly in yellow. This can be clearly seen as far back as Detective Comics #35 January 1940.

Now we look back at where this color scheme may have originated, especially on a subconscious level. In 1940, it would be fair to say that Alfred is around 50 and bruce around 28. That would mean that Alfred would have been born approx 1890 and Bruce approx 1912. This means that Alfred would be roughly in the 18-20 year old range at the time the cub scouts were formed in England. We see throughout Alfred’s timeline that he is naturally nurturing and excels at bringing people, often kids, into the fold and encouraging them to study certain areas, earning the equivalent of merit badges from Batman as their skills progress. This shows his affinity for being a Cub Scout leader in his young adulthood, as a way to mentor boys prior to going from the Britain to the US.

Given the age of the death of his parents, Bruce would have been a natural fit for the American Cub Scouts which started in 1918. This would have been a valuable tool to a young Bruce Wayne and given him the experience in earning merit badges, the knowledge and drive to expand that to all the other areas delved into and mastered in his teenage years and early adulthood to prepare him to be Batman. It would be natural for Alfred to encourage this, as a way for Bruce to, if not heal the wound of his parents murder, certainly put him on track to understand various disciplines and encourage that growth.

What are the main Cub Scout colors, mostly blue with a noticeable yellow highlight, at a key movable body point. In the Cub Scout case at the neck, in the batsuit at the waist. Why are these critical. Whether consciously or subconsciously, both Bruce and Alfred would have been aware that the yellow Cub Scout neckerchief was a way to draw attention to the face. Inversely, in the case of the batsuit, it is deliberately put at the waist to draw the eye away from the face, which will positively impact in helping keep Batman’s secret identity.

So now we have seen how a specific area of both the British and American psyche could impact the color choices of the batsuit. It is also worth noting throughout much of Batman’s history from the late 30s thru the 70s (at minimum) these stories were still tailored in a such a way to appeal to young boys, some of which were cub scouts, so they could relate to a color schheme that early in their life came to represent values (Trustworthy, Loyal, Helpful, Friendly, Courteous, Kind, Obedient, Cheerful, Thrifty, Brave, Clean, and Reverent)

Now lets move to Batman #39 Feb 1947. We move into the post-WWII era up until 1961. It is clearly evident in the sculpted form on the gauntlets the cape edge and the ears on the cowl a wider line, but the ears being thrust back more and slightly shorter than the 30’s costume to frame the face better. This was a precursor to the effects scene by double breasted suits and fedoras in mens fashion in the 1950’s. Also one can look at the gauntlets and ears as representations of the fins on cars of the 1950’s

The Batsuit influences and influence through the ages: Part 2 (1962 to present day)

By the time we get to the 1961, Batman #139 April of 1961, We see a much more sleek silhouette in both the cowls draping over the shoulders, the boots looking as if the are an extension of the leg portion of the suit, and the gauntlets “tails” being less pronounced and more slimline. We can see this slimline look in the mid 60’s for mens fashion in the narrower lapels and more pegged (narrower) pant cuffs, creating a more streamlined look as well, compared to the “sack style leg of the suits of the 1950’s. In the same April 1961 issue you can clearly see the bold color effects on Batwoman’s bright yellow and bright red costume accents and Batgirl In red and and bright green, but both still sporting the much longer “cowl bat ears”. The these colors and lines were precursors to the A-line style dress in bold colors very popular in the mid 60s and beyond. Also pay close attention to Batgirl’s skirt hem being noticeably shorter the it’s late 50’s early 60s hem line, but, that would get shorter and shorter through the 1960s, eventually ending up in the miniskirt.

We can’t get through the 1960’s without the change in emblem to have a yellow “look at me” background. This occurred in a permanent way in late 1966, sometime between issue and #183 and #189 . This also matched up the comic and t v look. This symbol continued of yellow and black, high contrast, continued through the mid 60’s to the end of the 80’s. A time when mens fashion was much more experimental in cut, color, pattern, and noticeably longer or shorter dress shirt color points, and contrast and still expressing a “look at me style”. This is perhaps best incased from the 60’s psychedelic, into the punk and buccaneer fashions of Vivienne Westwood from the 60’s into and thru the 80’s. The influence of Grunge music started to change mainstream mens fashion away from the “peacock era” of mens fashion and its sharp lines, contrasting colors, etc into a more muted color palate and simpler more loose fitting forms. The symbols yellow and black contrast would come and go thru the 1990s until Batman $575 April of 2000, when it went back to a solid black bat symbol only, no yellow. As was shown between the mens fashion fight of grunge vs preppy vs skate culture of the 1990s. Since 2000 men’s fashion has remained rather stagnated to much more standardized form and more neutral color palettes, and mid-range lapels we still see today. Certain “retro forms” in Mens fashion have come and gone during that time, as has the form of the straight black bat symbol.

There you have it.

Outstanding @DeSade-acolyte! I knew I could count on you to bring a thoughtful viewpoint and educate us on not only the history of Batman but also the history of fashion. Only on DCU do we have such scholarly opinions so often. Bravo!

There are some things I know and somethings I don’t. I stay far way from non-applied mathematics and geology and direct stocks and bonds discussions. Way not my areas. Fashion is an area I know a lot about, going back through various 20th century decades and different eras, all the way back to Rome. My Egyptian and Ottoman empires are a bit weak and I know little of Asian historical fashion. However, most western civilization that really used strong design, I have a more than passable grasp of.

Back to Comics:
For example, look at Power Girl in her original 1976 costume. There is little doubt when looking at that costume, it took styling cues from that particular era. The large “peep hole” in the top, certainly a mix of the low v-neck dresses of disco combined with the ripped openings of punk fashion. The cape having no scallops, but asymmetry in the way the cape is attached and the cuff on the boots. All elements of mid 70’s fashion.

That is just one. Given time, I’m sure I could probably write a doctoral thesis on the topic.

Back to the Batsuit. (as I don’t want to derail the thread, but give my posts context.)
I think the best is Gotham By Gaslight, because it is so period correct in it’s design, in how it has been put together (its structure) and the materials used.

It is the most spot on, era appropriate Batsuit ever. Hands down my favorite by a mile. 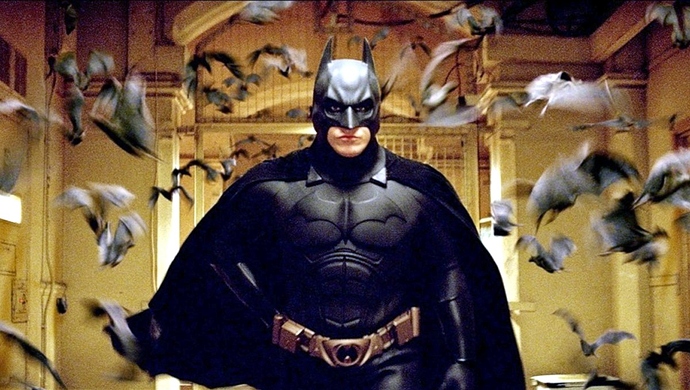 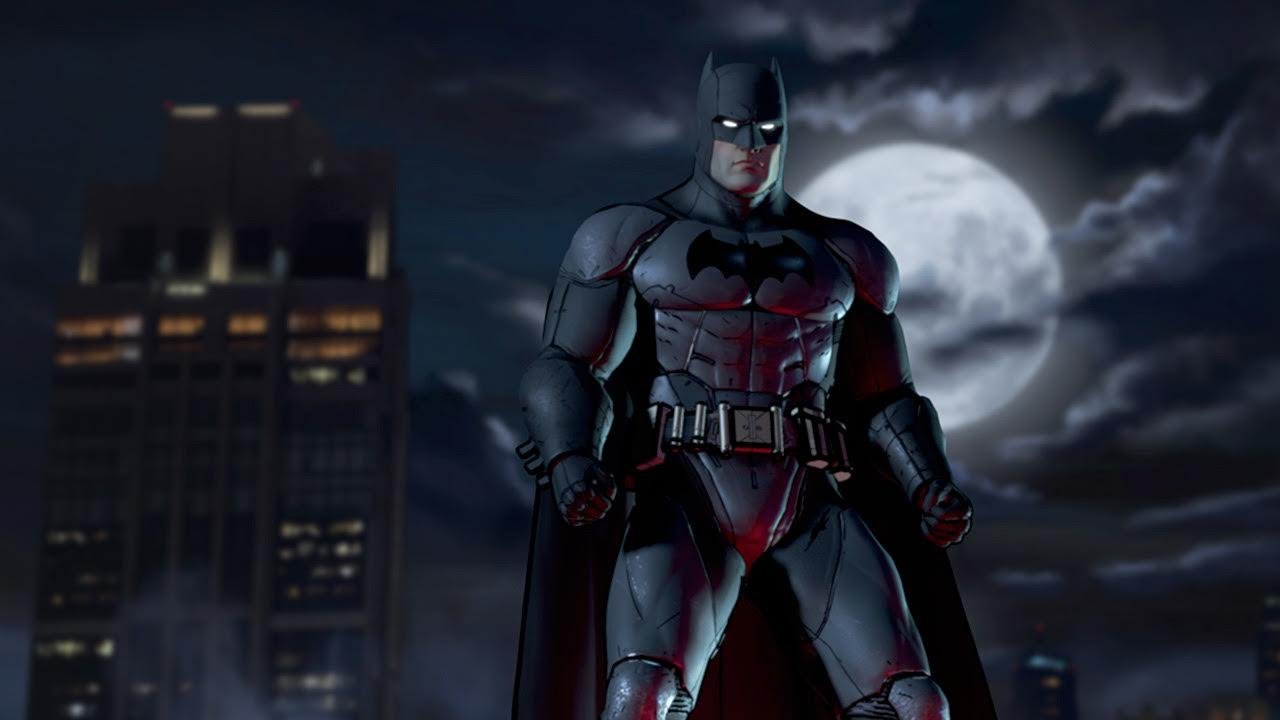 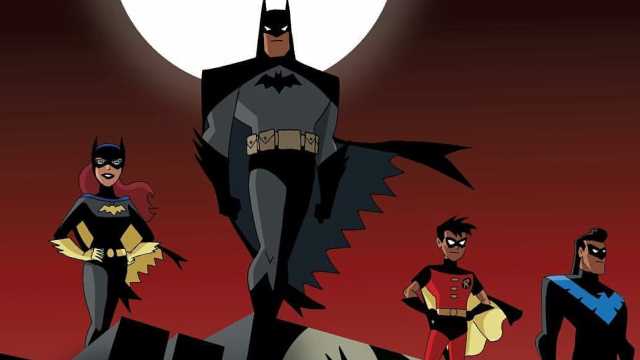 My favorite Bat suit (that’s not on here) has to be Arkham knight beyond suit and Batman one million. I just like the armored bat. 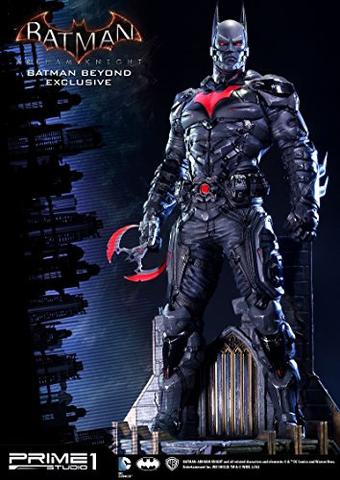 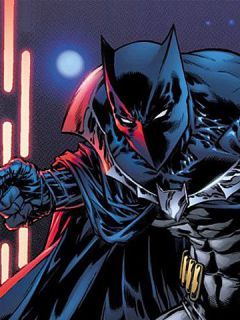 Why does he remind me of Ah-nold? 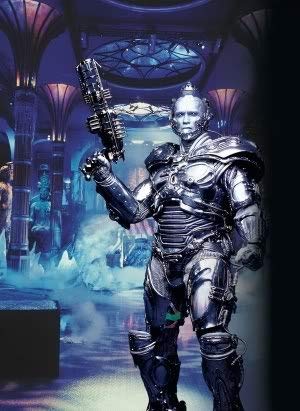 Some of my all time faves didn’t make the list so, in no particular order. 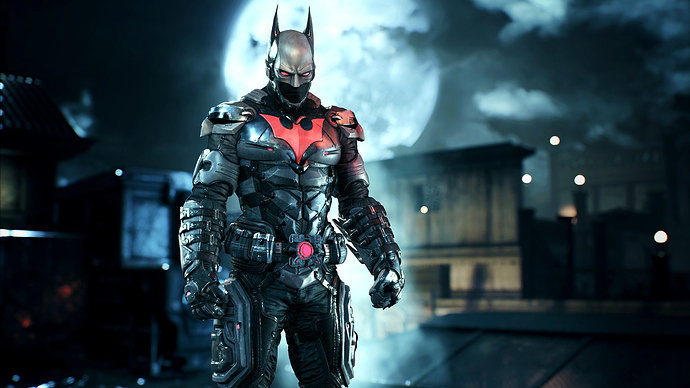 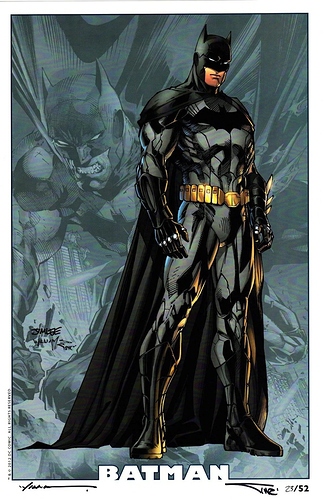 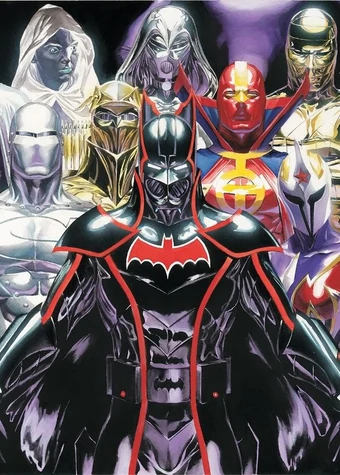 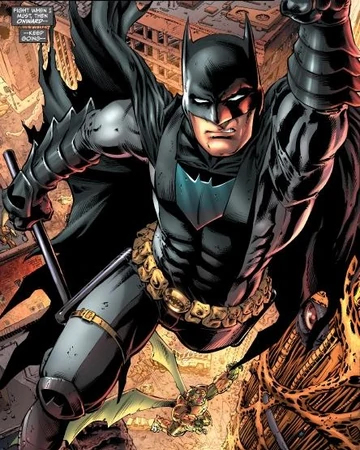 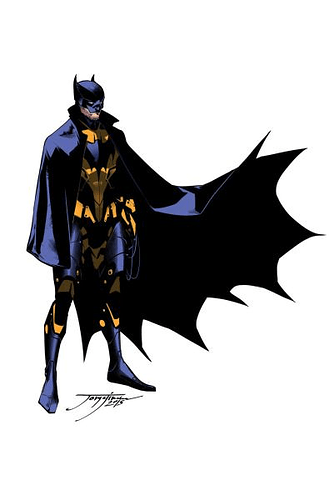 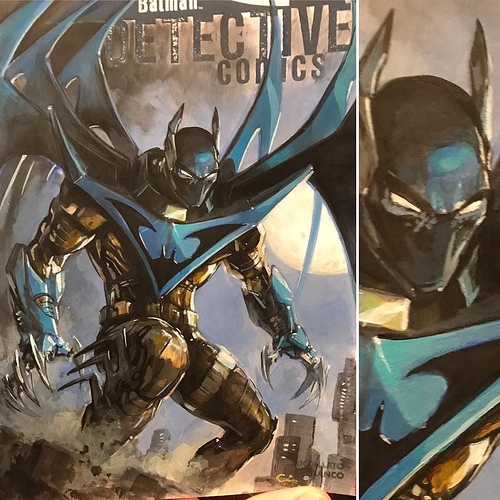 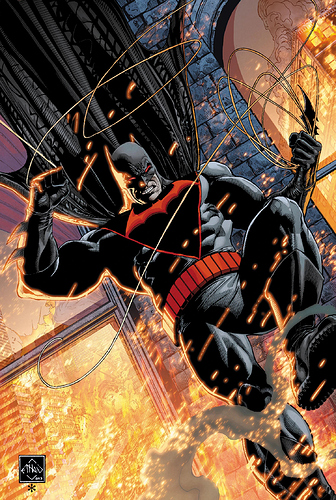 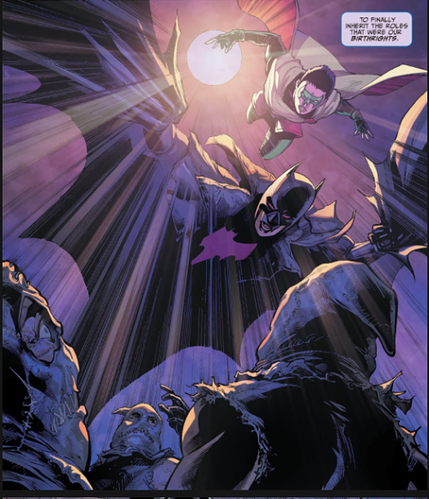 I never noticed that now that’s all I see. Very nICE

I do like the Batman Damned suit. Maybe because it looks almost realistic and the artwork too. Makes you feel like it’s something plausible. 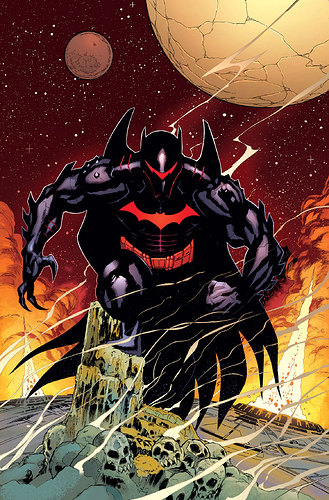 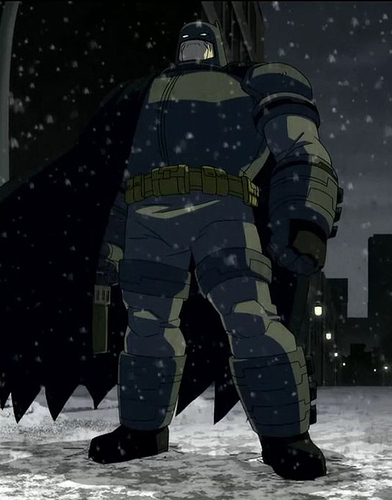 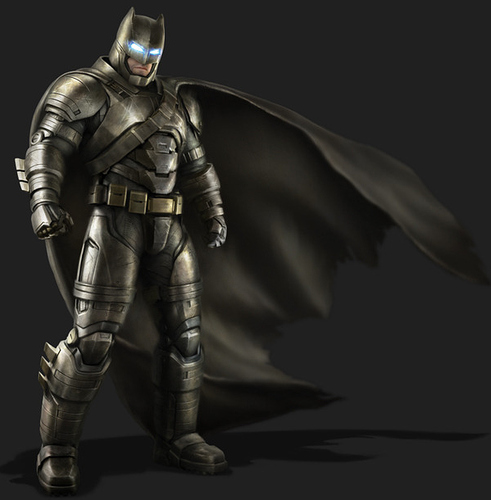 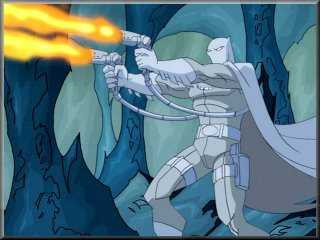 Blue & Grey to save the day.

Oh, and the New 52 suit was a worthy omission. I’m glad it’s getting the lack of recognition it deserves.

I debated this…it was too close to the “modern Batsuit” (seen from 2000 and most notable in HUSH). I had to be picking at what qualified as it’s own suit, especially since most artists have their own take. To be honest I almost didn’t include the Rebirth suit, but the bat outline on it was different enough that I had to.