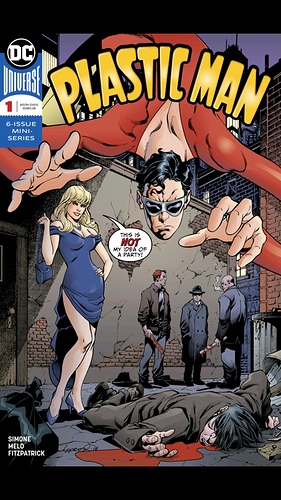 Agreed. Talk about it comes up here and there, but I don’t believe a Plastic Man movie has ever been said to be in Active Development at WB. That needs to change as Plas deserves a flick or two.

@Moe.Vargas If Todd Phillips got the gig, I’d prefer to see him approach Plastic Man more from a Hangover POV and less from a Joker POV.

A good Plas movie should be like a good Plas comic: A good mixture of funny and serious.

Ed Helms could be a good Plas too, now that I think of it, and we know he likes working with Todd Phillips.

I know that Marlon Wayans said he was interested in playing Plastic Man. While I’m not a fan of all his work, I think a good script combined with his improv skills could make for a great movie.

You need someone who is good at physical comedy, my pick is Tony Hale.

I doubt he would ever do it (nor do I think Warner Bros would be willing to take a risk like him), but Eric Andre is probably one of the top physical comedians right now. He would be one of my top picks. Then again, Warner Bros owns Adult Swim (where Andre’s show is), so who knows. Maybe I should start a petition lol.

Ben Schwartz is actively campaigning for the role of Plastic Man. If they make it he would be perfect for it!

I could see that as an option too. I haven’t seen his physical comedy before, but his work on Parks and Rec and Duck Tales shows he’s super talented and funny.

I 100% remember there being an announcement around 11 months ago on DC Daily.

There are a ton of things that are “in production.” The Booster Gold script has been completed for a while now and nothing’s been done. It’s a super common practice to order a script or “start pre-production” and then just have a film sit in limbo for the rest of its life. The best example of this is probably the live action Gambit film with Channing Tatum.

Yeah, Zach Stentz, the screenwriter, said it has been finished and he handed it over to Warner Bros. It’s been sitting for at least a year now.

Projects get announced all the time and end up going nowhere or put on the back burner for assorted reasons. Just part of the machine that is the entertainment industry.

A Legion of Super-Heroes movie was announced as being In Development in…2014 or thereabouts. Five years later, our multiplexes are still sadly sans a Legion flick.

I’m onboard for a live action Plas movie, but he also lends himself extremely well to animation. If WB Pictures and WB Animation were to focus on an animated Plastic Man movie, they’d get no argument from me.

That’s basically what The Mask is.

Kinda sorta, yeah. The best thing about that flick was Cameron Diaz. I also think The Mask is one of two good movies she’s been in, but that’s me.