My dream is to make Batman movies and other superhero movies. I want some ideas of a Live-Action Batman movie since I don’t think any of them has gotten everything right. I also have some rules I want to say, not in order.

Adapt All-Star Batman and Robin the Boy Wonder with Tommy Wiseau. Time to make the world’s greatest comedy. Greg is Batman, and Tommy is Robin.

I would like an adaptation of the first Clayface comic, I’d like it to take place during the time it was written, because it doesn’t need to be adapted into modern times. Likewise, I would have wanted Hitchcock to direct it. He’s the master of suspense, not much else to say about that. If I’m running with the theme of older people, Bela Lugosi would’ve killed it as Basil Karlo, he just has an ominous presence. Not sure who I’d cast as Batman though…

Jon Hamm as Batman. He would be perfect for a golden age Batman.

An idea I had for a Batfamily movie for the DCEU:

The Batman had not always fought his War on Crime on his own. He had allies who fought alongside him: Dick Grayson, the first Robin who left the nest to become his own hero as Nightwing; and Barbara Gordon, aka Batgirl, and Jason Todd, the second Robin. But that all changed when The Joker hatched his worst plot yet, crippling Barbara in the process, and when Jason went after the Joker himself, he suffered and died for it. After that, Batman vowed to never let another fight his battles.

Years later, the former allies are in tatters. Barbara regained the use of her legs, but still has nightmares and feelings of survivor’s guilt. Dick regrets not being there when his family needed him. But it all changes when a teenaged hacker named Tim Drake finds them and tells them that Batman needs their help. He has uncovered a vast conspiracy: the Court of Owls is after Batman, and only they can help stop them.

We seem to get the same villains in Batman films, but I’ve always wanted to see something with the Ventriloquist set in the Tim Burton/Michael Keaton continuity.

In this version, Arnold Wesker works for an insurance firm. He’s the office old guy (old not only in age but old as in the person who has been consistently with the company). He’s quiet and meek, but if given the chance he’ll wax poetically about his childhood; how his father let him stay up late to watch old gangster movies with him, how he’d watch Howdy Doody and how his father would tell him stories about going to see Vaudville shows.

Everyone in the office humors Arnold, but as time goes on, his new supervisor–the son of his previous employer–keeps hinting that he should retire. Arnold politely declines, saying he’s still got a few good years left in him. His employer isn’t interested in how many good years Arnold has left. He’s more interested in bringing in one of his college buddies to take Arnold’s spot so they can hang out during work hours. He lays it down for Arnold: you’re old, you don’t have a family and no one cares about your childhood. If you don’t retire now, there’s gonna be some irregularities in the books and the blame will fall on poor old Arnold.

Arnold walks home in a stupor. He comes home to his empty apartment and looks at all the things he held on to: movie posters, old programs and a case. He thinks about the good times he had with his father, but those happy memories are interrupted by his boss’ words “No one cares about your childhood.” “The old must make way for the new” Arnold hears a new voice…a voice coming from the case. It tells him he shouldn’t take this lying down. It tells him that he doesn’t deserve this treatment. It tells him that this new boss is gonna run the company into the ground just to hang out with his college buddies. It’s his father’s voice, albeit with a Gagney-esque accent. He opens the case to find the ventriloquist dummy his father got him for his birthday when he was younger. He pulls the dummy out of the case, looks it in the eyes and says “Go on, Mr. Scarface…”

How does Batman fit into this? Keaton’s Batman is a little older now, reaching that point where he wonders if his age is affecting his ability to be Batman; he can’t do this forever. He see’s Wesker as someone else facing his own mortality and wants to bring him back before he goes too far over the edge.

My pick for Arnold Wesker aka The Ventriloquist…John Lithgow. I found this piece of fan art online and it’s perfect. 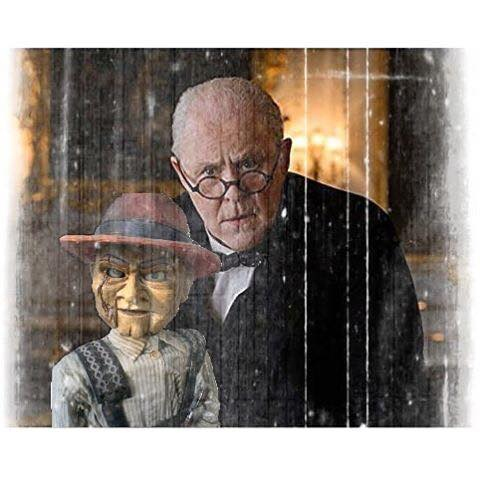 Oh, please give me a Batfamily teamup movie already. I don’t care what director, what actors, what setting, I just want to see Bruce, Dick, Jason, Tim, Damian, Barbara, Cassandra, Stephanie, Alfred, and optionally Ace on the big screen at the same time.

Yeah, I just want to see the bay family more often in films and done right. Give them justice!

I see (if he was still alive) Alfred Hitchcock make a different Batman movie, none of the films are scary, just the perfect type for a Batman movie.
Plot: Okay, This is a bit strange, but I would love to see elements of the Superheavy storyline from the new 52 Batman comics to be added in. Like bloom giving people powers. Bruce has been Batman for around 8 years, and has started taken a new partner. Dick has already become nightwing and Jason dies 1/4th into the film. So, he is in that dark “Maybe I won’t kill you, but your hospital bills will” phase. But to help him take on bloom, he needs someone new. That person: Bluebird. She is personally my favorite bat-family member, and would be cool to see in film form.
Comics I would base:
Superheavy (villain)
Hush (mystery elements)
Earth one (Alfred would have to be that badass)
Cast: Batman: Stephen Amell. Did great as arrow on my opinion.
Bluebird: Daisy Ridley or Zendeya.
Alfred: Daniel Craig
Bloom: Andrew Garfield. He’s a great actor and I could see him giving a short foreboding monologue.

Sorry. Had more ideas. We don’t know who bloom is. We see his backstory through small speeches and first person flashbacks. All we know is that he was involuntarily a subject for Gotham’s Cadmus, witch he destroys. His plan is to “restart” Gotham. Show the world that anyone can be a hero. Or villain. That’s what the public thinks. He is actually trying to show that people are evil, and only fight for themselves. Bluebird has her comic origin. Specifically, taken from the Batman new 52 annuals.
I also forgot to cast nightwing.
Neal Patrick Harris, if you didn’t know, he voiced him in under the red hood. It would be perfect.

The Doom that Came to Gotham
dir: Guillermo Del Toro

My ideal superhero movie, if I was making them myself though, would adapt some of Mike Grell’s Green Arrow run, with movies like Dirty Harry or First Blood serving as a reference point- instead of a typical modern superhero movie it would be grounded, with fairly personal stakes and lots of focus on Ollie and Dinah’s characterization.

This serves as a sequel to my pitch a Batman movie post I made, and this is the same thing but with a few more rules and things to do. I’ll list them real quick in order

Step 1. Choose the director you would want for the film.
Step 2. Choose the Batman comic books you would want to adapt for your own Batman film
Step 3. Explain the plot (not the entire plot, but explain how it would go).
Step 4. Cast every character you want in the your Batman movie.
Step 5. (Optional) Make more than one film (maybe after you pitch one, or maybe even a prequel).

Adan West-esque Batman’s post Crisis adoption of Jason for the World’s Finest series. Clark is furious at him for bringing a kid into their battle with MR. Mxyzsptlk.
Movie 2- Two Face unleashes all the Bat rogues. Bats calls in Clark to help round them up not knowing Two-Face planned this and brought in Parasite as his ace in the hole. Jason uses the emergerncy Kryptonite supply to defeat super Parasite. While all three are distracted on dealing with Parasite Two-Face shoots Bats in the back killing him instantly.

Movie 3- Jason takes on the mantle of Batman becoming a far meaner version. Public trust of superheroes hits rock bottom as a result, and the president orders Clark to defeat Bats. Bats brags that his kryptonite will win it for him only for Clark to use his super speed to take the lead case before it is opened. He knocks Bats out and takes him back to Alfred calling him a disgrace to the mantle. He then hears about a disaster at The Daily Planet. Before he gets back Parasite has killed everyone there.
Movie 4- Clark banishes Parasite to the phantom zone and gives up his normal life becoming the government’s attack dog. He is ordered to force the other heroes into retirement, and only Green Arrow tries to stop him. Clark removes his arm. Jason retires as Batman and watches Gotham become ruled by the new criminals, mainly The Mutants

Movie 7- Master Race. In this version Batman dies as the Lazarus Pit is only temporary, and Carrie becomes the third Batman.

The third post I make about having all of you talk about pitches for a Batman movie. I again have some rules that you don’t really have to follow but it gives some more ideas for what you would want.

It would also adapt The Killing Joke and show Barbara Gordon being shot by the joker shortly after Jason’s death, causing Dick to stop speaking to Bruce who becomes completely obsessive and isolated.

I think I would cast younger actors for Ben Affleck’s Batman.