Pierce Brosnan rumored for Alfred in The Batman

IMDB, Movieweb and other outlets have mentioned over the last day or so that James Bond could potentially be playing the next big screen Alfred in The Batman.

If it can happen, I’m all for it. I love Pierce Brosnan, and I think he’d make a great Alfred.

@biff_pow You said that with a classy pipe in your mouth whilst wearing a tweed jacket and looking out onto the veranda, yes?

I’d be for it. Though my pick has always been another James Bond, Timothy Daulton. He’s the Chief now, obviously.

I said that while being Pierce Brosnan!

I just hope he goes with the balding comb over look, all the live action Alfreds have had too much hair. 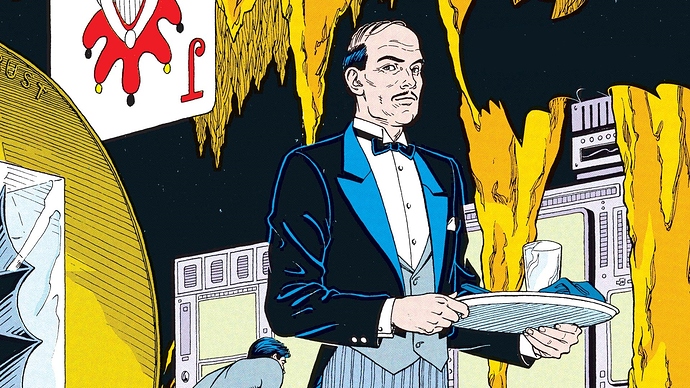 Im all for this

James Bond as Alfred… I really like the idea!

That would probably make Alfred cooler than Batman!

Pattinson could get some acting tips from The Broz.

Or talk to him about his gigs with Robin Williams, Famke Jannsen (happy sigh) and Renee Russo (happy sigh #2).

Don’t be surprised if they don’t bend the rules on this one. All the alfreds have been white British dudes in the movies and on Gotham.

@Wildstorm-Jeff I’m reminded of when Darren Aronofsky was rumored to direct a Batman: Year One movie around 2002 or '03. Reportedly, his Alfred would have been a mechanic nicknamed Big Al.

Regarding age, Alfred’s always older than Bruce, so Broz could still fit into Matt Reaves’ vision. Of course, I’m being optimistic as I’d love to see Pierce in the DCU.

If Alfred fizzles out for PB, he could always dye his hair white, drop the accent and play King Faraday.

PB is 66, so he’d be at least 30+ years older than Bruce. So that age is within the bounds of raising Bruce, post parent murders.

I’d be absolutely thrilled to see Brosnan in this role! <3

Finally, the answer to the real name of the man calling himself Remington Steele! It all make sense now!

He might chuckle at getting the finger from her though.