Didn’t see a thread so made one.
This thread is to discuss season 1 of HBOMAX’s Peacemaker. Chat, lurk, theorize and enjoy. 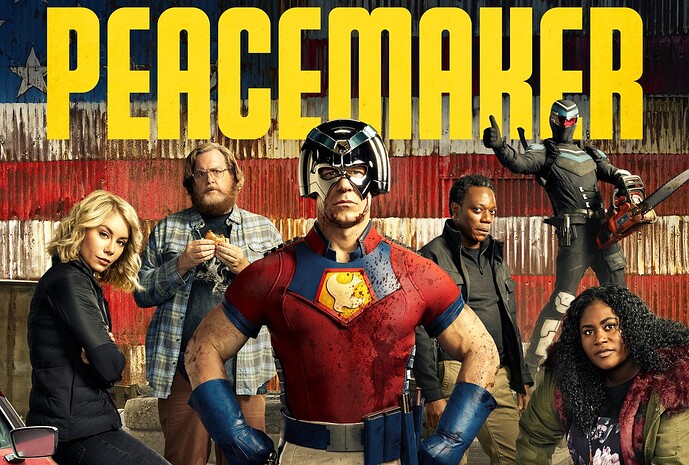 So far I like it!!! I found it much better than Doom Patrol, and Stargirl. Titans is second to this. Looking forward to see how this goes.

Crazy start. Definitely more over the top with that R Rating than I thought.

As for the show itself it’s more interesting than I thought. But first those opening credits I didn’t see coming but are hilarious

Peacemaker is out and thinks he’s free but then is up with another mission from Waller. The team seems interesting. Some new and retiring characters learning more about them.

The Rookie being Waller’s Daughter. A twist I didn’t see coming. And same goes for Waller’s appearance.

Judo Master was interesting. Never seen him before until this so don’t know much on him. His dad as White Dragon another DC deep cut hear. Wonder where that will go.

Vigilante has an interesting take in this. A more comedic take on him but fits well for the show.

The story itself interesting. Peacemaker hating himself and regretting choice but his upbringing making it hard for him to deal with it. A lot of similar ground amongst the team. And the project butterfly.

My theory with this is maybe it’s Mr. Mind continuing from Shazam’s post credits. As this is in the DCEU (at least it seems that way).

I like the sence of history that Gunn has been doing

I never want to hear “Who asked for this?” ever again.
Peacemaker and James Gunn proves creativity can bring quality to anything regardless of a characters popularity.

Great first impression for the HBO extension(s) of the DCEU. Ep1-3 were sooo dynamic and fun.

Was initially a bit worried if I wouldn’t care about the other characters besides Peacemaker and Vigilante but they’re all entertaining and interesting in their own ways. I think 2 of them are also original characters made for the show. Just goes to show how great Gunn is at setting up groups and making us care and/or interested in them.

Looking forward to more & will for sure watch the intro each time despite already re-watching it like 20 times now (it’s just that good!).

I love it so far. Watched em last night. Perfect vehicle for Cena. I liked how they intro’d episode 1 straight from The Suicide Squad. Cool transition. As a huge Cinderella fan, I had to appreciate the most discussion ever about that band since the 80’s, on MTV.

I’m having so much fun with this show! I was a little nervous with the changes to Vigilante, but you know what? It grew on me!

Can’t wait to see the rest of the season.

That’s an interesting one, haven’t heard that one yet. It’s possible, given some of where this show is rumored to connect.

The prevalent theory I’ve heard is the ship and the “Butterflies” are actually a precursor to The Reach, and this will lead into the Blue Beetle movie.

I’ve heard that one too. Would be interesting.

I was hoping for the female Judomaster but it wouldn’t have fit the script. Wrong side cuz she’s a hero & wrong context too. I just saw Judomaster in the info above the episode & for a second thought it might possibly be her.

really worried Leota is going to die, cause the last time (that i remember) waller’s secret daughter worked with the squad it ended with her death

I loooooove love love Vigilante! I need more of him haha he’s hilarious and I love his energy

So far so good, i really like it and if you would have told me that my least favorite trading card in the 1991 Impel DC Cosmic Cards Inaugural Edition would make this compelling a character and show and in 2021 be one of my favorite live action DC characters…my 8 year old self would have spit Faygo across the room.

But here we are, and while i don’t love James Gunn’s sense of humor, i just otherwise connect with his writing and how he creates characters. They are so rich and vulnerable that i can picture them making bad jokes.

Also, Gunn’s R rated super hero work actually feels like real people doing something, rather than some other companies. I honestly need super heroes who swear, drink a beer, enjoy eachother’s company and have sex.

Suicide Squad is better on every rewatch, and i’m hoping to say the same at the end of season 1, while i’m hopefully waiting for two. 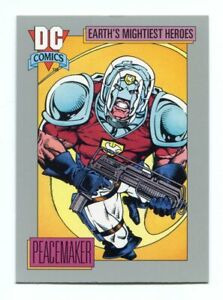 This show is hilarious. I was so so on it when I heard it was coming out as I have never really followed peacemaker. This show is not afraid of anything.
Fork ?

I think this kind of says it best: 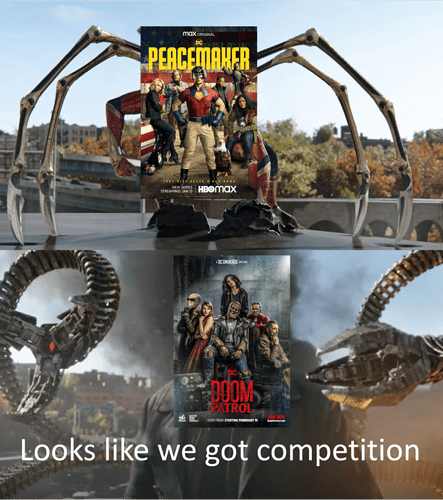 Loved all the character introspective we got. Tensions were tense and tears were shed (

)… I think even the most anti-Peacemaker person would feel some sadness watching his flashbacks during the dance sequence. Once again Cena’s performance is great !

Relieved Judo Master didn’t die. Absolutely LOVED that he came out the locker with a bag of chips

Adebayo really surprised me. Starting to see now what Waller sees in her. The way she manipulated Vigilante rather than in your face force like Waller would is a great skill. Suspicious on how much she feigns ignorance.

Assuming she knows what Butterflies really are…hmmm… Still, she seems genuinely good just more in the grey than she would like to admit.

As far as romance on the show just putting a guess out there that it’ll be an unrequited love, just the way Peacemaker looked back and walked away from Harcourt at the bar seems (to me) indicate his decision not to persuade her. Two sailing ships going opposite directions. Would also line up that people like them don’t always get a squeaky clean normal life that would include romance. Poignant.

I wanted Harcourt to give him a hug and she probably wanted to too.

The news report of the kidnapped gorilla has me wondering or at least hoping that it means Animal Man will be appearing in the show.

Can definitely see James Gunn including such a quirky character in Peacemaker!

That’s coming back for sure. It was also the headline on the newspaper the guard was reading when Vigilante got arrested.

Took a show that was a ton of fun and gave it a heart. Or maybe its kidney just moved up and became the heart. Whatever the case, this episode took this series and this season to the next level!

The reveals, the music, the fights, the deep cut references from the DC Universe and did I mention the reveals!?!

James Gunn is knocking it out of the park with this show! THIS is what DC needs more of. Between this and Doom Patrol they’ve proven you don’t need established characters that everyone is familiar with and loves. Tell a good story and it doesn’t matter who the main character is, it’ll work. This show is working. Oh, man is it working!

Vigilante sitting at the table, wanting everyone to say what they were grateful for in regards to a certain subject. I had my hand over my mouth to stop me from yelling “What are you doing?!”

Vigilante’s walk into the prison, so confident and unfazed by the taunting and threats he was receiving just inches away from him on both sides…fantastic.