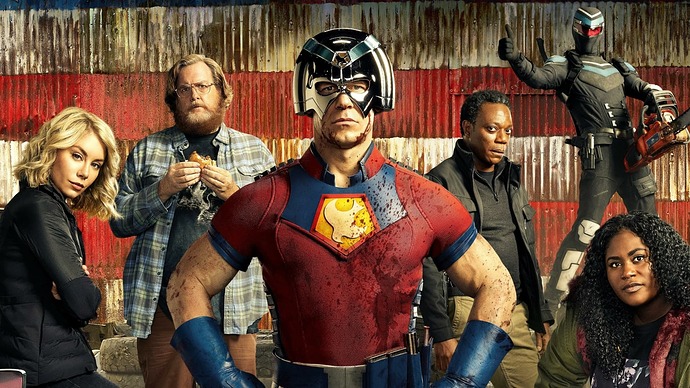 Well, that’s it folks! Season 1 of Peacemaker has come to a close. Blood was spilled, curse word counters worked overtime and we learned what on Earth a Butterfly Cow is. It’s been a truly interesting journey into the mind of James Gunn and it is far from over.

Yesterday, Season 2 was confirmed and you can take a peek at what’s coming over on DC Comics.

My main question is why have there not been official discussion posts for each episode before this?

That was an insane finale to the season – well done all around. So looking forward to seeing where they take these characters next season.

Great finale for a FANTASTIC show. Having his dad become a ghost that haunts him is reminiscent of the comics that Book Club read in January.

I liked the arc for all the characters, LOVED the cameos at the end and am intrigued to see where it all goes from here.

One beef was how useless Eagly was in this. I thought he should have been the one to deliver the helmet to the barn.

Pretty cool stuff here! Really happy that it didn’t go down the “cliffhanger ending to get another season” route. This is a great ending of the story, but also of course leaves open more stories.

Really liked the complicated moral philosophy of the conflict. And I think Peacemaker chose the right thing.

Because @NYJt3 already made a discussion thread for S1 that was getting a lot of attention. We didn’t want to pull the community between 2 places!

This is a great ending of the story, but also of course leaves open more stories.

And more stories are definitely coming with S2 officially announced!

I did see that, but threads like that were only created because there weren’t any official ones like there used to be. That’s been the case for most DC shows lately, but I do still miss when there used to be official posts for new episodes, just like this one

We stopped doing those due to limited engagement across the board. It was a solid chunk of time to create the threads with usually only 1 or 2 comments. With lots of other tasks, this one fell to the backburner for the time being.

Ah, I didn’t realize the engagement had been down on those. Guess I just assumed official DC Community posts would get more attention, but I should’ve considered that. And I of all people can sympathize w/ such a frustrating situation. Thanks for clarifying!

Pretty fantastic and unexpected. I agree with the comment that Robert Patrick would be a great “Bizarro Obi-wan” whose ghost can keep popping up and making Peacemaker nuts

I love how the ending showed that the Justice League isn’t perfect and they can’t always show up on time to save the day. Also, Barry playing along with the “Aquaman F*cking fish” joke was really fun to see.