Ok, so there might be a billion reasons for this being a bad idea. But it’s covid times, we are isolated and have nothing better to do, so lets play with the idea.

Saying that DC has a diversity issue is fair I think. Come October just about everything but white guys is gone.

I am not going to say that DC hasn’t tried. I am sure they have. But it’s been over 80 years. We have had the discussions of diversity in society time and time again and made loads of progress, but comics still party like it’s 1957 or something.

Once every other year or so the promises come: 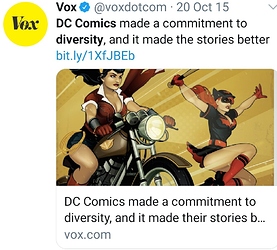 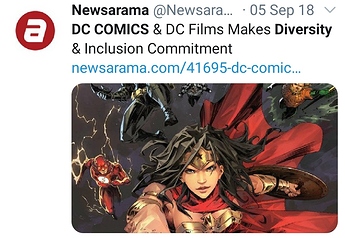 and then a few years pass and now we are here: 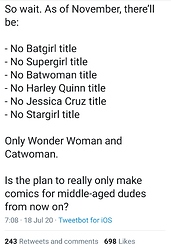 Now, this isn’t good PR, and it… well it’s just not good at all. This mirrors recurring discussions we have at the forum about the importance of inclusivity.

I am going to make a presumption here, and the reason for DC not fixing this in 80 years isn’t because of institutionalized misogony or racism, but a business decision. They are incapable of making money and being diverse at the same time.

Counterpoint - It has been a popular tweet lately that combining diversity with profit works well. 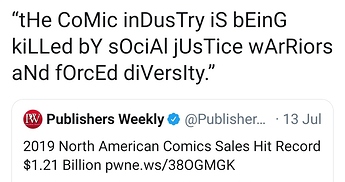 Above from a known DC writer. But if DC knows how to do diversity and make money. Why is the diversity so #$%$ bad? That leaves me with just institutionalized misogony and racism and I don’t want to go there so for the purpose of this discussion I will assume that they do struggle to combine these two.

Other counterpoint: The titles are disappearing because of 5g not happening and it messing with plans. Counter-counter-point: White male comics still make it to shelves fine and this was a problem even before it got even worse.

So now we are getting rumors of milestone comics coming back to alleviate this. This will definitely help with parts of the problem but not all.

What I am proposing is to take this outsourcing further. What if instead of having characters gathering dust, DC open source all characters for the purpose of comics except the handful they know how to turn into big profit? DC still retains the rights to merch and movies and animation.

Open sourcing has worked well in software and other businesses.

It could probably take a while for artists and writers to adapt to it. Maybe they never will. But what outcomes do we have? Maybe no one jumps on the bandwagon. Well, nothing lost then. Maybe someone writes a great story and makes money on kickstarter. It could give income and recognition to new talent. The character finds popularity that DC didn’t know how to mine and DC can also rake profits from merch and movies.

The whole world would have the ability to contribute to the use of DCs diverse characters. Maybe some of them could reach the big or small screen with time?

Am I crazy? Probably. Or maybe it’s a way to get characters off the dusty shelves, more artists and writers an easier window in and more diversity on the shelves? Right now they are gathering dust. They are not making money, but they are making bad PR.

Chime in: DC open sourcing for diversity. Madness? Impossible? A way to make it bigger and better. Worst idea ever?

I’d personally be happy to fund kickstarters using unused DC characters if a budding artist and writer want to do something with them.

DC doesn’t even approve of fan fiction on this forum, so I doubt they’d do this.

How does that work with the writers club? Is that a speakeasy club?

There is no formal writer’s club, from what I’m aware of. There is a fan art club, and even that’s restricted to some degree – can’t show off redesigns of characters and such.

Your pointing out one of the tactics DC uses. They give us diversity and then they take it away so that one day they can give it out again and make a big deal.

I don’t know, that seems to veer into conspiracy theory territory. I think the simple answer is that they continually try and a lot of the books just don’t sell well enough to keep going, for whatever reason.

One thing to consider is that right now we’re in the middle of a big, crisis-level event in Death Metal, and those books usually end up creating a relaunch of some sort. So yes, Batgirl is ending in October, but chances are we’ll get a new Batgirl #1 when the event is over in January, if not sooner.

White male comics still make it to shelves fine and this was a problem even before it got even worse.

I’m going to make a point right now. You know why things like Superman and Batman survive. They’re the two single most recognized heroes in the world. They are fan favorites. Wonder Woman is also a fan favorite. So is the Flash, GL (John, Jessica, and Simon included), and several others. It’s not because they are white men. That will never be the reason. They are there because they are tried and true heroes people look up to. Their comic sales are what keeps DC comics alive.
Nightwing, Batman, and Aquaman are some of my favorite books right now. Good story telling is the reason I’m so raptured by those comics. I didn’t find Wonder Woman that interesting. But JLO was one of my favorite Rebirth titles.

It’s not about diversity. It’s about personal and business interest. Covid hit every business hard. Comics that don’t sell well are taking a hit. Hawkman is my favorite hero. But they canceled his comic too. That’s not a race issue, that’s a business issue.

I’m reminded of how NBC justified canceling Star Trek based on the way that they determined TV ratings in the 1960s, but when they revised their method for doing so, it became clear that Star Trek had been doing quite well.

Hawkman is my favorite hero. But they canceled his comic too. That’s not a race issue, that’s a business issue.

I think the simple answer is that they continually try and a lot of the books just don’t sell well enough to keep going, for whatever reason.

This is why I’m suggesting open sourcing. I think that others might be able to turn a profit where DC can’t.

This was an issue before covid. It will be an issue after covid. I’m not saying that DC kept them because they are white men. I’m saying that the only thing left is undiverse because DC can’t turn enough profit on their diverse characters. Hence give them up to the public for mutual gain.

Like anything else it’s about adapting and getting with “the times” in which I think wholeheartedly DC does more diligently than the majority of companies in the comic industry being said it’s always going to be about what makes the most money/sense at the time vs. just what is the “hot topic” of the moment. Keep the movement going for more INCLUSION of female leads and other types THEY WILL EVENTUALLY catch on! … this industry has ALWAYS been about Fan Service! So enough want and ask for it … they’ll do it!!!

In addition to the COVID impacts, a lot of books may have been set to end in order to launch 5G. The Batgirl writer commented on that series ending and indicated that the book ending was planned in advance.

Writer Cecil Castellucci confirmed the news on Twitter, revealing that this ending has been planned. She wrote: “It’s been announced that 50 is the series finale of Batgirl. Wanted to say that end has been in the works for a long time! It was planned because there were other things upcoming that didn’t happen. Fiercely proud of bringing Babs to here! Meanwhile 47 out next wk!” 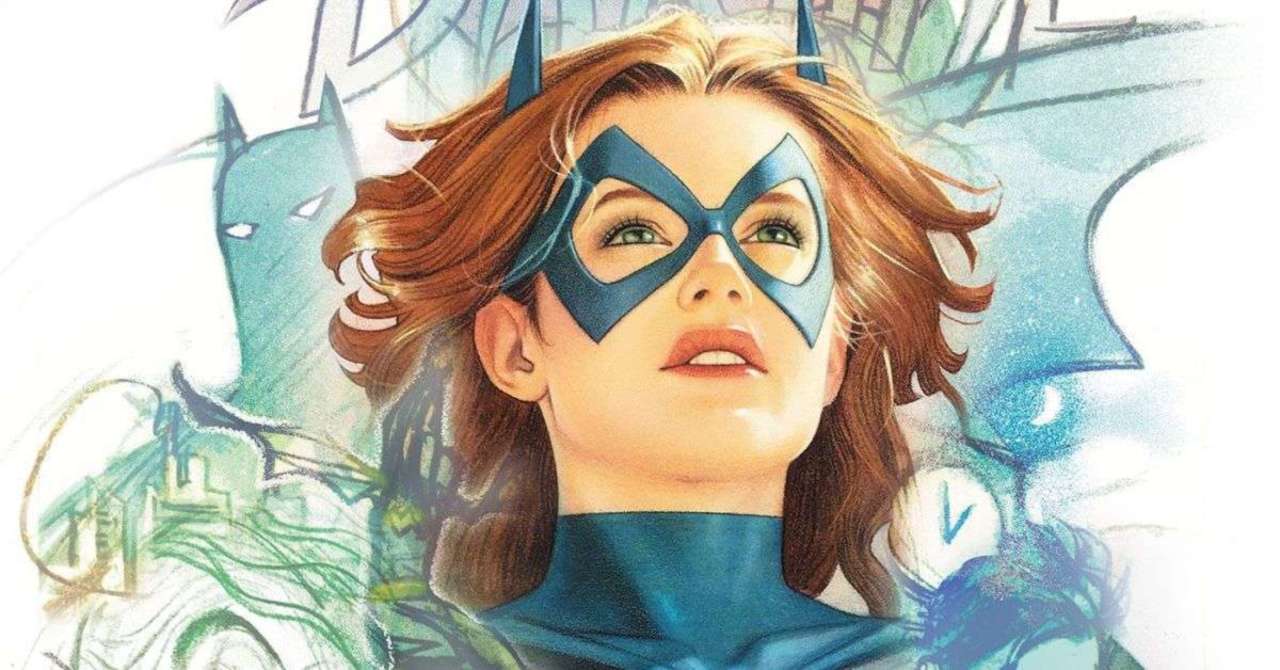 A staple of DC's Rebirth publishing line, the Batgirl comic series is set to officially conclude [...]

This doesn’t sound like a money issue (but who knows), and I don’t expect Babs to stay down for long. Even the solicitation sounds more like a pause or end of a chapter.

As for open source, I think it would be difficult to have continuity or consistency. I’d be very skeptical of something like that and unless DC would be set to make a lot more money with that formula, I really don’t see it happening. (Although, continuity can be a mess now even with supposed groups. How is a character knocked out in 2 very different situations in Joker War???)

I think DC could do something like this with obscure characters or as a new setting for new characters. For example, allow the use of Gotham, Metropolis, or Themyscira. The core character of the book could be a new character in a familiar setting with familiar guest stars. Basically, DC can allow others to play in their backyard with some familiar side characters (e.g. an audience with Queen Hippolyta or training with Phillipus). DC can potentially find the next new character to take off and introduce more fully into the mainstream, and new writers and artists can be discovered with a break out character to their credit. I’m kind of thinking of a situation like Naomi, but if she came from an open source vice DC related creators.