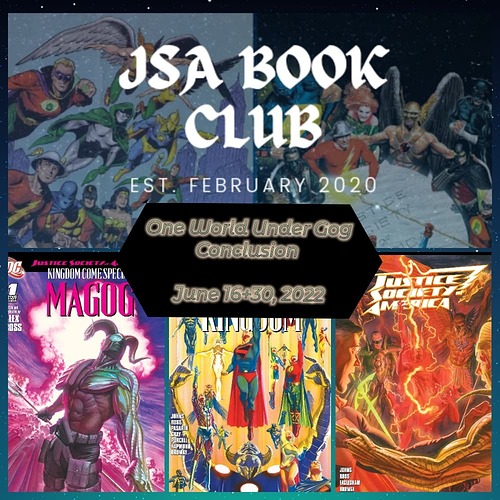 Hello folks and welcome to the @JSABookClub second June session. This session we will concluding the Thy Kingdom Come storyline. How will this end only Gog knows. Let’s get started! But first…

* JSA: Kingdom Come Special: Superman #1
(I apologize that this is only a summary but I haven’t been able to get the issue to load.)

And that’s it folks. Next month we will be taking a look at another story from the All Star Squadron series so be on the lookout for that.

JSA: Kingdom Come Special: Superman 1, I feel, is mostly good. Unlike the Kingdom, I feel like this issue does a fairly good job of respecting Kingdom Come, (my favorite comic ever written) while also telling it’s own story. The reason most likely being that it was written by Alex Ross, the reason for Kingdom Come’s existence.

However, even if most of the stuff was good, there is one detail that I am not a fan of, to say the least. Superman telling Lois that he will hurt the Joker and Lois having to tell him not to, was something that really bothered me.

One of my favorite aspects of Kingdom Come was the Magog and Superman rivalry. After Joker killed a ton of people from the Daily Planet, including Lois Lane, Superman still was planning to find Joker and have him go to prison, but instead, Magog found Joker, barely before Superman, and murdered him. To Superman’s dismay, the public saw what Magog did as the right thing to do, and thus he gave up on humanity, deciding to live inside the Fortress of Solitude.

In my opinion, the idea that Lois had to tell Clark to not be Magog, really detracts from such an incredible concept.

I Think That the J.S.A. Deserves an Animated Movie!
Which Includes the Original Flash and Green Lantern!
Hawk Man as Their Leader, of Course!

Good Too Know That at Least We Get Too See the J.S.A. On Star Girl!
Still, Wonder Woman and Her Lasso of Truth Should Be On Star Girl!
One of the Many Reasons Why I Like Star Girl is Because They Have the Justice Society of America, On It!

I forgot about that one. Is it worth watching?

Easy enough to explain. Clark was going through great trauma. This very often results in the victim declaring that he will kill somebody while never actually doing it.

Superman- I love this issue. Especially Cyclone’s art, and that she memorized the Bible.

The attack on the planet (Earth 1) is his great fear- not having a weakness. First it is fun, but then paranoia that he is an unstoppable and dangerous force. There is a reason after all normal Superman gives Kryptonite to Batman. At the end it is no longer fun but seeing himself as a planet menace.

Magog- I love it, all his cruelty, harshness, and decisive actions make perfect sense with his backstory, it is why I want him to keep getting used (I hope he appears in Stargirl).

Starman- Yes, it was interesting, but I prefer the summary given in Justice League vs. Fatal Five

The Kingdom- The Sandman piece is terrifying, and the perfect attack on what Damage is saying. This is shown as well with the Dr. Mid-Nite scene too. 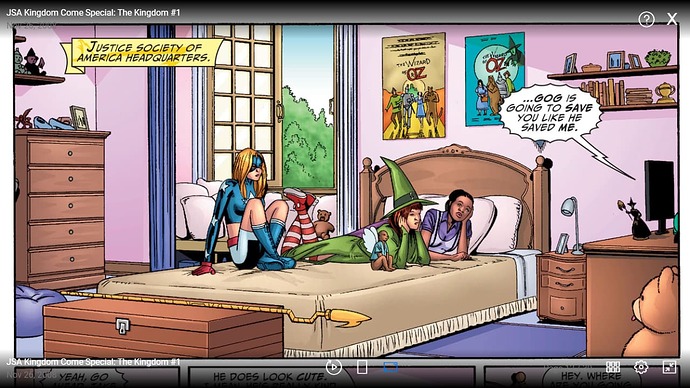 image1280×720 142 KB
I can tell this is Cyclone’s room. A nice detail is the positions show how Stargirl, unlike the other two, is actually about to do something. There are many nice touches with the art.

When Star shows up she appeals to his friendship with Liberty Belle and Hourman, bringing up he should have contacted them first.

I know I brought this up before, but I like the mirror images to explain that Damage got some details wrong. 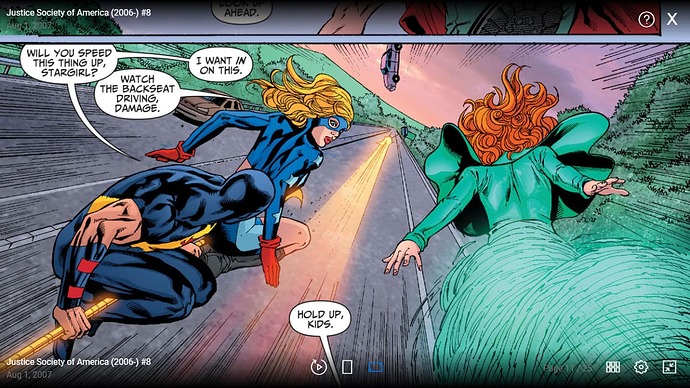 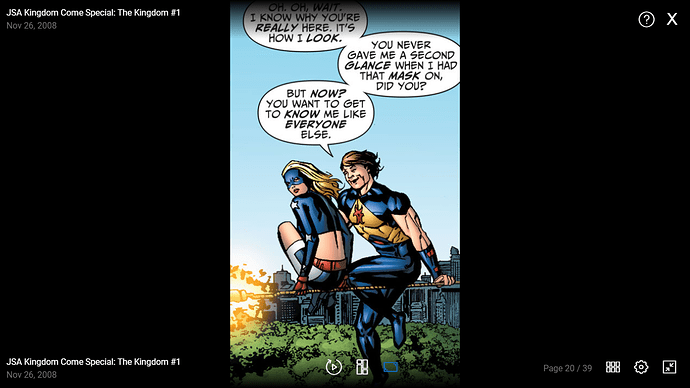 His flirting gone wrong it shows that Damage is furious that a girl is both not interested in him and literally looking down on him, that this big talker for once cannot even finish his statement. Nice foreshadowing how completely unhinged he has gotten. 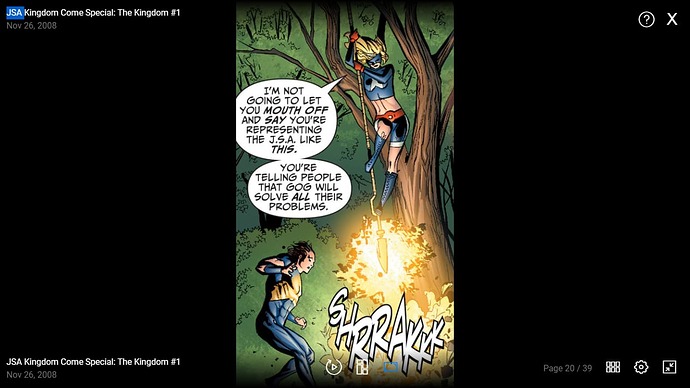 image1280×720 71.5 KB
I have spent some time studying this picture. Did she attack him and he backed off, or shoot well in front of him. I think he is walking forward, so she did not attack him like how he immediately blasts her.

After that Atom Smasher rescuing his future wife seems to me like a mirror of when he abandoned her in Princes of Darkness showing his change over around 50 issues.

At Al’s house “Vanity Smurf” is shown looking in the mirror in 4 out of 9 panels.

I noticed the Al vs. Damage argument is actually very similar to the one Star and Billy had in Princes of Darkness. Billy and Damage hold heroes to higher standards saying they should know about lost kids and also be super parents. Star and Al say the great heroes should be forgiven for inevitable mistakes and are not all knowing. I think it shows why they ended up getting married, they could forgive each other for their faults when they were each the team’s biggest troublemaker. The cases and points in the two debates is very similar; the only difference is how they handle the other person not exactly agreeing.

Anybody else think Stargirl was masterminding a giant plot for Atom Smasher this issue? She gets Damage to attack her when Al is around. This lets Al save her and see her as his damsel in distress. Then the JSA can hear about that and (According to her plan) see him fix Damage’s issues making a much easier case to put him back on the team.

Well I wrote way more about that issue than planned. I will do the other 2 soon.

21- It was not until last read I realized how close Stargirl and Citizen Steel got it. It feels very authentic.

Citizen Steel and Magog have great moments on refusing Gog. Meanwhile Damage actually tries to stay on Gog’s side. I really see why many fans rejoiced when he died.

22- I think I know why David stayed Magog. Instead of removing his gift he gave him great pain thinking it would make his precious herald switch back. Before he could take it away the entire team attacked him.

First time I noticed that Superman is quoting Lois when lifting Gog to space.

There is that part where Power Girl and Hawkman look at each other talking about it not being over? Was this when the plan was they would both form the All-Stars? It looks more like they are agreeing they need to change something. 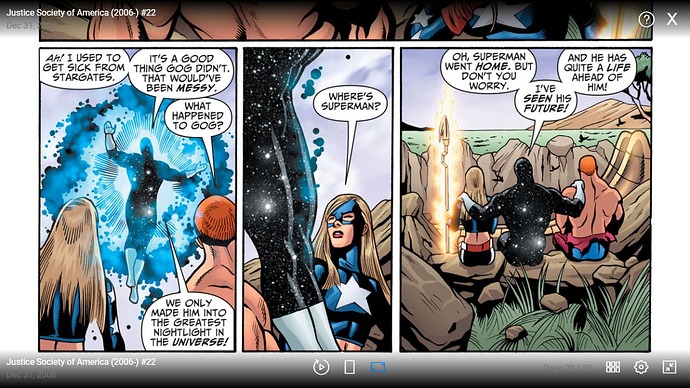 I really like that last image. NIce happy scene in a dark storyline.

Well I wrote way more about that issue than planned

Nothing at all wrong with that. I enjoy reading your responses.