Welcome back to One-Shots, a weekly book club where we read and discuss a single issue with little to no context needed!

This week we’ll be reading Justice Riders (1996-) #1, an Elseworlds tale set in the Wild West! You can find it in the DC Elseworlds series or here: DC Universe

The discussion will remain open until July 3, 2019.

Discussion Questions:
1.)This story reimagines many popular characters. Which reimagining is your favorite? Least favorite? Why?
2.)While some elements of this story are more grounded than in a typical Justice League story, there are still some fantastical elements. Do you believe that it would have benefited the story to be more grounded? Do you believe that the story would be better if it leaned more into the fantastical elements? Or do you believe it is the best it can be as is? Why?
3.)Give this story a rating on a scale of 1 to 10. 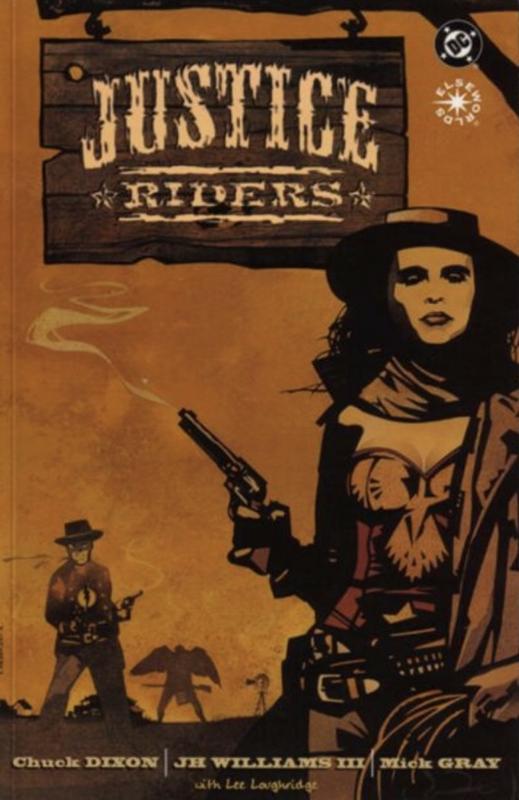 Sounds fun, definitely looking forward to giving this a read.

Guess I’ll mowsie on over here next, partners…

Why does this scene make me think, “Sheriff Applejack keeping the peace…” 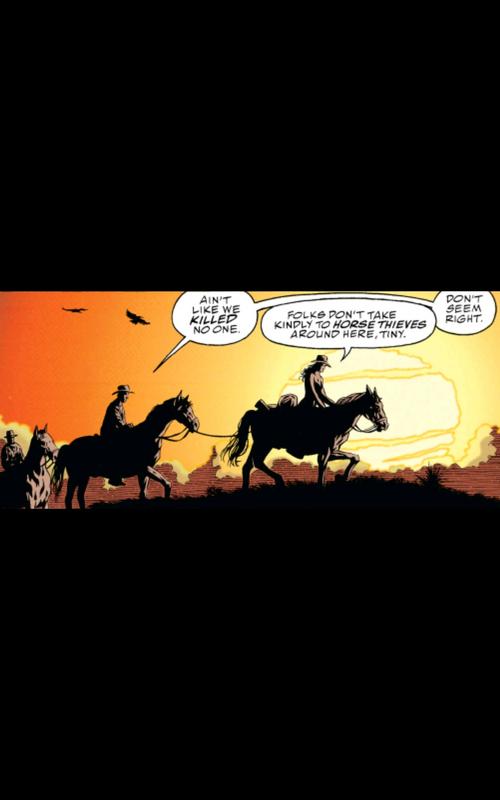 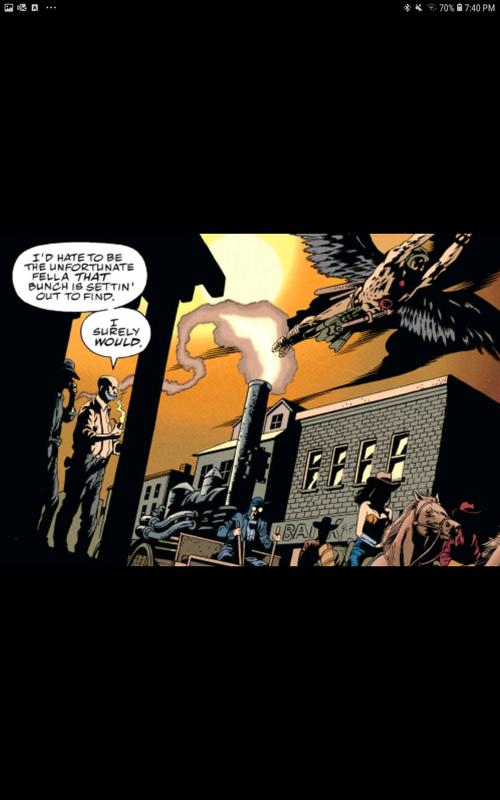 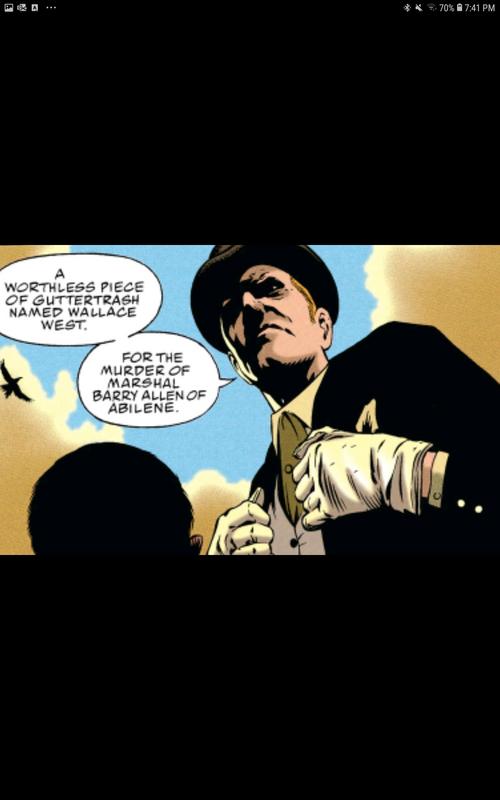 So get a reading posse together, saddle up and explore these 64 pages of wonder is my 9.2 out of 10 suggestion! 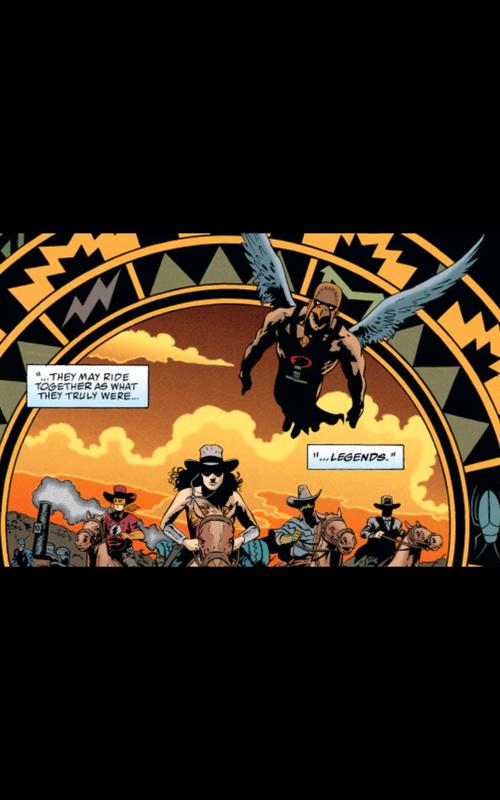 Heh, I read this a few days back and completely forgot to post my thoughts! It’s not super fresh, but here they are.

“This story reimagines many popular characters. Which reimagining is your favorite? Least favorite? Why?”

I guess my favorite is Wonder Woman as the plucky sheriff. She’s not THAT much different than her classic self, but I think that speaks to just how iconic the character is. The idea of Guy Gardner as a Pinkerton agent going after Wally West was also kinda cool. I can’t think of any that were downright bad, most were at worst just kinda there.

Ultimately I think the fantastical elements are the right choice. While it would have made things more different if they were more human, I think that would have also made it more…formulaic, I suppose? Like, after a while, why not just rename all the characters and just write a normal western story. Blending the two makes it feel both like a proper western and a proper superhero story.

Ultimately, I think I would give it a 6. One thing I was surprised by at first was the choice of the characters to follow. While it makes since thinking about who was in the League in the mid-late 90s when this came out, when I think of “Justice League members as cowboys,” I don’t think of the likes of Booster Gold, Blue Beetle and Guy Gardner. Maybe my inner Batman fanboy is making me biased, but I would have rather seen him in there and more of this take on Superman than those three.

But still, not a bad story, all things considered. If more was made, I certainly wouldn’t mind.

1.) This story reimagines many popular characters. Which reimagining is your favorite? Least favorite? Why?

Favorite: Sheriff Prince. I thought it was a great role for her. She was my favorite character. I’m not sure about my least favorite.

My heart kind of sunk when I saw Kid Flash using his powers. I was really hoping for a straight supernatural western, a la ‘00s Jonah Hex.

I’d give it a 10. Plus it’s only elsewhere story that was included as a world in Convergence. It’s one of the 1st cities to do battle.

YooHoo Mr Squiddy… another round of One-Shots please for everybody

I really miss those one shots, sniff.

like a country songs say, you never know what you had till you lose it…

Awesome_Squid do you plan on continuing this? if not you mind terribly if I steal the idea and continue this going weekly? A lot if us really enjoyed participating with you on this unique concept of bite-sized readings per week.

@Don-El I was trying to keep it a surprise for an announcement this Wednesday, but yes I’m planning on bringing One-Shots back. Something happened in my life that made it difficult to continue, and I’ve been waiting until I know I’ll be able to do it consistently to start it again. Luckily, that time seems to be in sight. You can expect it to start again next Wednesday (not this Wednesday, the one next week). Sorry about not answering your other comments; it’s been a lot of work trying to find the time to do this. The new and improved One-Shots will have new features like hints about what’s coming next week (for people who want to try to guess for bragging rights), quarterly posts where people have a chance to choose which of the 12 comics last covered was their favorite (tournament style), and possibly a discord. Next Wednesday is also when the next step in the DC “Cinematic” Universe over in the Fan Creations board will happen.

I’ve cleared my schedule and everything I’ve had planned is coming back bigger and (hopefully) better than ever.

I’m sorry to hear about the any difficulties you’ve been going through. Sounds like the worst is over and that’s fantastic.

Glad to hear you have a plan to move forward. Thanks again for considering doing it.