This week we’ll be reading Superman (1939-) #76, which features Batman and Superman’s first complete adventure together! You can find it here: DC Universe 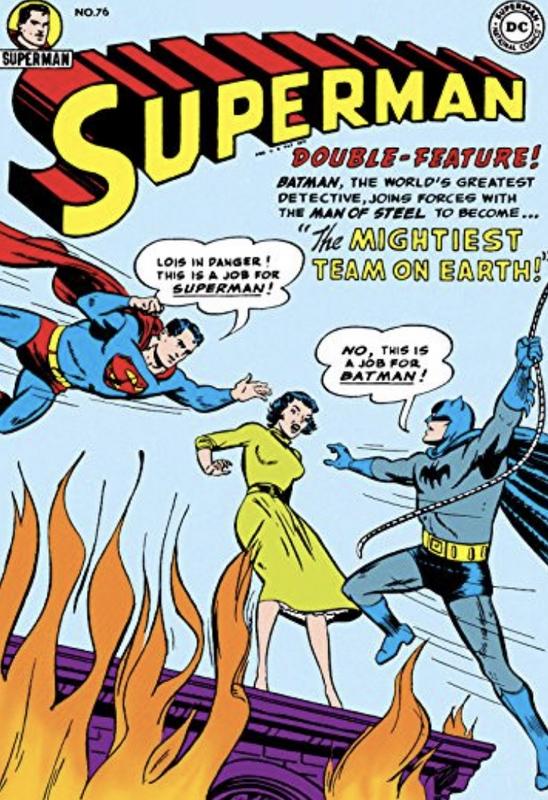 beat me to it again I was just about to make a very similar thread with this comic. I blame school work this time. You stop reading my mind now ya hear!

This was a fun story. It’s always good to go back and read some golden age stuff. Helps keep things in perspective.

I dont really think this particular story had any real influence on superhero team up books. DC had been doing JSA, and Marvel (then Timely) had been doing the All Winners Squad. We still would have gotten the Justice League and the Avengers regardless.

Overall, I’d give the story a 5/10. Enjoyable, but nothing I’ll ever feel the need to re-read.

Got room with regular book club a single issue this week so I’m in.

Hey, I was thinking of using this for the Wacky thread, foiled again!!!

@TheOriginalCaptainMarvel I agree that it probably didn’t influence team ups that much. However, I believe this was huge step towards a more connected universe. Batman, Superman, and other heroes had all appeared together in other stories before this, but that usually only happened in books dedicated to teams. This issue shows that Batman and his supporting cast can just show up in a regular old issue of Superman. It strengthens the idea of an interconnected world. And because of that, I feel like this issue is actually a much bigger landmark in DC’s history than people give it credit for.

@Don-El Come on, we both know that that thread has ascended to a level of wackiness that transcends this mere crossover cover.

I think Superman #76 is a great classic example of the golden age of comics.
We see Robin distracting a criminal so Bat’s can get the upper hand to apprehend him, then handing him off to good old Commissioner G. Gordon and Superman preforming civil services to Metropolis.
I found it quit interest that Bat’s is eager to take a vacation and “Forget about crime” very unlike his modern personae.
From there we get the typical shenanigans of golden age comics with Bruce and Clark being stuck in the same room for the duration of the voyage with them worried that there secret identity will be exposed. Soon enough there alter egos have to deter a Jewel thief and in doing so I believe it is one of the first instances where Lois is saved by another hero while Superman is on the scene. I can’t help but hear Adam West’s voice while reading this.
Though silly as some golden age comics can be, the application of scientific knowledge is excellent in its use to combat the situations at had. as with the use of inhaling the cloud’s water vapor to put out a fire.
The rest of the comic plays out like an old sitcom with our two hero’s having to keep up the charade of both identities to protect there secret identities specifically from Lois. It is funny to see Lois and Clarks relationship at that time. Though Sup’s clearly cares for her he is annoyed by her constant meddling in his affairs. Another great thing that this issue shows use is that we don’t often think of Sup’s as a detective but this comic demonstrates it quit well and that it was one of his original strengths.

While I understand that there had already been super hero team theme runs at this point in comics this was a pivotal point in that it showcased the two biggest names in the industry sense they appeared at the world fair and would not team up again for another two year in Worlds Finest Comics # 71. I would give this comic a score of 8 out of 10.
For the sake of Numbers it is interesting to note that while this issue #76 was the first team up of Superman and Batman, issue #76 also correlates to Superman 1986 run #76 which deals with the death of Superman along with Superman/Batman 2003 #76 which deals with the death of Batman.

@AquamonC137 I love how golden age it is! In my opinion, golden age Superman and Batman are really unique and lovable characters, and it’s great seeing them interact. Lois Lane, on the other hand… well, she’s a force of pure chaos.

By the way, does anyone else love how the roof to the museum in the beginning is just on the ground ready to be placed back on top? That’s not how roofs work, but I like it.

Yeah #76 is interesting for sure. Also oh Lois always muddling things up for Sup’s. Check out Superman 86 For Tomorrow great story and the best rendition of Lois ever. #212 pg. 17-18

shout out to [World of Superman] whoop whoop!

Yes I noticed that too. SO dependent of Superman! LOL!

1.) Overall, do you think this was a good team up story?
This story was hilarious. The tension leading up to them discovering each other’s identities was fun.

2.) What effect (if any) did this story have on later Superman and Batman team ups?

I was surprised to see Batman being cool about flying with Supes. In other team-ups I’ve seen, Bats is pretty grumpy when Superman carries him.

For years I have always believed this book to be the true, first Silver Age comic. Prior to this story Supes and Bats only worked together in two issues of All-Star Comics (#'s 7 and 36). This monumental team-up of the company’s two biggest stars was written and drawn by Edmond Hamilton and Curt Swan who, under the aegis of Mort Weisinger in the '50s and '60s, would lay down the foundation for Silver Age Superman. Just a thought.

The was part of the first comics I ever owned and yest the story is fantastic. I believe many Supes/Bats team ups have been influenced by this in all comics based mass media. Look at the DCAU’s “Worlds Finest” movie. Even though thats a much more serious story, #76 still has its fingerprints all over it.