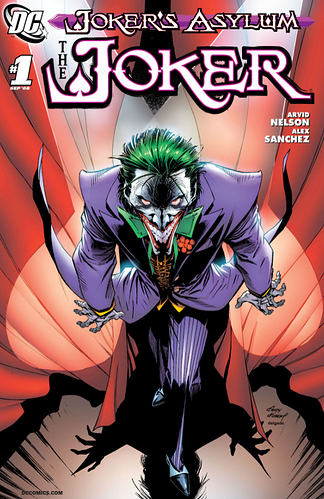 Looking forward to reading this as soon as I can

Yes! I fully expected some carnage served up with our Joker-flavored mayhem, but you have to give it to the guy…he does like to keep it random.

Well, part of the proceedings were to show the evil motivations of the tv show makers, but I don’t think he really, truly cards about all that…he just wants to sow some chaos and have a bit of fun and he accomplished his mission here.

My favorite Joker take is where he is just an engine of chaos, a representation of someone who has lost all inhibition and doesn’t care about anything…the exact opposite of Batman. So, anything goes when out comes to the Joker, which means you don’t need to worry if any one specific depiction ever matching the next.I

But, for a short answer: yes, this one matches up.

That’s tough…nothing is ever perfect, but I really enjoyed this as a quick read (thanks!). Let’s go…um…8!

oh, just found this! will bookmark.

The Joker’s actions also surprised me. And I agree that this story fits with depictions of him. Especially since the Joker is often depicted as believing everyone has the potential to be as evil as him.

Okay, so now for the actual questions:

For the most part, it didn’t seem all that surprising, or at least as far as Joker goes. There’s always kind of a 50/50 chance that Joker’s gonna kill someone, so it’s not all that surprising that everyone survived. The fact that he actually had a message to it, though, was kind of surprising. It’s basically the most heroic I’ve ever seen the Joker, since he was actually exposing problems with society and people in high positions.

In a sense, it fits. For one, he’s causing chaos and messing up people’s lives, which let’s face it, is really his main goal in life. Actually having a message was a little weird, but he’s done it before (like in the Dark Knight and Killing Joke). This is the first time I’ve seen it being something that could actually turn out positively though.

This was a really fun read that I don’t think I would have found on my own. It’s not perfect (I wasn’t a huge fan of the art) but it was so creative that I think I have to give it a strong 8.

The Joker is chaotic, so violence is never 100% guaranteed. However, the lack of violence in this issue still surprised me since the whole live tv game show theme felt like fairly typical set up for a violent Joker story.

I do agree that seeing the Joker with a message was a bit weird. However, I think it fits since I don’t think it’s a positive message. It lines up with how his world view is commonly depicted. After all, he often believes that everyone has the potential to be as crazy and evil as him. So him revealing the producer’s evil to prove a point didn’t feel too unnatural to me.

Yes I was surprised but I guess with Joker being an agent of chaos I probably should not have been.

I think he was just trying to get a good laugh and pull a good prank. The fact that his actions exposed the evil motivations of TV show makers was incidental. All in all he just wanted to have a good time, as he always does regardless of what that “good time” involves, and he did. This seems to be constant in his characterization over all even with as chaotic his characterization is.

I’d give it a 8.5. I liked the story itself and was glad to see something different with regard to Joker’s usual stories but the art was not my cuppa at all.

Yes very much. I was expecting at least something to happen along the lines of at least knocking someone out with his laughing gas but as others have said you never know what you will get with the Joker.

I think the Joker’s motivations were exactly what he said they were to question who the real crazy people are the viewers, the producers, the executives or Joker himself. I would say it does and doesn’t fit with most typical influences of how the Joker is depicted in comics. It does because he mostly wants to cause as much chaos as possible which he does but at the same time he only frightens the people of Gotham. He seems to have a motivation at least in this issue that we just don’t get to see.

This story was very interesting and am glad you suggested it. I would give this story an 8.

Ok, this one surprised me. The Joker I grew up with of the mid 60s - early 70s was more in this theme actually. Nice surprise.

The writing was didactic; the author was far more interested in making some societal points than he was with an actual plot or character study etc.

An interesting, and nicely short read! Great to have 1 shots back!!

Okay, so the art didn’t do it for me, and any modern Joker-centric comic immediately makes me wary of oncoming edgelordiness, but I was pleasantly surprised. It started off looking like yet another knockoff of the David Endocrine scene from TDKR, and then this happened:

And from there, it was a refreshing case of Joker having a “Silver Age” day without bothering to inform his victims beforehand.

I wish Joker would have a “Silver Age Day” every once in awhile just to change things up a bit.

The first one with the card did, but after that I kinda got the feeling of where this was going to go, especially with the producer – appropriately named Dick – going off as he was.

He kind of spells it out himself – people look at him as a monster, but seemingly good men will sell their souls for meaningless ratings and the masses are willing to casually consume the gore and carnage he’s known for, so how are they any different?

Or, in meme form:

It makes sense for Joker. The difference, I think, is that usually he’s displaying this sort of idea to Batman, not just randos off the street.

I think I’ll give this a solid 7.5. This kind of story has been told many times before, but this was still well executed. I was a little turned off by the art at first, but as the story went on I feel it’s suitably and purposefully ugly for this ugly story.

Overall, I really like the idea of this Joker’s Asylum series. So many of Batman’s rogues work for these short, one-off stories and I think it’s one of the many reasons why they’re the best rogues gallery in comics.