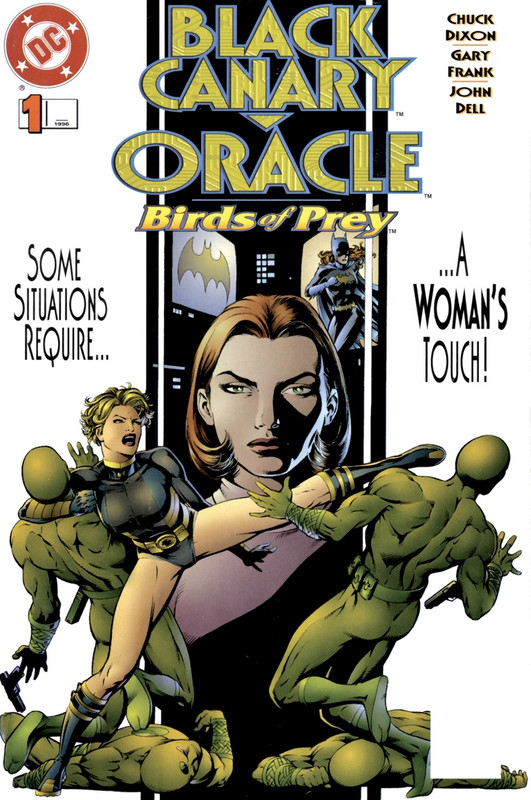 Welcome to One-Shots Book Club, a club where we read and discuss a single issue, with little to no context needed! This week, in celebration of the newly released Birds of Prey film, we’ll be taking a look at the first Birds of Prey comic: Black Canary/Oracle: Birds of Prey #1. You can find it here.

Discussion questions:
1.)Give your general thoughts on the issue.
2.)How is the first appearance of the Birds of Prey different from the team you’re familiar with?
3.)Give the issues a rating out of ten.

Extra credit:
If you’ve seen it, what were your thoughts on the film? (Please make sure to mark spoilers.)

Chuck Dixon AND Gary Frank??? Am I dreaming???

I reread this like a week ago, so I’ll just dive right in.

Oh no. This has the Oracle: The Cure tag. I swear I clicked on just “Oracle”. I must have missed.

I agree that the series didn’t really find its footing until the ongoing series. Birds of Prey really focuses on the dynamic relationships between the characters, which just isn’t present in the one-shot. However, there are still character interactions, and those are fun. I’d probably give it a 7/10 too.

If you’ve seen it, what were your thoughts on the film? (Please make sure to mark spoilers.)

I have a couple other books to go through before getting to this, but I’ll knock out this one real quick.

Overall I really liked it. It takes a few different approaches to characters like Black Canary and Huntress, but overall feels true to the spirit of them (except Cass, that was just super unfortunate). The main characters are all flawed, and yet have their charms. It’s not super filled with jokes, but most of them land, but the drama is what stands out, as well as the awesome action.

It’s a pretty good flick, and I hope we get to see more of these ladies on screen in the future.

Someone in editorial needs to talk to the colorists of this issue. They’re apparently unfamiliar with Lucius Fox.

Otherwise, it’s pretty good. Gary Frank knows how to draw cheesecake while still keeping the characters looking human, unlike so many 1990s artists. Not even he can make Canary’s new costume look good, though.

Finally got around to reading this issue. I enjoyed it, and it didn’t feel too long for an extra sized issue. It was both topical, heart breaking, and action packed. It doesn’t feel like they are the Birds of Prey just yet, it still felt more like a Black Canary solo to me. I’d probably give this story a 7/10, passing but it didn’t blow me away. Also really enjoyed the new film, won’t give any spoilers though.

I have not seen the Birds of Prey movie yet but am determined to hopefully see it this weekend. Thanks for a the enjoyable read and can’t wait to see what one-shot will be next.

I wish they would of developed more of Lynx

She’s actually a recurring villain from the Tim Drake Robin series, also by Chuck Dixon. Her first appearance was back in Robin (1991-) and she pops up several times in the '93 series and Dixon’s Detective Comics run.

Give your general thoughts on the issue.

I liked it well enough – the plot is kind of simple enough and doesn’t offer that much in terms of interest. What really makes the book sing is the initial interactions between Black Canary and Oracle, and the stellar art by Gary Frank.

How is the first appearance of the Birds of Prey different from the team you’re familiar with?

Well, most of my reading of BOP has been post-Gail Simone, so even just the idea of it being a two-person team is a littl odd. Second, this is very much early days for the two, the period where Dinah doesn’t even know who Oracle is. Like @BatJamags said, to me what makes BOP great is that close, friend/family dynamic that Dinah, Barbara, and eventually Helena have for each other.

Give the issues a rating out of ten.

I’ll give it a 7 – it’s a solid start to what will be a great team, with some good characterization and amazing art.

Thanks again @Awesome_Squid for setting one of these up again, my my my it was a tasty One Shot this time around! Not too rich, not too slim, just perfect for a leisurely read section by section during the week!

General thoughts: The “Mission Impossible” “Charlie’s Angels” concept of an all-knowing super rich benefactor sending skilled field agents on specialized missions isn’t exactly revolutionary by this time in the mid-90s, but the twist of having the brains behind the mission being a disabled former superhero does work well even in this trimmed down version of Birds of Prey to come.

How is this different from the team I’m used to: well, first up, both Commissioner Gordon and Babs are much older looking here that they are in the 1999 Birds of Prey. Seeing Babs as mid 40s with a touch of grey in her hair felt more like I was seeing an Earth 2 version of her.

It frankly was kind of a tear jerker to see her crippled again, valiantly making the best of things by keeping in shape where and how she can.

Black Canary here was a bit of a puzzle as well. Seeing her with no obvious Justice League connection at this point (I seem to recall Grant M didn’t have her in his “gods” version of JLA) and no Ollie to be seen frankly left her as a blank slate mercenary. And having her dress in a one piece bathing suit in regular society was super odd.

The artwork which I assume is early Gary Frank sure resembles the artwork in Marvel’s Master of Kung Fu by Paul Gulacy. Both Frank and Gulacy tend to make their characters look like they are under duress with the sweaty facial expressions and stances, in my opinion…aka everything is super dramatic and intense. 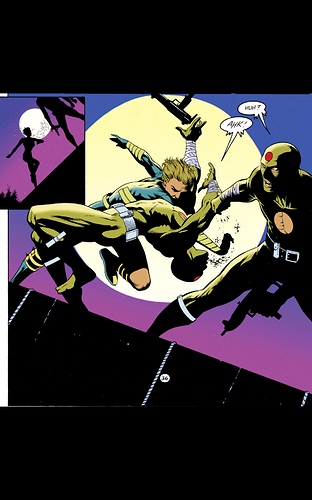 Gulacy art (soon to be a major motion picture, lol): 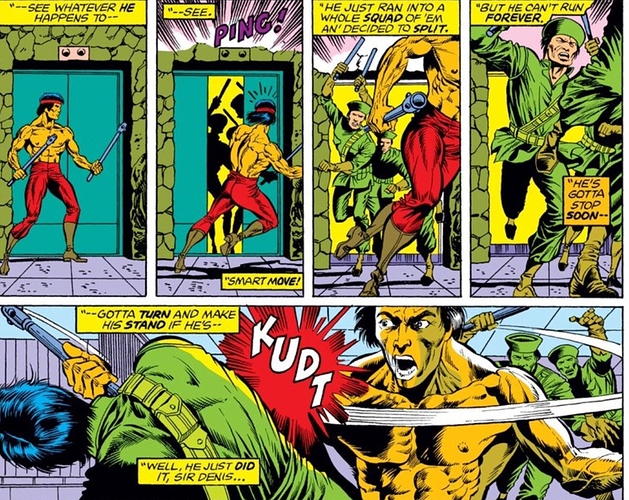 Hey hey
What do you say

Have you had
Your one shot
To- dayyyyyy?

No great thoughts here just wanted to say thanks. This wasn’t a comic I would have picked to read on my own. However I read it and liked it quite a bit and saw the real possibilities if the characters were allowed to develop. I’ve started reading the series. Thank you for expanding my horizions beyond my normal choices which are mostly silver age comics.

That’s awesome to hear! You’re definitely in for a treat, especially once you get into the Gail Simone run.

I’ve always liked this original one shot. I’m more into the Gail Simone version of the team, so I miss Huntress being part of the dynamic, but this is a really solid story. I like the spy vibe and Gary Frank is, of course, golden. I would give this an 8 out of 10.

I really, really enjoyed the movie, it was a lot of fun. But I judge it purely on its own merits, it’s not really reflective of the BOP comics.