[One-Shot Book Club] Superman Annual #11: For the Man Who Has Everything

Welcome to One-Shots, a weekly (?) book club where we read and discuss a single issue with little to no context needed!

This week we’ll be reading Superman Annual (1960) #11. You can find it here. We’re also going to try something a little bit different by watching the on screen adaption of the story from Justice League Unlimited. You can find that here. 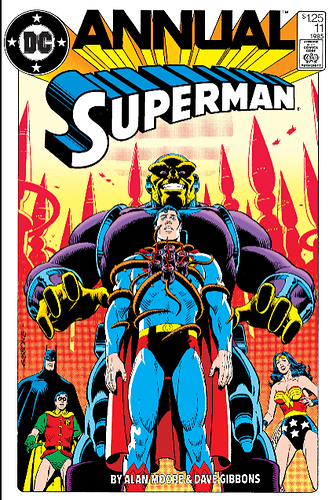 Love this one! Re read it over Christmas with the Superman: A Celebration of 80 Years, that DCU gave me along with a bunch of other great stuff (that was the winner though). I love that this will be open for a month. Off the top of my head for comparisons between comic and eps. I’m pretty sure that in the eps they didn’t play to heavy into Jor-El being a fanatic bitter about his false predictions. Lets see…I like Jason being there * looks around to make sure a certain someone isn’t around* But I think his absents in the eps doesn’t pull from the story. I always get a chuckle when reading his comment about WW being cold in those first few panels. It would have been funny to see that in the eps along with him running around with the big gloves. (I’ve pulled my copy out now) I really love both and think that the eps executed the little changes really well. I might even lean on the side of the eps doing better with the dream sequence than the Comic as far as capturing the emotional parts especially when he has to say goodbye to his son. If I were to change anything it would be that the eps would have WW plant that kiss on Sup’s! Oh Moore, even with that dialogue teasing WW/SM fans.

First time playing in the One-Shot Club! Needed just the right thing to read last night and saw this post and thought to myself “That is exactly what I need to read.” So, before I watch the episode. This book deserves every ounce of praise it gets. It is fantastic. It shows that under the right creative team, even relatively old school versions of Superman, Batman and Wonder Woman can be used to tell deep, emotionally complex and interesting stories.
While before, I likely focused on Superman’s personal dream and Batman, Wonder Woman and Robin’s efforts to free him while fighting off Mongul. This time is was Jor-El’s story that really drew me in. An accomplished, brilliant man suffered a very public setback. He could rise above it and return in even greater glory, he could turn his sights to a new direction or goal, or he can turn into a bitter frustrated wreck willing to push whatever crap ideology makes him feel better by making others look lesser. 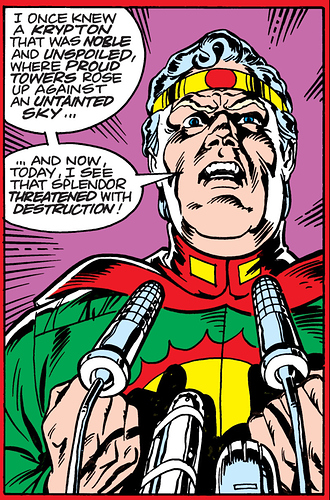 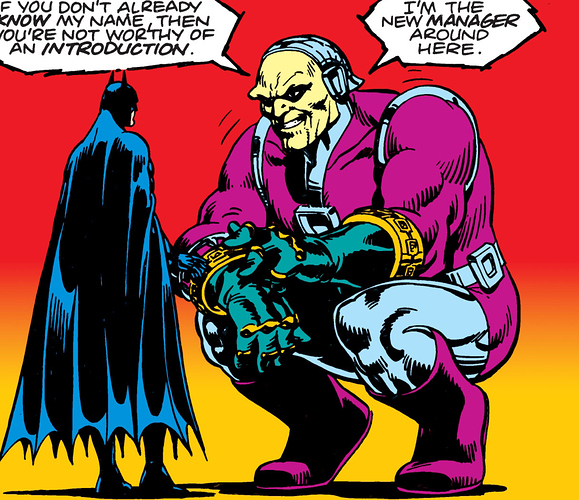 Mongul when he knows he beat himself. 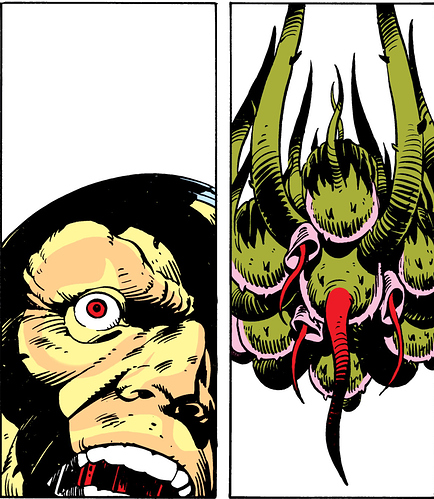 As for what I’d dream. I think a lot stays the same, but with way more money and free time, and no bald spot.

I like Jason being there * looks around to make sure a certain someone isn’t around* But I think his absents in the eps doesn’t pull from the story.

Watched the episode. What’s interesting is that the action inside the Fortress follows the book as closely as it can considering the dropped the Boy Wonder. This goes right down to lines from the characters. But, the story in Clark’s head is entirely different. Instead of a dystopian Krypton with the El family split, riots in the streets, and Jor-El doing his fascist groove thing (an actual song); we get what Clark would really want. This version has an amalgamation of what he loves about Earth (Lois, farmland of Kansas, his dog) with what he dreams a perfect Krypton would be. And, while I ranted about Jor-El choosing a dark path following his failed predictions of doom in the Annual; here he does rise above it and recover his standing. I think it must be said, the animated version is far closer to what Superman would dream of, the Annual is far closer to Moore’s political message.

I remember reading a quote from an Alan Moore interview once. I can’t remember where I saw it or exactly how he said it, but it went something like: “The Cold War was like the world holding a gun to its head. What we’re going through now is like living with the consequences of not pulling the trigger.” That’s how I remember it, anyway. I’m going to start with that quote as context for everything I’m about to write.

I think those changes blew past a big part of the story: What do you get for the man who has everything? A normal life because it’s the only thing he doesn’t and can’t have.

The original story in Superman #11 was written Pre- Crisis on Infinite Earths. Pre-Crisis, it was well established that Superman could not have a normal life. 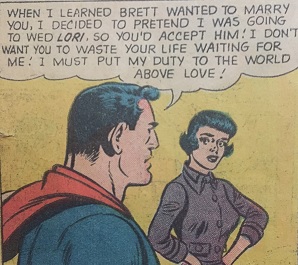 Basically, because of his powers, Superman had a duty to be Superman. That duty made a normal life impossible for him because of his enemies or because it could possibly cause him to compromise his mission. He couldn’t allow anything like a family become more important than his never-ending battle.

Except… maybe he really wanted a normal life.

So how can the Black Mercy give that to him, Mongul? 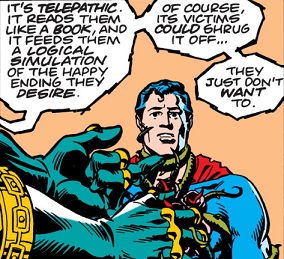 “-It feeds them a logical simulation of the happy ending they desire.” So, the Black Mercy does give you your heart’s desire, but… the fantasy still needs to be logical.

But, I really want to focus on the POWERLESS aspect because I think that’s critical. In his comic book fantasy, Kal El is powerless. He looks exhausted in the first few panels. He also comes off as really meek, timid. He stutters- hesitates when he speaks. He’s powerless and he knows it. However, he accepts it. He has his family, he has his life, and that’s good enough. He’s willing to be powerless on a rapidly changing Krypton so long as he has his hearts desire.

And why is Krypton rapidly changing and bleak? The consequences of not pulling the trigger (i.e. not exploding).

Jor El… not so much. He cannot handle the fact that he is powerless in a changing world, so he reacts in a way that is very similar to another Alan Moore character: 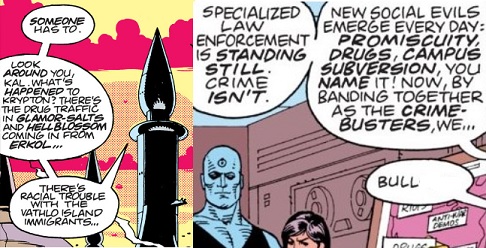 Jor El’s rant reminded me a lot of Captain Metropolis’ list of social ills from Watchmen. Both Jor and the good Captain feel powerless to stop the world changing around them and possibly leaving them behind, so they both retreat to:

They both hold on to an older view of the world that comforts them and they try to force these old ideas on the world so they can feel relevant and powerful.

This is to contrast how Kal El accepts the fact that he is powerless, but is still content with what he has. This reinforces the fact that he would need to give up being relevant and powerful to truly have a normal life.

The Justice League Unlimited version misses a lot of this depth. I mean, Kal El is powerless in it, but otherwise he pretty much still acts like Superman. Also, you don’t have the counter-point with Jor El. I think the JLU adaptation pretty much got the premise, but missed the subtler implications that make the comic kind of beautiful.

But… who knows… Alan is Alan.

Ah, no, I got it! I’d get him a device that would split him into two Supermen so he can finally do all those things he never got around to doing… create that antidote to Kryptonite, restore Kandor to its actual size, marry Lois AND Lana…

The original story in Superman #11 was written Pre- Crisis on Infinite Earths. Pre-Crisis, it was well established that Superman could not have a normal life.

And Moore has said the following about the post-Crisis Superman:

Even if I was actually writing for DC Comics again (and I often read Superman), I haven’t got any interest in Superman now. I’d gotten interested in the character when I wrote it, but it wouldn’t work for me now—the characters are different, the whole world is different. . . . Those were ones I wanted to write, but since then, most characters have changed so much that they no longer feel to me like the characters I knew. So, I wouldn’t have that kind of nostalgic interest in those sort of characters anymore.

It’s fairly obvious that Moore is riffing off Action Comics #241 in this story. In that classic tale, Batman realizes that he doesn’t know what to get Superman for the anniversary of his arrival on Earth, so he decides to give the Man of Steel a perplexing mystery to solve in the Fortress of Solitude. Moore alludes to Batman’s gifting dilemma from that story in the title for his own tale, extending it to Wonder Woman as well.

Moore’s nostalgia for the Silver Age is an essential counterpoint to his own indulgences in deconstruction. I’ve noted before that one of the most important panels of The Killing Joke is the one with the photo of the early 1960s Bat Family. Moore laments that loss of innocence even as the Joker card FNAPs onto the table, implicitly declaring, “This isn’t the way it’s supposed to be!”

I think that’s why I’ve always liked Moore. I love the Silver Age and I love deconstruction.