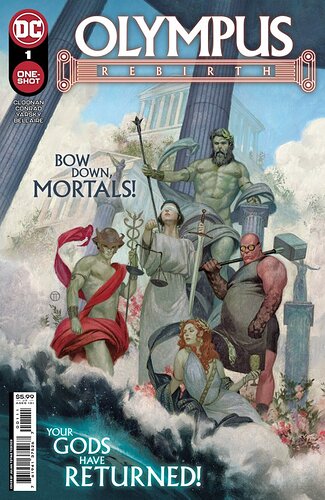 After years of bitter and violent conflict, the Greek pantheon of gods stands united to welcome their latest goddess…Hippolyta of Themyscira! Due to her heroic efforts in the mortal realm, the former queen has earned her rightful place among the gods and plans to use her newfound powers to take care of her Amazon sisters from beyond. Little does she know, some of the gods are wary of the new future Hippolyta brings and will do just about anything to stop it! 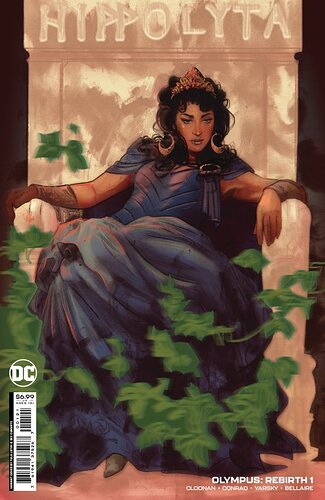 and brunette as well.

and brunette as well.

That’s beautiful. I can see it as a poster.

This was a wonderful payoff from Trial of the Amazons. I loved seeing Hippolyta learn to navigate the realm of the gods and take charge of her situation. It’s great seeing her put Zeus in his place and go toe-to-toe with Hera. Cool that they updated the look of the goddesses to match how they appear in the Historia series. I also love the little glimpses we see of the gods’ personalities. My favorite is Gaea, ignoring everyone else’s nonsense and reading A Wrinkle in Time. 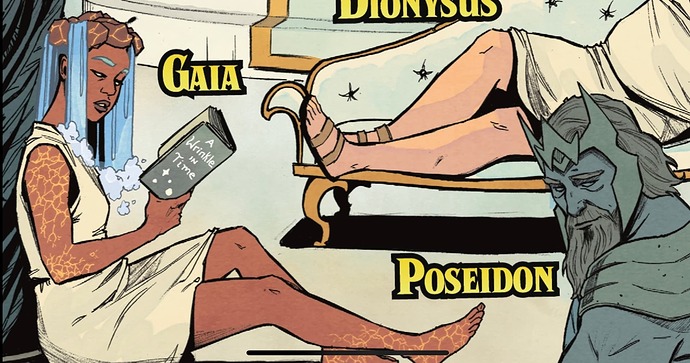 The most poignant moment for me, though, was the scene with Diana and friends having a night out where she leaves the table to cry in the bathroom. It was so real and so heartrending. Please, writers, have I not seen my girl suffer enough? A mother/daughter reunion is overdue and it better be coming in the next WW issue.

All in all, a great book! I can’t wait to see how it ties into the main Wonder Woman series.

It was great getting to see Hippolyta get the recognition she deserves as part of the Greek pantheon.

This issue also gave a bit more context to what Hera has been up to with her schemes in the Wonder Girl and Wonder Woman books respectively. I’m excited to see how this plot thread progresses.

One thing stood out to me, Janus becoming a statue because people have forgotten them. This reminds me of Neil Gaiman’s now classic, American Gods. To not get too into the book, the question of what happens to gods when no one believes in them is raised. Very cool to see an answer to that question in comic form.

Another thing, this is definitely within the larger continuity of the Wonder Woman universe. I can’t help but notice the Wonder Woman Historia: The Amazons is being used a blueprint for how the gods are worshipped and even some character designs. Considering that is a Black Label book and there are other things that don’t exactly sync up with the greater continuity, I will take it as a cool coincidence.

My last thought, this is a departure from the way some of the gods looked in the New 52 Wonder Woman comics. I was a fan of those designs, but I can’t help but wonder if this also serves as a tribute to George Perez, who explored the mythological side of Wonder Woman at great lengths, as the character designs are closer to his work than what we would see later on.

One more thing, is the war that is coming tied into Dark Crisis, or is this a separate Wonder Woman storyline?

I really enjoyed this for a number of reasons, but on behalf on my innermost WW Nerd For anyone who couldn’t join us for

“Adult me” understood the narrative choice, and appreciated it; However, inside me still lives a little girl who was very much like this a few months ago w/ the Hippolyta situation

(until I finished the story that is)

Needless to say, I’m very happy to see Hippolyta, being mighty as ever, and I’m always down to spend some time w/ my favorite dysfunctional DC family. Hera being…Hera. Loved Hecate’s design here, too, and poor Diana.

I felt that restroom scene.

New 52 Wonder Woman comics. I was a fan of those designs

I enjoyed them too. I know New 52 doesn’t always get a lot of respect, but there were things I liked about it—the Pantheon was one of those things.

There were definitely things that I didn’t like as much about that series but even those things I was sort of able to understand where they were coming from. While it doesn’t make things right, I did try to understand some of those changes.

I liked New 52 Wonder Woman. The character designs for the Greek gods were a big part of that. It was like they got a Sandman makeover. Glad some of them stuck around!

I know New 52 doesn’t always get a lot of respect, but there were things I liked about it—the Pantheon was one of those things.

I respect it! I just personally did not enjoy reading it.

But the way the mythological elements were handled was cool.

There were definitely things that I didn’t like as much about that series but even those things I was sort of able to understand where they were coming from. While it doesn’t make things right, I did try to understand some of those changes.

Same. Definitely things I didn’t like, but I can see what they were going for at least, and I’ll pretty much always support people who want to try something new. Even if it just serves as inspiration for something great down the line, that can go in the pro category, imo.

Speaking of “versions” of characters (Hippolyta) that have entertained me greatly:

I respect it! I just personally did not enjoy reading it.

I know we’ve talked about this quite a bit, so there’s no need to explain.

Speaking of “versions” of characters (Hippolyta)

I am finally reading the rebirth Era of WW!!! When she was finally shown I just figured she was blonde to match the movie…