The official release date for Netflix’s The Sandman has finally been announced!

Gracing TV screens around the world on August 5, the beloved series written by legendary writer Neil Gaiman, The Sandman is a dark fantasy story wrapped in rich detail and immersive story telling. For those who are unfamiliar, the official Netflix Release Date Announcement Trailer reads:

There is another world that waits for all of us when we close our eyes and sleep — a place called the Dreaming, where The Sandman, Master of Dreams (Tom Sturridge), gives shape to all of our deepest fears and fantasies. But when Dream is unexpectedly captured and held prisoner for a century, his absence sets off a series of events that will change both the dreaming and waking worlds forever. To restore order, Dream must journey across different worlds and timelines to mend the mistakes he’s made during his vast existence, revisiting old friends and foes, and meeting new entities — both cosmic and human — along the way. 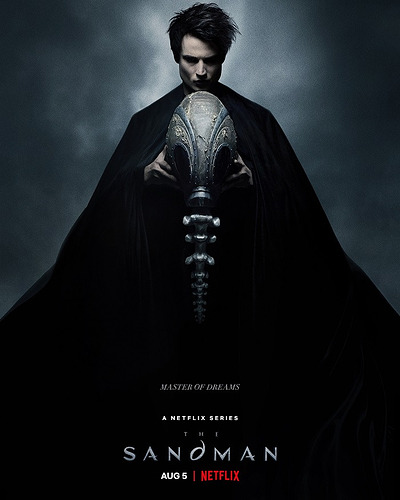 Are you excited for The Sandman to release in just a few short months? What are your thoughts on the casting? Check out our article on all the teaser trailer action here and watch the new trailer from Netflix below. Let us know what you think in this thread!

One thing I’m not clear about is the release schedule. Is it all coming out on August 5th at once?

It’ll be a full season release!

One thing that’s going to take some getting used to:

If it doesn’t succeed, it won’t be for lack of trying on Netflix’s part. They’re promoting this as heavily as they do their top-level shows, like Stranger Things and Bridgerton.

It’ll be a full season release!

Welp – I know what I’m doing that weekend! HOLD MY CALLS.

We got Y: The Last Man on DCUI when the show released.

We got Sweet Tooth on DCUI when the show released.

We got DMZ on DCUI when the show released.

Thinking about it and realized it’s been 25 years now since I picked up Preludes & Nocturnes for the very first time.

So excited to see it come to life.

And I would hope we at least get the issues that take us through The Doll’s House, since this first season takes us through that storyline.

Anyone think Constantine should be in this?

We got Y: The Last Man on DCUI when the show released.

We got Sweet Tooth on DCUI when the show released.

We got DMZ on DCUI when the show released.

Now we need a Fables show

Ha ha, last week I was at a family reunion and the topic of The Batman came up, and I said, “If I can see his pupils, he’s Batgirl at best.”

Just a few of my thoughts (obviously, SPOILERS):

Jenna Coleman is incredible as Constantine, even when she was clearly cast because of her role in Doctor Who - Multiple versions of the same character in different time periods? I think as soon as they decided to have the same actor play both Constantines, an image immediately popped into their head of her in “Sleep No More” (for those of you not in the know, “Sleep No More” is undoubtedly the worst Doctor Who episode that Chris Chibnall wasn’t even tangentially involved in, and it will never stop amazing me that now Clara will be a star of The Sandman).

I’ll admit that some small, blatantly racist part of my lizard brain was uncomfortable with Death being Black, but there could be no better choice than Kirby Howell-Baptiste. Anyone still doubtful should watch the Season 4 premiere of The Good Place, and then tell me with a straight face that there was anyone else for the role. (Sidenote: We really should stop saying “lizard brain”, it’s unfair to lizards… )

Mason Alexander Park is Desire, and I know it’s a weird compliment because it’s not acting, they actually are non-binary, but I think Desire is actually more androgynous in live-action.

Oh, man, and my mom thought Marvel’s Jessica Jones was a disturbing comic adaptation… Wait until she gets a load of “24 Hours”.

Anyone think Constantine should be in this?

According to Neil, the idea to replace John Constantine with Johanna Constantine came from the symmetry of double-casting her to play her present day incarnation and her ancestor we’ll see in some flashback stories. (The ability to get around John currently being claimed by JJ Abrams for his overdue Justice League Dark project is an added bonus.)

Color me intrigued. I don’t watch a lot of tv but I will make an exception for this.

The books were excellent, obviously.

The Audible series was great and a very cool adaptation of the books with excellent audio design.

I’m expecting this to be fantastic and am very much looking forward to it coming out.