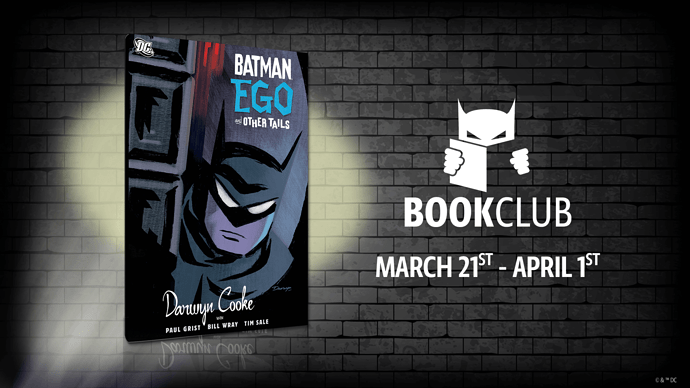 In celebration of the recently released film, The Batman, we’re kicking off the next Official DC Book Club with Batman: Ego! A dark journey into the mind of Bruce Wayne, Batman: Ego takes you behind the cowl and into the ego of The Bat. Plagued by the death of his parents, Bruce pursues Buster Snibbs, a low-level street thug. Will Bruce reconcile the madness that lies between himself and Batman? Only one way to find out…

And of course, what would the Official DC Book Club be without some awesome digital perks? Check out these digital wallpapers and bookmarks!

Cool! This is definitely a favorite of mine. Looking forward to revisiting it once again.

Looking forward to it! Haven’t read it yet. I’ve heard it’s great.

Haven’t read this one yet, but it looks good!

I feel that the persona of Batman is a collective unconscious of Bruce’s fears, emotions, and memories that he holds on to. His Batman persona started creating form around the time Bruce’s parents were shot in Crime Alley.

What happened with Buster at the start of this story can only be described as one of Batman’s worst nightmares. Bruce has dedicated his life, made it his mission to save the lives of those affected by crime, to be the hero that he wished was there when his parents died. To be hit with not only the fact that this man murdered his wife and child, but the idea that Batman’s methods of his war on crime may have caused it would be very traumatizing.

Like I said, what happened with Buster likely played a huge role, but I think that was just the straw that broke the camel’s back. We see when Bruce is driving back to the cave the snide, off-hand remarks that others make about him. We see the physical toll his war takes as we meet Bruce bleeding from a nasty wound on his shoulder. We see in his mind how he’s become used to the violence and mayhem of his war and I think a part of him is terrified of that, that he might eventually become numb to it.

But Bruce can endure all of that if he believes what he is doing creates some sort of good. His faith in the purity of his mission was shaky at the start of this story, but Buster completely shattered it.

First, I would call the entity Bruce is meeting “The Bat,” as it is the manifestation of the symbol of fear that Bruce wanted to invoke, and Batman is Bruce’s attempt to recreate it.

As for the question itself, I think an argument can be made that the Bat is the god of Bruce. What is a god? I think the most basic streamlined answer is a being or the idea of one, that epitomizes a concept or idea that is worshipped. I think that definitely applies to Bruce and his mission.

It’s a comparison that’s almost been there from the start. After all, look at the very first rendition of Batman’s origin when he first makes his vow:

He’s sitting next to his bed, his hands clasped together…like a prayer.

I think the flashback to the Christmas before the death of his parents shows that The Bat was there to a certain degree, as a mix of a love of adventure and heroism in the Zorro action figure, and a sudden, terrifying understanding of death from Bruce witnessing his father being unable to save of of his patients.

I think it’s fair to say the Bat is trying to control Bruce for the mission, but it doesn’t make what happened any less true.

I don’t think so, at least not in a way that would be genuinely helpful to both.

I’m actually reminded of a JLA story that tackled this called “Divided We Fall,” which was shortly after the “Tower of Babel” storyline. From what I remember of the story, the team (plus Batman) are propositioned by fifth-dimensional aliens to separate the team’s hero and civilian identities into separate bodies, so that they can fully commit to both sides.

Of course, it doesn’t go as planned, and with Batman in particular, Batman becomes more and more disconnected from humanity. Meanwhile, Bruce still has the trauma of what happened to him, but without the means and ability, and is nearly killed when he tries to stop a mugging he witnesses.

As messed up as it sounds, Bruce being a crimefighter is probably the most mentally stable thing for him. Well, except maybe therapy, but…ah, perish the thought!

Hello I’m new to the community and was wondering where the questions that other members are answering came from.

Wishing you a warm welcome to the community! Let the moderation team know if you need anything!

As AlexanderKnox mentioned, they’re available in the top post of this thread. I’ll share them below for you so you don’t have to go hunting this time

Thanks for the help

A new set of Book Club questions is up!

He saw the cost of Justice and the infection crime can have. Even when he wins he can still loose and that made him question everything he’s done.

As I said above he blames himself for what happened and think no matter how many people he saves there are always those that could die or worse. As it ties to his need to control everything and when there is none he struggles with such.

I don’t think so. Just him using it as an expression of fear and confusion in him of all people seeing “Batman” in his presence.

I think it’s true. Something like Batman doesn’t just spawn out of the blue. When it’s that child like fantasy brought life by trauma and fear that fantasy was there in some way. And that’s death opened the door for Bruce to embrace it.

No. honestly as many versions Batman is Bruce and Bruce is Batman but none are one without the other. Bruce of course give resources but allow him to help in other ways and see the world outside of his grim view even if he’s faking it as Bruce a lot. If Batman just had that dark view he would have died or crossed the line long ago.

I think it’s both. A bonus to ease his guilt and keep him from going down his narrow fake view but also an obstacle as he need justification a lot to do what he does halting a lot of growth. Most likely from living without parents he can never get those direct answers of his avengers of them is right so seek seeks it out through other to fill that need.

Yes an no. Sure there are many cases like Two Face or Joker who could be said to have been caused by him but they could have happened on their own or become something worse. But in the end thinking of what ifs that can’t be changed won’t change a think they’re here and need to be stopped and helped if they can be.

Maybe both insanity and clarity. Like his dad mentioned sometime people are hit by a lot of emotions and some times something just comes out.

Batman would have gone too far and Bruce would live in regret. Without that humanity Batman can do real damage only hurting Bruce in the long run.

Like all with life it’s balance. Your good bad and even crazy

. Find balance with that can lead to better understandings and in the end a better you. That’s what I think he was going for the best him of both night and day.

I think it has its pros and cons. On one hand, having friends in the force makes Batman’s job easier in that he’s not constantly looking behind him for the police after him.

On the other hand, having the police backing him takes a bit away from his mystique, makes criminals think he’s just some nutjob in a suit. Also, being close to the police potentially blinds him to corruption within those ranks and to the people can make him look like an unofficial avatar for systemic corruption and abuse.

I’ve always found that logic a little faulty. People like Strange, Penguin, Scarecrow, Catwoman to an extent had problems and issues long before Batman ever showed up. Their outward appearances may have looked different, the scale might have been different. The only person you can argue maybe he created as a monster is The Joker, but that’s because we don’t necessarily know his origin, who he was before the acid bath.

Also, can someone explain the whole “underdone potato” joke? I never understood that.

Not well. I mean, it’s a nice idea in theory, but there’s only 24 hours in a day and only one body between them, so that’s going to cause problems. How is Bruce going to galevant around Gotham when half of his time he’s letting the Bat take over?

It’s funny that we’re talking about this after Moon Knight on Disney+ dropped, because I think that’s a good example of what it would look like it Bruce and Batman were two separate identities in one mind.

The true purpose is to help the people of Gotham, not just by scaring and beating those who would hurt others, but by protecting and inspiring the good of the city as well.

How can they balance things? Honestly, at the end it feels like not much has changed. It isn’t so much that Bruce found a better way to fulfill his mission, but more accepted that there is going to be consequences, compromise, and sacrifices for himself in order to do so.

Looking forward to reading this one!