Big news: The Limited DMZ series is out on HBO Max today! Will you fight for yours? 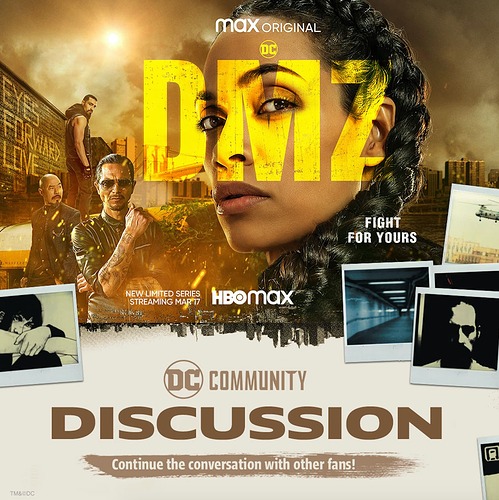 If you can’t get enough of Alma Ortega’s dystopian adventures across a conflict-ridden America, join the Official HBO MaxWatch party tonight at 6pm PT, over on Scener! After you watch, come right back here for all your DMZ discussion goodness. The fun doesn’t end there! Not only does the new series kick off today on HBO Max, but DMZ is free to read for registered DCUI users! Read along with the show and stay up to date on all things DMZ.

In the near future, America’s worst nightmare has come true. With military adventurism overseas bogging down the Army and National Guard, the U.S. government mistakenly neglects the very real threat of anti-establishment militias scattered across the 50 states.

Enjoy the read and the series! See you back here for the discussions! Just read the first volume of this series and it is great! I’m going to start the TV show at some point, hopefully soon. I need to add it into my tv watching rotation now.

I will be checking out the show after I finish the comics. I just finished volume 6 so I expect to be watching the show this weekend.

It’s curious that the comics were added as volumes, not issues. I wonder why?

My assumption would be that they weren’t actually digitized until some time after 2012, at which point it was much easier to digitize the collected versions rather than each individual comic.

ComiXology has the individual issues so they are available in that form. It’s weird that they aren’t that way here.

DMZ the show is not DMZ the comic. For example, Zee becomes the major character and Matty is nowhere to be seen. Not only that, but it seems that Zee is a few characters all rolled into one, Decade Later comes to mind.

There are other major changes from the comic to the show but I don’t want to dwell on them. I will just leave this quote from Stephen King found in a letter he wrote about Under The Dome, the tv series.

That such a re-imagining had to take place was my only serious concern when the series was still in the planning stages, and that concern was purely practical. If the solution to the mystery were the same on TV as in the book, everyone would know it in short order, which would spoil a lot of the fun (besides, plenty of readers didn’t like my solution, anyway). By the same token, it would spoil things if you guys knew the arcs of the characters in advance.

While the show is a re-imagining of the comic, it is still a fun watch, 1.5 episodes into the 4 episode series. The world is authentic to the comic, danger is lurking at every corner.

I just watched the first episode and I wasn’t sure what to expect but it was great! The first episode does a great job of introducing you to this world and the people that are in it.

I didn’t realize that this was only 4 episodes long. I’m torn between reading more of the comic or just watching all of the show now. But since it seems to have split off from what I have read of the comic by a lot, I think I might just continue watching and catch up on the comic afterwards.

Just gonna park these right here in case anyone is interested… 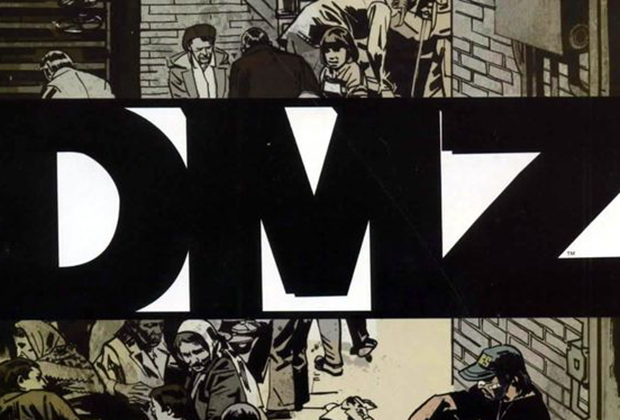 [image] The newest DC-related, HBO Max Original series has arrived, and it stars Wonder Woman! Well, a Wonder Woman that is (ICYMI, Rosario Dawson is badass, and not only in how she voices Wonder Woman, but in general).

Based on the Vertigo comic of the same name, DMZ is set in the DMZ (demilitarized zone) of Manhattan, during the second American Civil War. If you’ve read the book, you know what’s up and are likely jonesin’ for the show. However, if you haven’t read D…

I am interested in your thoughts after you finish both the show and the comic. They are vastly different but very much the same. I liked both a lot and ended up losing some sleep as I read late into the night and then again watching all 4 episodes late into the night.

I’m currently on episode 4 after I thought I wasn’t going to watch anymore today. So, I’ll let you know what I think when I finish!