This is turning into a good mystery…

Can’t wait to read the final book. Think I know who this Villain is, but then I could be wrong.

The final round of questions has released for this instalment of the DC Book Club!

Hello @Jitsu & @Alec.Holland,
All good thing has to come to the end, and @Vroom was right, this was a good pick series.
Glad Catwoman won the poll, and I’m looking forward to the next book pick. Maybe we can do a tribute to Neal Adams & George Pérez. I apologize to any DC fans if I spell their names wrong.
Anyway here’s the answer to your week 4 question. I’ve read the book a couple of days ago.

That’s it for this week. Thankyou again for a great book read.

I thought the bat signal conversation was funny. It was for a good reason!

Without the mask she’s still her. The grey and complex characters willing to help especially those who are normal overlooked. The mask made her hide that so she can enjoy herself.

Selina’s. I like bats but that definitely something he struggles with is seeing that good people can make bad mistakes and sometimes even terrible ones that you may think only bad people will do. In the end people are complex. Life is never just black and white even if sometimes it’s may seem easier to see it as such.

The only one is the history. A lot of things she’s enjoyed for herself and the trill of it all. The new one is the fresh start. A chance to find more in her life than just thieving and bats. Maybe even to help some people.

A bit contradictory. But that’s Bruce. His black in white views make it hard for him to see greys like cat but he’s very picky and choosy with his exceptions. And even those exceptions he still pushes then to be pure white like him.

I think there’s a lot that motivates her. Whether personal thrill or helping those overlooked and less fortunate as I mentioned. He cause it to be herself and if that includes helping or thieving she will.

I wouldn’t say for nothing they do help in the short term. Such as Lee death destruction and the whole shabang. But those problems she’s looking at a the long term societal problems that have been around before bats and capes. Those issues require more that just bats stoping a thug and the occasional inspirational moments which only sticks to a few

She can definitely make an impact to those communities bats and the rest may miss and even some of there’s as well.

She sees herself in then and doesn’t want people to go through what she has. She knows how they can be never seen and wants to give them someone they can see looking out for them.

Its possible. There are good cops like Gordon and Montoya out there. Even bullock is iffy but overall a good one. Not going to a a broken egg make me throw out the whole carton.

They are to be you. Live your best life. Look out for your fellow people. Nobody’s perfect. Everybody deserves a chance.

That she struggles with failure and the pressure put on her but like Selina will help and never give up.

Cat has been feeling like herself. She’s feeling like she’s doing something important to her but helping others. Doc is probably struggling with similar issues of putting other’s issues as your own.

She just cares. She doesn’t care if rich are scammed but if innocent people are then there’s a problem.

When she saw he left and the poster guy looking like the one that left. She knew she was looking for a master of disguise do that tipped her off.

They show that Gotham is more than just big buildings and dark streets. There is a lively bunch of people here with a diverse range of interests and personality.

She’s willing to give chances even to the worst because she herself has been the worst at points and changed. As the rest may only see the worst in people and believe that is all they are.

Similar. Many Gotham’s villains are people in situations that lead them to a wrong path. With there mental illnesses and wrong done to them by more powerful.

I think that was more instinctual self defense. Not looking at the results.

Probably both a bit bothered as she could have used just for attention which she enjoyed in the past. But also to give the sense of his city his rules thing he does with all his allies.

Her place is to help those the ones on top may miss. Give opportunities for them all. A chance at something better. And even willing to get dirty doing it.

It’s a good thing he didn’t say,“You call me here for this? The Batsignal is not a beeper!”
@Vroom would definitely get that reference

Hee-hee! I do love me some Batman Forever.

…and I adore me some Brubaker-penned Catwoman.

In the opening pages of Catwoman #1, we see Selina and a psychologist discussing her identity with and without “the mask”. At this point in the story, who do you think Selina is without her mask? What makes up her character and personality?

Throughout Catwoman comics, we often see a different side of Selina. Usually, this is to make her a more sympathetic character as opposed to the femme fatale/thief that was previously seen in Batman comics. Her sister is usually involved in some way as the catalyst for Selina trying to do better. Now, things don’t always work out that way for her but the intentions are there. Seeing her with Leslie at the beginning of this series shows she is seeking redemption, another common theme for Catwoman comics, even if she still stealing stuff.

As she witnesses Batman confronting Ridder in the streets below, Selina’s inner dialogue reveals that she lives between the black and white world of Batman–in the “shades of grey” between right and wrong. Who’s approach to criminality do you agree with more? The black and white world of Batman, or the “good people forced into bad situations” approach of Selina? Why do you feel this way?

Batman’s view is very limited. I understand why he has that view but he doesn’t have the ability to see the other side. Sure, he has gotten close to Talia and Selina, but those are for his own needs. Selina is more on point, sometimes good people are put in bad situations. That doesn’t mean they are automatically bad people. Now, the question remains if a good person willingly repeats doing bad things are they still a good person? In Selina’s case, sort of. She might be doing things because that is the only way she can see an out of her bad situation but then her greed gets the best of her.

After seeing her new suit, Batman tells Catwoman that “no matter what”, he still believes she is a good person. How does this align with Batman’s general approach to fighting crime? Does this seem contradictory to you, or does it check out?

This falls in line with what I touched upon earlier. Batman needs to see the good in her in order for him to not throw the book at her. He needs to reconcile the fact that he likes her and she is a criminal. That is for his own good, not hers. Sure, maybe hearing someone who has faith in her might help her but that isn’t why Batman is saying that. It

In the early pages of Issue #2, Selina says "…“No matter how much Gotham changes, some things stay the same.” How do you feel about this statement? Do you believe that despite all the work heroes like Batman work to keep Gotham safe, their efforts are for nothing?

Sometimes the truth hurts. I am hopeful that things can change. In the real world, there are former gang members who start bicycle clubs for kids. By getting the kids off the streets and with a joint focus, in theory over time gangs would grow extinct because of these kinds of programs. While it might save lives, it doesn’t fix the problem completely. There are still gangs running rampant on the street. In many ways Gotham mirrors society. There might be a small group of people fighting vicious criminals but it doesn’t put a stop to crime. The efforts aren’t for nothing but it is impossible to expect a huge change in society.

Why do you think Selina cares so deeply for the underserved/underrepresented people of her city? Do you think her concern is justified?

She is one of those people. She comes from an abusive family and ended up in an orphanage. Her concern is valid because of how close to home it hits.

Why do you think that Selina has been sleeping peacefully since she put on the new costume?

Batman makes a point to lecture Selina about never using the bat signal again, even though she had no other options, and he still helps her out. Do you think he’s really bothered by her using it, or is he maybe just trying to maintain the moral high ground over her?

This is Batman trying to place Selina in a box, a world where she follows the rules. Once again, I think this is him convincing himself that she is a good person and good people don’t break the rules, even if the cards are down and there is no other way.

Edit:
May 14th was the anniversary of Darwyn Cooke’s passing. Jimmy Palmiotti posted this picture on Twitter saying “His last gift to me.” To keep things on topic, Catwoman is inside the diner but this might be my favorite picture from Darwyn Cooke. 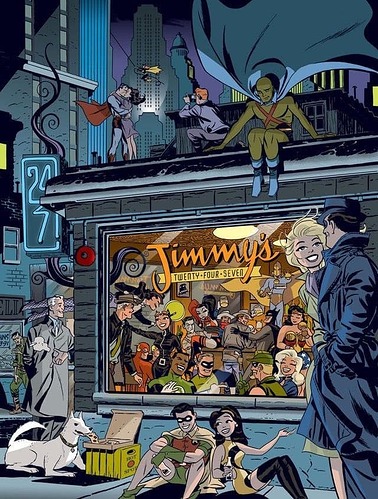