NEVER sell yourselves short. You bring a phenomenal presence here th=o the community and I definitely enjoy your posts. There is ALWAYS someone for everyone. Just because you haven’t met that person, doesn’t mean they don’t exist. Little tidbit, I was alone for at least 37 years on Valentine’s Day, and now I have been married since 2016. I am not looking for sympathy, just hoping a different perspective helps you both out…

I loved this version. What were your thoughts ion the 2012 April?

I’ve only seen that in 2 versions

I was fine with the 2012 April. If memory serves, she was voiced by Mae Whitman who has done work in assorted DC-based projects (DC Superhero Girls, among others) as well as having played President Whitmore’s daughter in Independence Day.

Come to think of it, I can’t think of a version of April that I haven’t liked. Was she in The Next Mutation? I haven’t seen too much of that.

My favorite live-action version is from The Secret of the Ooze (actress Paige Turco FTW), while my favorite animated iteration is easily from the original Murakami/Wolf series. Afterall, you can’t beat a brunette in a yellow jumpsuit.

Unless it’s a redhead in a yellow jumpsuit.

Okay @Applejack, there was a slight debate over an issue that has plagued everyone since the dawn of time, and only YOU can provide the answer:

Can cats be trusted?

If you ever get a chance to see Batman Vs. TMNT, you are in for a treat! Great action scenes, terrific animation, designs are great and character-accurate, and…spoiler alert…things get crazy!

Kind @Applejack! I have an honest to goodness question this time!

This just came up during a conversation with one of our Birds of Prey reading clubs. There was a bunch of free DC Sneak Peeks published as part of Convergence. For some reason, only one of those is actually here on DCUI: 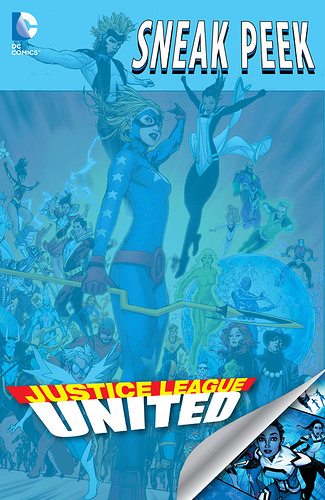 With the Convergence concluded, Alanna Strange, Star Girl and Equinox assemble brand new and wildly untraditional teams of heroes and villains to work...

But all others are available on the DC Comics site:

Any idea why this is? As they are free to read, could they be added to DCUI as well, as part of their respective series? There are original stories, not just samples. This will make a good addition to our various book clubs and bolster our overall comics count!

EDIT: Glob! @KookieSuperApe just created this wonderful new thing with a handy little spreadsheet of all the Peak Sneeks, and where in each series they fall!

…upon my mustering the courage to ask her out…

I suppose I could offer some advice, but I don’t know all the details of your particular situation. Maybe the stuff I said in the Valentine’s Day thread applies, or maybe not. In any event, I’m sure you’ve heard the old line about how the worst she can do is say no, so there’s no point in doing that.

Instead, I’ll tell you a rather embarrassing story from the real world.

And, hey, it involves a topic we’ve recently been talking about: redheads!

It was a late Saturday afternoon right after working that morning and before the pandemic shut everything down. A bunch of us, friends, co-workers, were at a social club. It was a private club so there were people from many different age groups.

While I was talking to assorted people, I saw an attractive redhead at the bar. One of my friends, who would love to be a matchmaker for me, was there so I asked him, “what do you know about the redhead?” Now, at this point, my matchmaker friend, if he knew nothing, should have said as such.

But, of course, that didn’t happen. Instead, my matchmaker friend, likely inspired by a couple too many drinks, heads straight to the redhead. With the instant knowledge that this impending conversation will not end well, I’m muttering all sorts of expletives, the type where even Lobo would’ve said, “hey, a little strong there!” After my blood pressure spiked about 30 points, the matchmaker friend comes back and tells me, “her name is [something, I don’t remember] and she expects you to buy her a drink.” Then, after believing he performed his daily good deed, he leaves to go home and I’m wondering what kind of alcohol-fueled wreckage he left behind.

Shortly after, my sister, who heard of the gathering, shows up. I tell her what happened and she goes, “I got this.” Now, sister is quite the social butterfly and can be a great wingwoman. In short order, she’s in a small circle of people with the redhead. Of course, that gives me an opportunity to head over.

I buy a round of drinks, which means I did buy the redhead a drink along with other people in the circle. Another person in the circle that I bought a drink for strikes up a conversation with me and we start talking for a while. She seems like a very nice person.

As the conversation progresses. slowly I find out this person I’m talking to is the mother of the boyfriend of the redhead.

Oh, it was a perfectly lovely conversation. She told me how she looks forward to the redhead becoming her daughter-in-law if her son finally proposes (I didn’t want to burst her bubble by saying what my matchmaker friend said about me buying drinks for her potential relative-to-be). I gave some advice (yeah, I can hear some of you guys saying, “Of course you did, Doc!”

) on different ideas for her son to propose. Had a very nice time talking to the mother. Hopefully she didn’t notice all the steam coming out of my ears like an old Warner Brothers cartoon character.

Now, is there a moral to this story, like maybe I should have talked to her first, or maybe my matchmaker friend inadvertently helped me dodge a more expensive bullet? Probably not. But I did get a story to bust my matchmaker friend’s chops about how he failed me as a wingman! That makes it SO worth it!

Good luck out there, Vroom and Sean!

What about those who are not fans of TMNT? I was also not impressed with Soul of the Dragon…

Actually, I’m not a Turtles fan, although my cousin’s two sons are. I did think the combination worked very well.

@Vroom Oddly April was not in Next Mutation, not even mentioned

EDIT: Glob! @KookieSuperApe just created this wonderful new thing with a handy little spreadsheet of all the Peak Sneeks, and where in each series they fall!

I told AJ I wasn’t joking when I said that I geek out over spreadsheets!

Dearest Applejack, how bout them transparent dangling carrots? How bout stopping eating when I’m full up? How bout unabashedly bawling your eyes out? No? Well, how about that Crystal Pepsi?

Serious inquiry time, is there an easy way to stop following posts so you don’t get notifications any longer? Not that I’m not interested, just I have fallen so far behind I can’t keep up. Thanks…

Like if you want to make it Normal instead of Watching??? Because if so then just go to the bottom of the page under reply and you can change it there… @Applejack probably has a better answer

Thanks for that, didn’t even see that…

Heh heh, even April knew the Next Mutation ship was one to avoid.

@Applejack Ahoy hoy! To answer two inquiries of yours, which were replies to queries of mine from last week:

Like I said previously, I’d only seen pieces of episodes, but having seen about half of season one so far, I like the show, alot. I’m definitely going to carry on with the series and finish it.

■ 2. Re: my Star Trek binge from last weekend, I watched:

This weekend (past weekend by the time you read this), my binge is of the animated Image-based TV shows. That entails:

Fun Fact about WildC.A.T.S: That just might be the one animated comic-based show that encapsulates two different comic publishers and their universes.

When it debuted on CBS in 1994, WildC.A.T.S was an Image property since Wildstorm was part of Image at the time.

However, once Jim Lee sold Wildstorm to DC, that means WildC.A.T.S could then retroactively be considered a DC-oriented show.

This is why WildC.A.T.S is my all-time favorite Image show, because of it simultaneously being of the Image and, retroactively speaking, DC brands.

pushes up glasses, sighs and sits back in his chair

Well, that was a fun read, wasn’t it?

If Nick Toons ever actually airs the flick, I’ll happily check it out.

Fun Fact: Redheads make the world go round. This fact can not, in any manner, be argued against.