Love watching Jingle all the way every year for Christmas, Sinbad was hilarious in the movie!

Nice dig @Aristarchus94.72134. I remember writing this a looooong time ago.

Jingle All The Way is one of my favorite Phil Hartman movies.

For me, one of the best things about Jingle All The Way is scoping out the real action figures that were used for set dressing, both in Jake Lloyd’s room and the assorted stores Schwarzenegger goes to.

It’s just like in Shazam! when Sivana is pursuing Shazam in the mall toy store and you see real DC toys lining the shelves, along with some clever mock-ups of toys that don’t exist but were made with toys that do exist.

I used to love Bob Rozakis’ Ask The Answer Man! It’s like you’re carrying on the legacy.

Any chance we can get the DC Comicmobile up and running again, too? 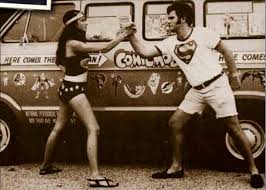 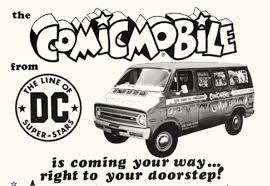 Thanks @wrightline1.42741 ! I was very proud of the Luthor piece. I’m glad you enjoyed it! Serious praise eh? I’ll have to check that out! You mention “Ask The Question” and I’ll use this opportunity to give some praise of my own … @HubCityQuestion has been an awesome motivator, and his creativity has inspired to try new things. He’s also been a good friend.

How are you guys feeling prepping for con season?

Hey everyone! Just popping in to let folks who were asking about “Coming Soon and Last Chance” for March; there is nothing coming OR leaving the service, with the exception of:

And a TON of Meta Madhouse fun!

This means we will be posting our usual “Last Chance, Coming Soon” post closer to the end of March, in alignment with our PR announcements

Let me know if you have any specific questions about upcoming comics or DCU ASG in the meantime!

Now that’s a van to hop into!

You say you had a brilliant idea immediately put me in the mind of Blair Warner from the Facts of Life, good times!!!

Love David Letterman!!! Went to NYC to see Madonna in MSG in 2001 (literally 5 weeks to the day before 9-11). While I was there I HAD to g o to 53rd & Broadway. They had pages asking questions, I answered and won tix to the SAME day as Madonna. I say I made the most of NYC in one day I could…

I’d say you did too, and cool beans on the win.

Letterman’s a badass. From heckling recordings of NBC news shows to the Alka-Seltzer suit to Top 10 lists, Rupert Gee, goofing around at Taco Bell and McDonald’s and also breaking stuff in all manner of wonderful ways, the guy knew how to do comedy, and was pretty darn good at interviews too.

Speaking of Blair from The Facts of Life, Lisa Welchell is hosting a show on MeTV called Collector’s Choice. One guest of note was Adam West Batman fan Ralph Garman, who has also been on DC Daily.

I saw part of the Elvis episode. I wish they would stream so I could see more

That, and broadcast in HD. The show looks kind of crummy in SD. Still fun though.

Just finished the “Ghost in the Machine” episode of the Flash. Might want to see if they can fix the autostart on the next episode because there is a scene that will get cut if it isn’t “returned”

I will say I am disappointed they are not at least rotating back in a few movies, only because it would help further quell the doomsday sayers, some of whom I am sure will spin nothing being added into a “it is preparing to merge into HBO MAX” agenda, as if this is the first time nothing has come or gone in the month.

But glad nothing is leaving and DCU All Star Games I think could be a surprise fan favorite show. So I am still happy.

Ahhh, the 70’s. What the heck were we THINKING?

Hey @Applejack, I’m thinking of going to the San Diego Comic Con in July, but I was wondering if DC Universe has anything special planned?

Dearest Applejack! I may have missed some information about this if it has been shared recently, but as I recall there was never a hard no (or a hard yes) on Black Label issues being added to our library. Is this still a gray area? Or is it part of the rule that we don’t get things like graphic novel originals and select comics like Mister Miracle (and is there any timeframe on that? ever?). I would really love to read these Black Label books, especially with the new Birds of Prey run, but my only other option would be Hoopla, which is less than ideal as a comic reader

The man you’re listening to has once again come seeking aid and comfort. As the closest thing to a comic book therapist (certified or otherwise), your mission, should you chose to accept it, is twofold. First, pierce the veil of decades held ignorance, on matters that appear to have passed him by. And second, find the light that will help guide him through the darkness. For the dark things cannot stand the light. The light of the Gre …, sorry, kinda’ veered off course there. Any way, this message will not self destruct, unless you delete it. Happily, I know you won’t.

If you haven’t picked up on it yet, you’ll find that I’m very " ole school " about a lot of things. So, for the most part, my comments tend to stick to older and simpler material. In all honesty, I stopped reading DC after the introduction of the New 52. Oh, I’d check back in periodically. Picking up TPBs and GNs every now and then. But the company was changing too much, to often, for my tastes. Every time I turned around, I was getting hit with some new CRISIS, or other. Reshaping the landscape. Trying to explain away this past decision or that silly mistake, or some other editorial response to flagging sales in the marketplace. This REBIRTH thing appears to clear the table. Start the game fresh, from a new day one. It may get me back, at least on a trial basis. I was a big fan of WATCHMEN. So, to learn there’s an incorporation there now with the DCU, might be the ticket to get this passenger back on board. We, shall, see.

About a month ago, I complemented HCQ on his breakdown of the New 52 continuity, as it related to Grant Morrison’s Multiversity Guidebook. Then, applying all that to the new REBIRTH storylines, his response was (and I quote), " there are just many, many more Earths beyond those 52 now." In his “Guide to the Multiverse” article on Jan 17th, he tried as well as anyone could, to bring some common sense understanding to all these company wide shakeups. Which also helped explain away my concerns about the crossover Earths, once shared with MARVEL. Again, well done sir!

I’m sure the Elseworld and Tangent line of titles were a delight to many. Just not my cup of tea. But then I’ve never liked the Super-computer simulations or Alfred’s type written imaginings either. And if it weren’t for the collected crossover into the regular DCU , " Tangent: Superman’s Reign," I would have remained quite ignorant of those other dimensional dopplegangers.

Of course another crossover, on a much grander scale occurred several years later under the title of CONVERGENCE. A clever way to draw me back in, ladies and gentlemen. And it worked, more or less. Combining many of the Elseworld, King Kirby, and other characterazations with the regular (or current) DCU was an awesome task. But in the end, most worthwhile. Your team of writers and artists are to be congratulated on a job well done.

I mean getting Captain Carrot & the Zoo Crew together with Flash, Harley Quinn and others, in a serious and meaningful way, was no small feat. I applaud both Tony Bedard and Steve Pugh, the writers on those particular chapters. Something that might’ve seemed more at home today, on an episode of HQ, was suprisingly successful in print! All that, years before Ms. Quinn and her outrageous cast ever debuted on this wonderful site. And it also got me to read and care about those other what if… worlds, who’s original stories I had dismissed out of hand. I now count the tpb collection of CONVERGENCE titles, among my very favorites. Maybe you can teach an old dog, new tricks.

After DC Universe All-Stars airs… would it be feasible to run a similar play-by-post roleplaying campaign here on DCU? Maybe we could distribute the rule sets to people who sign up, and have a moderator or volunteer run the scenario. We could even schedule weekly sessions to ensure everyone’s there at the appropriate time for the action. I can think of a few people who would make great players here, and a few more who would make great campaign managers.

It didn’t end up going anywhere, but @biff_pow, @Aurora, and I had discussed doing something along those lines a while ago. I’d definitely be interested.