Ode to the Comic Book Editorial

Back in the old days, when we bought comics off the stands of gas stations, grocery stores and comic shops, and didn’t have the internet like we do now, there were these pages in the comics that would be used to advertise what was coming soon or give a spotlight to a creator or character.

Vertigo’s On the Ledge was a monthly editorial that also stands today as a time capsule listing all the comics published each month in the line.

Mark Gruenwald had an editorial much like Denny’s over at Marvel, called ‘Mark’s Remarks’. In one in particular, Mark answered the question of ‘what makes a good superhero team?’
I remember saving that comic, just for that editorial.

DC and Marvel had been doing editorial pages since forever.
DC had the Daily Planet in the '70s, which featured The Answer Man, Direct Currents solicitations and cartoon strips by Fred Hembeck.
The Planet ran until '81, being slimmed down into just the Direct Currents portion of the page, which was moved to the letters pages.
Later in the '80s, however, would see the arrival of ‘Meanwhile…’, which would be prominent in the DC comics during the time of Crisis on Infinite Earths.
Again, however, it would eventually get trimmed down, sometimes only appearing in the comic shop-only titles.
Before it, too, would vanish from comics.

While Marvel had their own company-wide editorial page, similar to Daily Planet and Meanwhile, which was the Bullpen Bulletins.
Bullpen Bulletins would give short brief news about the goings ons at Marvel, and would also give monthly comics solicitations.

The solicitations in both DC and Marvel’s editorials back then would seem very light compared to these days.
Marvel would mostly just give a checklist with the titles and issue numbers, and maybe a note if someone was guest-starring. But they also had a monthly ‘Hype Box’ where they’d take one to three titles and give a much more detailed solicit.
DC would give a little info, usually a sentence or two, for each comic. However, DC’s pages only listed comics coming out that week, not the whole month like Marvel’s checklist.

DC and Marvel would eventually take the concept and go bigger with Marvel Age and the Direct Currents pamphlet, turning the one-page editorial into a monthly newsletter or magazine.

DC and Marvel weren’t the only ones doing the editorials.
I also remember Cat Yronwode having an Eclipse editorial that used ad space in Amazing Heroes.
Dave Sim had his Notes from the President, in Cerebus where he’d give first-hand advice on self-publishing, as well as general ramblings.

In addition, letters pages of first issues of a new comic would often be a full page essay on the character or team, bringing the reader up to speed on how they got to where they were now, as well as giving info on the creators and how they got involved with the book.

Taking this even further, Roy Thomas had an editorial in the '80s Secret Origins series where he would give more info on the featured characters in that issue.
He would tell where their first appearance was and then fill in details behind the scenes and do a sort of ‘where are they now?’
He even ran a ‘Who’s Who in the Golden Age’ thing in the letters pages of All-Star Squadron, listing all the Golden Age DC heroes and where they first appeared.

Unfortunately, these editorials don’t make it into the digital archives.
Many may never be seen again.

The Daily Planet pages and most of the On the Ledge editorials have been collected online, and I believe Mark’s Remarks and Dave Sims’ New from the President have been saved, as well.
It’s just a shame that readers of old comics digitally don’t get to see the excitement of what was coming out at the time, or have the same features to inspire into checking something out.
Or even get that internal view of the comics from Stan Lee, Dick Giordano, Karen Berger, Roy, Denny, Mark, Cat or Dave.

Anyone have links or archives of these?

Mike’s Amazing World has the Daily Planets in the Gallery.

On the Ledge on tumbler, collected many of the Vertigo editorials.

And from the depths of the Wayback Machine, here’s a collection of Mark’s Remarks.

A couple of stand-out ones from Mark’s Remarks:
His remembrance of Gardner Fox, one of DC’s most important creators, after his death.
And his answer to ‘what makes a good super-hero team?’

And a rare glimpse of Vixen #1 in a Daily Planet preview for the book that didn’t get released. 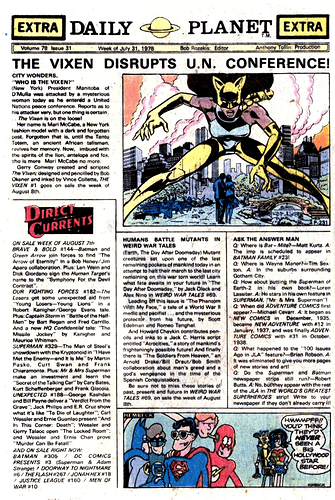