Welcome, @ObscurityofDCClub and other members of the DC Community! Welcome to Obscurity of DC’s ninth Ultr-Obscure Book Club! This week, we’ll be starting a 2-week focus on… 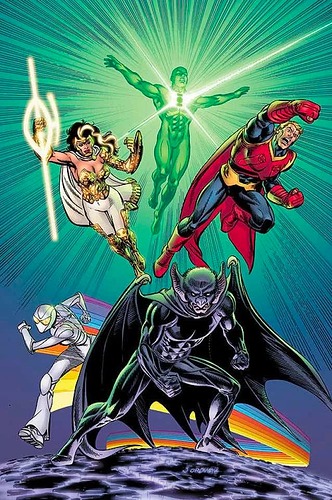 Number of Books: 1 (We’ll only read the first one this week).

I read these ages ago (2012?) because a marble-stan owned some of the floppies and I was visiting (and bored, plus his X-Men collection was frankly terrifying in the same way kids new to DC look at the Legion stuff. All I really remember about the Bat and WW stuff was that I found the takes confusing whereas the take on GL (which is the one I think worked best) and Supes far less so. I also think it was a mistake to try to make a JLA alternate or connect the universe; it wasn’t really necessary.

So the GL character was my ‘favorite’ reimagined character an issue but nothing I would (or have) praised when I am asked for elseworld or AU recommendations.