Why hello there, @ObscurityofDCClub and other members of the DC Community! Welcome to Week 45 of Obscurity of DC’s Obscure Book Club! This week, we’ll have a focus on… 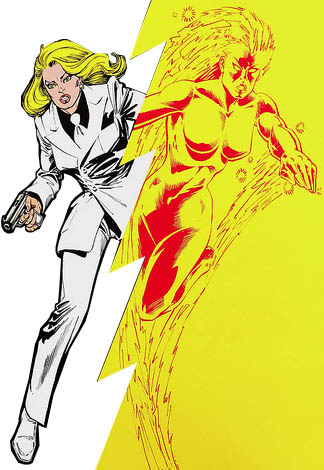 Not-so-brief description from dc.fandom.com: Jonni Thunder is a female private detective who first appeared in a four issue miniseries in 1985 named Jonni Thunder AKA Thunderbolt, written by Roy Thomas. A small gold statue gives her the power to turn into a human thunderbolt, while leaving her body behind. In later issues of Infinity, Inc., the thunderbolt is revealed to be a hostile alien energy-being, who is defeated by being reimprisoned in the statue, leaving Jonni without powers. Jonni existed on Earth-Two before Crisis on Infinite Earths and is briefly seen on the merged Earth resulting from Crisis, attending a detectives convention.

I vaguely remember seeing this on the app before and thought “that might be interesting to check out.” So it’s nice that this club finally gave me the onus to try it.

Overall, it was fun – I did not expect it to be quite as campy as it ended up being. I figured it would be a sort of 80s-infused mystery, but I didn’t expect “Magnum PI via Saturday Morning Cartoons.” I think I would have liked it better if it stayed more grounded and was more about her figuring out what her relationship with the Thunderbolt was, but it’s fine for what it is. It’s certainly a character I wouldn’t mind seeing more of.

I imagine partly it’s because Jonni is meant to invoke the classic, stoic film noir private eye archtype, but I also imagine that since she’s been working this with her father for sometime, this probably isn’t the first time she’s seen a dead body.

I would sooner say that Jonni would rather be working with her dad. But since she can’t have that, she’s settling for being alone.

I would say Jonni because even though she seems to have some control of the Thunderbolt, the Thunderbolt comes off as pretty bland and without personality.

Again – classic Phillip Marlowe move. In her mind she’d rather pursue the case and catch the killer herself, even if it means the police thinks less of her. In her mind, if they were better cops, they would be on her level.

Unless I missed something – which is possible, Roy Thomas is VERY wordy as a writer and I fully cop to skimming a few lines after a while – Slim Chance just wanted the statue as some sort of trinket for his own greed. Meanwhile, Red Nails wanted the statue to power a giant freaking laser. So…yeah, I’m going with Red Nails on this one.

I am fine with adding more female versions of GA or SA characters but this wasn’t a particularly engaging one (versus, for example, Morrison’s reimagine of Shining Knight for Seven Soldiers).