Why hello there, @ObscurityofDCClub and other members of the DC Community! Welcome to Week 18 of Obscurity of DC’s Obscure Book Club! This week, we’ll be continuing last week’s focus on… 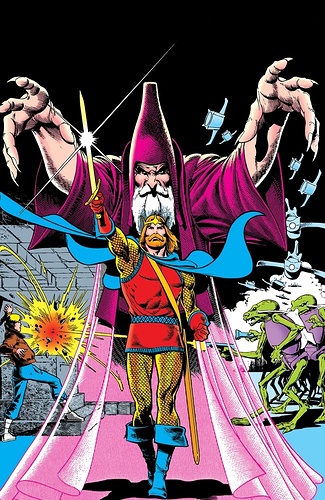 Number of Issues: 6 – Please only read issues 7-12 (Unless you didn’t read 1-6, which you should definitely check out!)

Description from dccomics.com: In the year 3000, an armada of destructive aliens has unleashed an all-out assault on Earth and is poised to conquer the planet. But when a young boy stumbles upon the crypt of King Arthur, the legendary monarch and the Knights of the Round Table are magically reincarnated. Together once again, King Arthur, Sir Lancelot, Merlin, and the rest of the classic knights take on the invading extraterrestrials and their wicked leader, Morgan Le Fay, the half-sister of Arthur. A mythical tale of honor and bravery, CAMELOT 3000 proves that some heroes are timeless.

Camelot 3000 was suggested by @Jay_Kay. If you want to suggest a series to focus on, that follows an obscure character, feel free to put your suggestion in the Reichuss Mansion.

Answering my own questions!