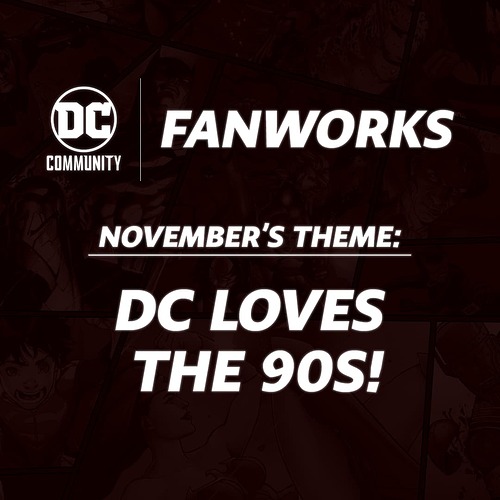 Grunge music fills the air, Home Alone is playing in theaters, and you’re rushing home to catch the latest episode of the Batman Animated Series…it’s time to celebrate the 90s! Whether you were born before, during, or after one of the whackiest decades in history, this era brought us some of the best content in DC history. Join the celebration with your best DC fanart and cosplay, and show the 90s the love that it deserves!

Interesting. Have some research to do but exited for this.

Grab your Furby and rewind that Batman & Robin VHS

I’mma grab a bottle of Fruitopia and this… 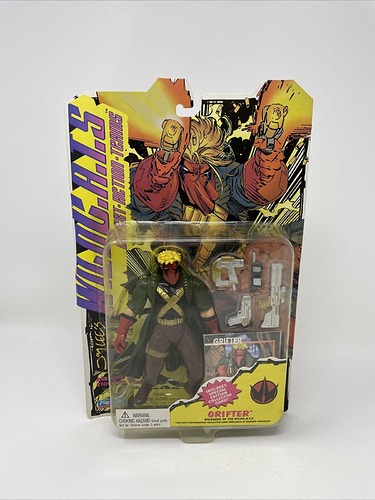 …as I pop my Star Wars: Jedi Knight-Dark Forces II CD-ROM into my 32MB Packard Bell minitower while TLC’s “Waterfalls” plays in the background.

People give the '90s a lot of crap when it comes to comics, but the decade did offer a ton of cool stuff, not just for DC (Hello, WildStorm acquisition!), but the comic industry as a whole (Hello, Image Comics!).

I can’t wait to see what our exceptionally talented visual artisans have to offer!

Love the 90s! There were so many great shows and movies!

People give the '90s a lot of crap when it comes to comics, but the decade did offer a ton of cool stuff, not just for DC (Hello, WildStorm acquisition!), but the comic industry as a whole (Hello, Image Comics!).

You know what @Vroom, we should do a lecture class and give lecture why the comics in the 90s is so good and by far the best, especially DC Comics, there’s so many great moments that we can literally write about it, maybe I should make a thread on it.
We both grew up watching great shows, movies and reading comics because we live through it and understand its history.

I will have to try and dig out a pic of it, but I spent a 1998 Halloween night cosplaying as John Constantine. Of course, the blonde hair spray I bought turned my hair green instead.

So I guess I only have the pic of the hair and the trench coat I bought at Goodwill because I know I put on a white shirt and tie later: 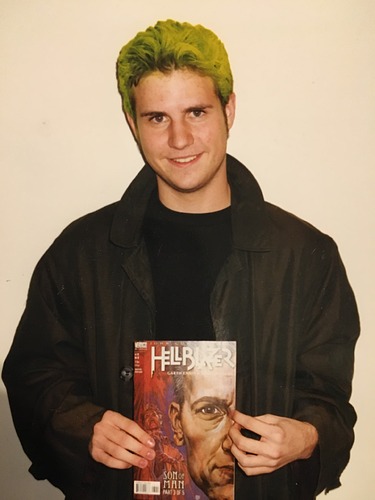 I loved the 90’s.
I was a late 70’s baby, so each decade since then has meant something special to me in their own ways.
I’m currently drawing a new piece, and I really hope it fits in with this theme.
It does to me, and I’ll explain why when i finish and post my drawing.
But i just hope y’all think it fits as well.
Great posts so far everyone 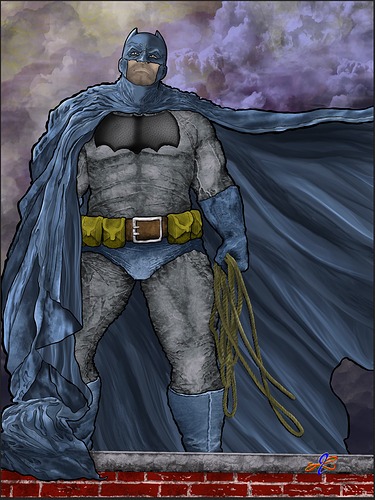 Ok Fam… so, i worked on my DC FanWorks November Theme over the weekend.
Ok, so, I was in my early Teenage years when the 90’s hit, so it was right after the 1989 Batman movie came out, so I was seriously addicted to Batman.
Then all throughout the 90’s, there were so many great Batman movies, tv shows, animated cartoons, and lets not forget all the reruns of the 1966 Adam West Batman that was playing each week as well.
Anyways, needless to say, I wanted to try to pay tribute to one of my favorite DC Heroes of all time, that I had been obsessed with reading my whole life.
So, I wanted to try drawing an amalgamation of a mixture of how I pictured Batman when I was younger.
Although I went back and forth trying to decide whether or not to go with the gray and blue, or the solid black colors…… I just went with the blue and gray.

Hopefully I didn’t mess him up too bad.
As usual, any comments or critiques are appreciated. 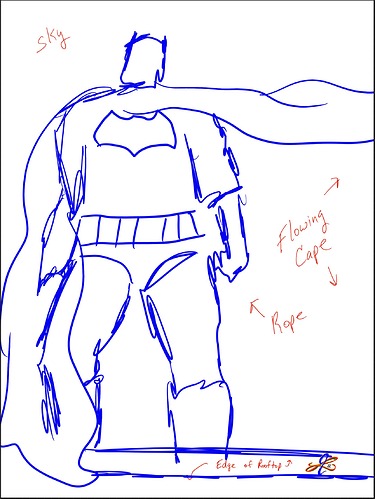 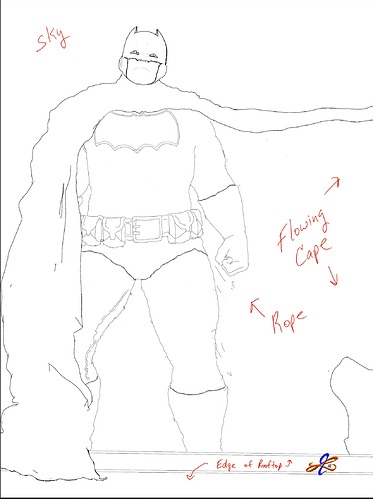 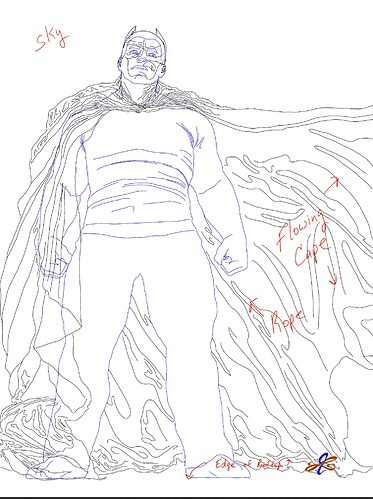 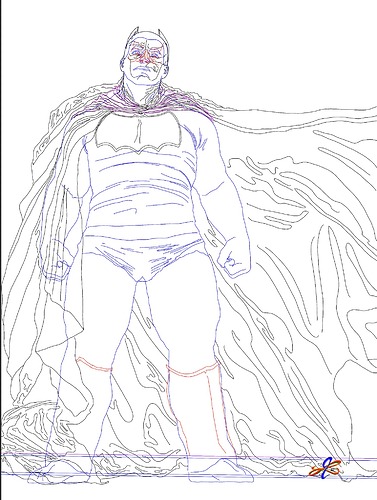 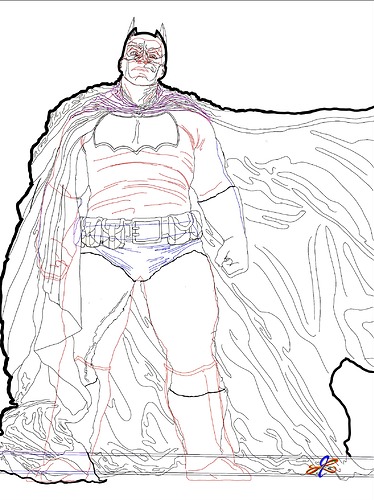 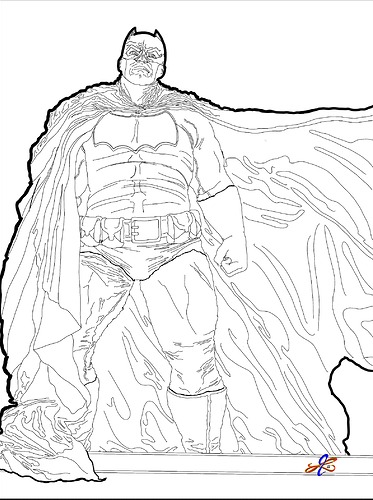 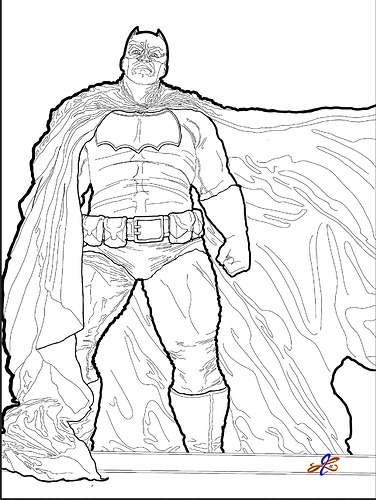 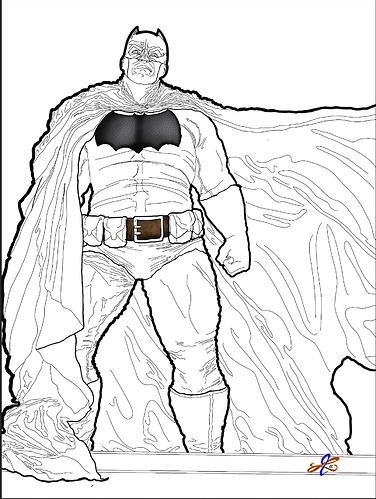 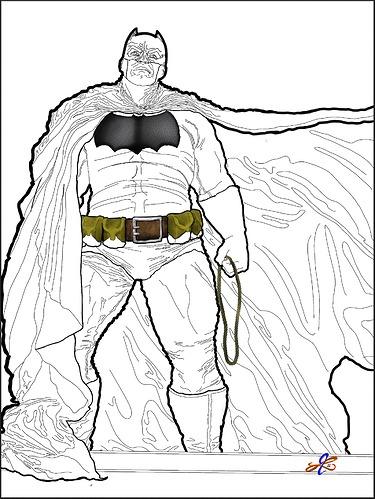 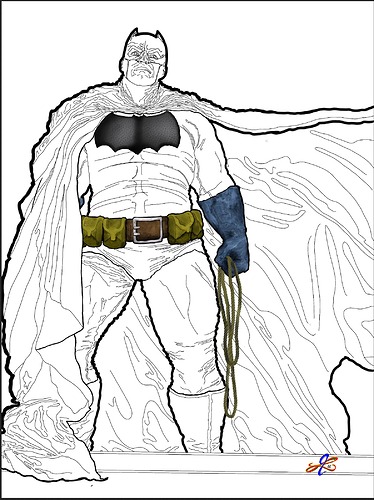 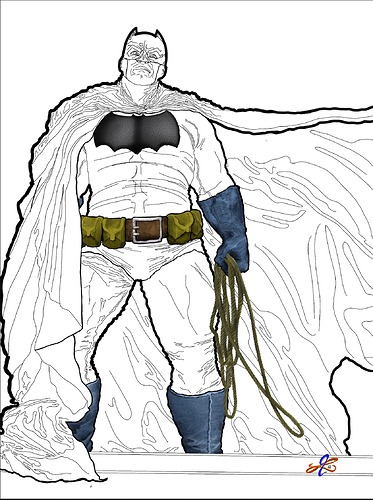 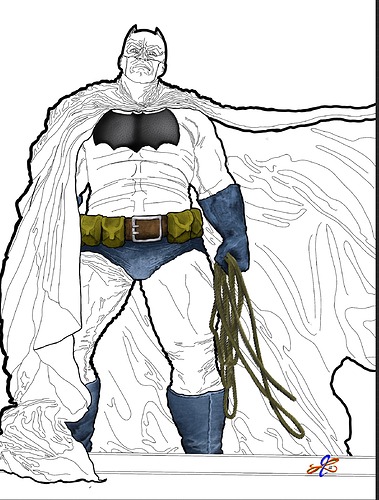 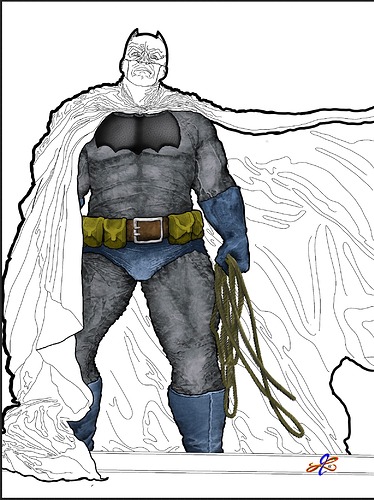 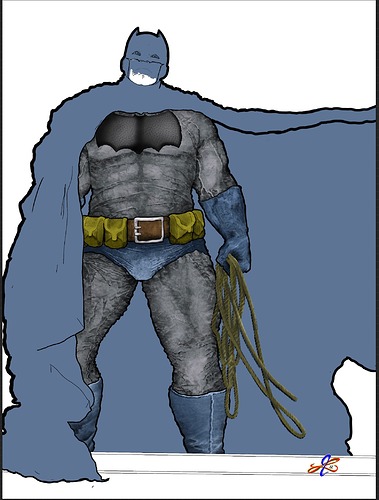 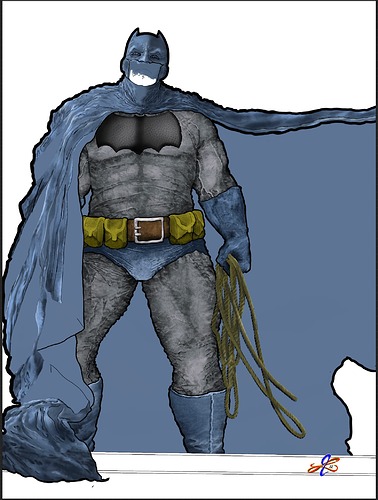 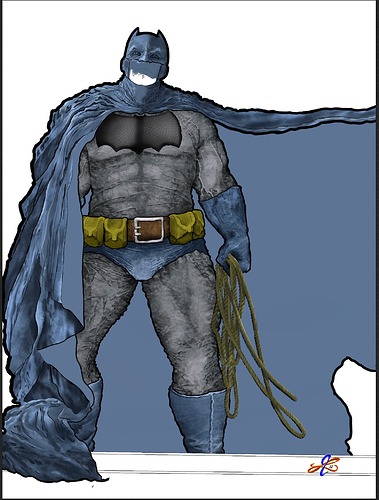 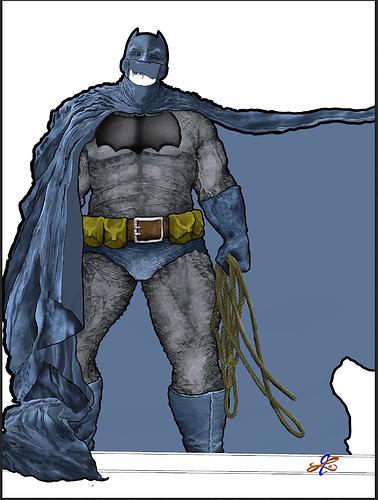 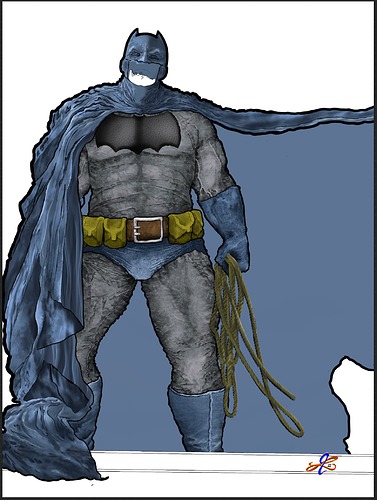 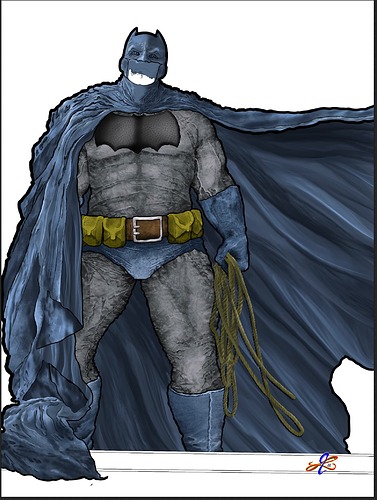 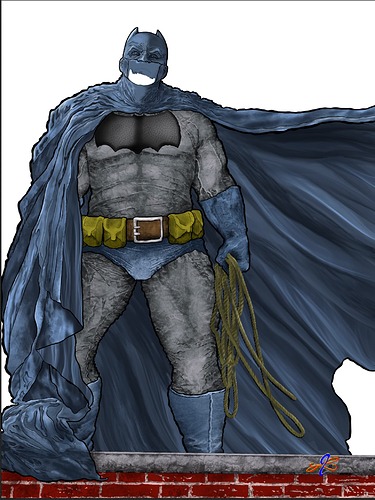 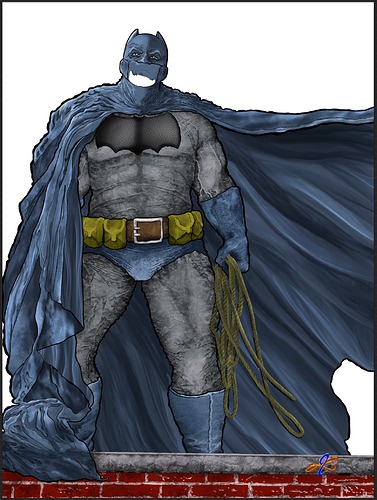 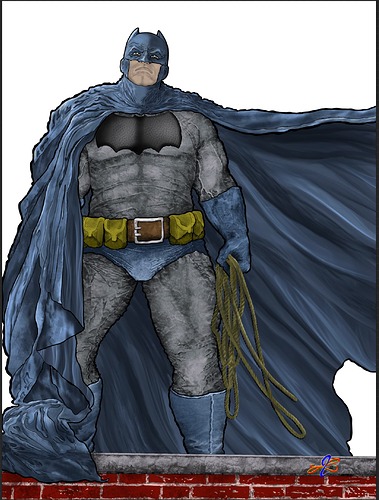 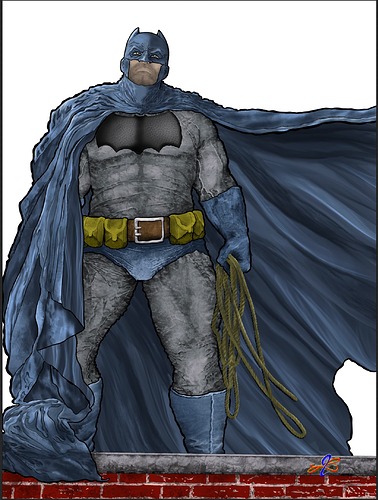 This is awesome, well done!!

This is SO good! The texturing on the suit and the Bat symbol are just fantastic–excellent work, as always!

Awe, thank you very much @Jitsu
I was hoping this was ok to put in the 90’s theme
I just remember the 90’s being so much Batman for me​

Looked through some 90s DC and decided on 90s Catwoman as that is my favorite Catwoman suit. So made a piece with her and some 90s geometrical background. Really like how it came out. Had fun with it. 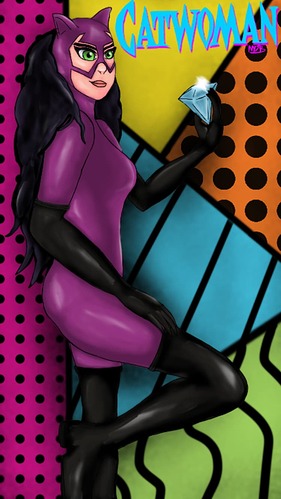 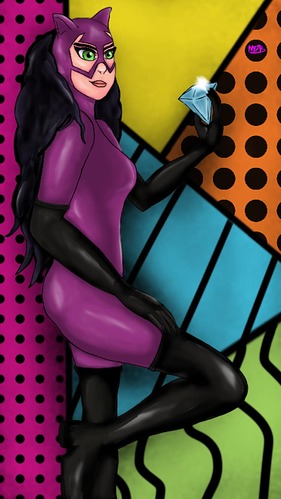 That looks super cool! I’ve always loved that suit on her. The background is super awesome, too.

Amazing details as always – loving the wrinkles on the cape, very fluid!

That background fits PERFECT for both this variation of her suit and the overall theme of the '90s. Not to mention that pose … that definitely reads as a '90s action-sitcom poster.