I was going to call this thread “not angry, just disappointed,” but thought it was too passive aggressive.

But I am feeling a little bent out of shape about the Swamp Thing news. I love this community, and those saying to be positive, etc., but if I can vent a bit, may give voice to those similarly bummed out.

Swamp Thing is my favorite comic, the Alan Moore run specifically, but love the Wrightson stuff as a old school horror comic fan. So of course I signed up for the show. But I subscribed at launch, voting with my dollar, saying this something I want, making sure that the service survived until Swampy aired.

It was a rough start, but I’d been through this with Filmstruck and now the Criterion Channel. Niche services need the support to survive. But what Filmstruck taught me was that the comglomerates don’t care about niche services. They’re trying to compete with Netflix & Disney+. So the rush is on to consolidate as much media as you possibly can. As the current zeitgeist in pop culture, superheroes are prime currency in these wars.

So, the truth is, it’s really easy to just tune out. I quit my job in the comic shop around three years ago, stopped reading big two books, but kept on the indie titles. Started buying more Eruo reprint collections. Dipped into manga more. I’ll still drop $20 a week at the LCS, never to Marvel, but DC was creeping back in there, in large part due to this service and Mister Miracle.

So, as somebody that was being won back, news like this takes back a good deal of that progress. Nothing will take away my love of comics, but nor am I going to wade through the crap when there’s a whole world of books out there. I still have Moebius, Pratt, Manara & Crepax to read. I still haven’t touched Tezuka yet. I just found Tillie Walden.

So I sympathize with the notion that screaming at the interwebs is unproductive and unhealthy. Don’t feed negativity into your passion. Find the positivity elsewhere. Superheroes are big business now. It’s driven me away before, and may do so again. But I’ll watch Swamp Thing out. Young Justice is coming. Not cancelling yet, but this dampens my passion quite a bit.

You all stay amazing. Don’t let company mergers and state politics ruin your day. Sorry to those who need to cancel, however. I do understand your choice.

Wonderfully written @DeadmanBrand - completely understand and agree. I see two positives that have come from this situation:

I also share in your sadness, but have hope for future depictions of this much loved hero. 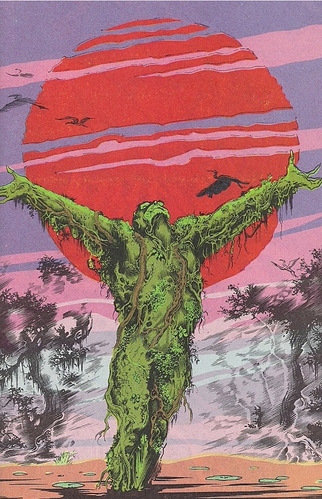