I don’t know if this fits into an existing thread because it’s not new products.
I recently mentioned having a Conduit figure in my office (elementary level school psychologist) and it made me think about what else is here. Toys are currently packed away because due to COVID it’s just hassle to constantly clean them but I dug out the bin and picked out the DC stuff. Some was donated but most of these are from childhood or early collecting days that I bought doubles of. Some Kenner, Mattel, Jack in the Box and McDonalds and BK kids meal toys, and others so it’s a real omniverse. 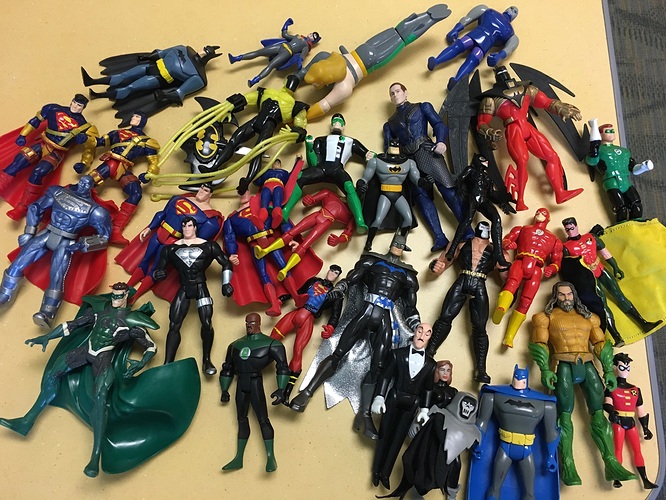 That Batman TAS figure between Kyle Rayner and Orm, that was from McDonald’s and it got the most milage of any toy I ever got from any fast food restaurant. I think I still have it somewhere. Mcdonald’s/Burger King/etc toys were always best when they were just figures. I hated how so many of them were like “Batman characters in cars!” or “Superman spring-loaded flying toy!” Just give me basic figures, that’s all I wanted.

Those Aquaman figures from 2018 feel out of place in a nostalgia picture, though.

Those Aquaman figures from 2018 feel out of place in a nostalgia picture, though

Definitely. Those I bought solely for the sharks they came with.

I also agree with the Happy Meal observation. The cars or other random stuff always get pushed to the side.

I had five of these.

Rock on @SWhite! Lessee, you have:

I used to have these. 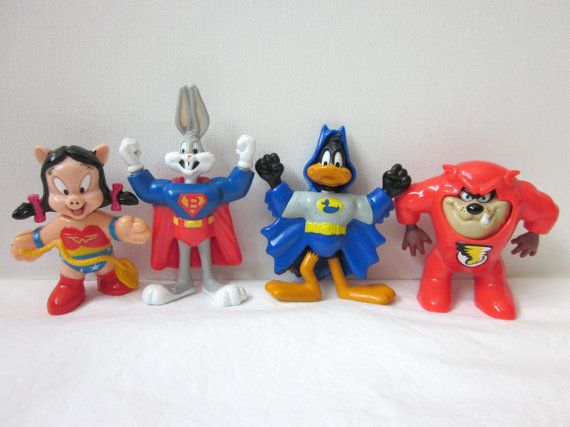 Those are somewhere in my parents’ attic. One day I will go up there and it will be a toy flashback.

Funko has made Pops that, I feel, are a slight homage to those McDonald’s toys of yesteryear.

all hail the the king LOL. 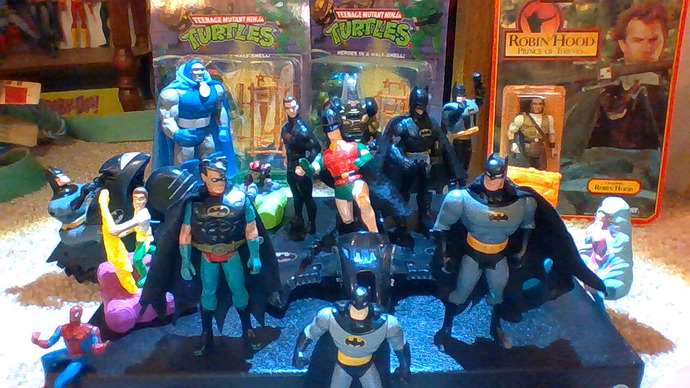 I totally forgot about these! I Know I had Taz and Bugs but not the other 2.

Is that a Hook Happy Meal toy on the left (the guy on the purple raft)?

I like how Robin yoinked Batman’s cowl for a turn in the Laser Cycle from the Batman Returns line. That’s b@!!$y.

Nice little stash you got there.

Nostalgia when it comes to toys for me:

My current DC collection started about 7 years ago, and it kicked off with a trip down Super Powers memory lane. In a short-ish period of time I was able to gather more than half the line, including the coveted Cyborg. Also got the Batmobile, Supermobile, Hall of Justice and the carrying case. Sold all but the Trinity and Clark Kent to finance my largest piece (no regrets). Sometimes I see pictures of complete Super Powers collections and I feel the urge to start back up, but space and money keep me from doing so. With the line’s popularity among my generation of collectors, I wonder why no company takes a flier on reviving the line with some reissues? It’s constantly done for Transformers and He-Man. Nonetheless, I’ve substituted my desire for the little guys with the current Spin Master line. They’ve got less character, but are charming pieces nonetheless. Hoping they continue releasing new characters so I can build a little Justice League army.

That Hunter’s Prey Superman has always caught my eye by the way. I keep dabbling with the idea of a Mattel/Kenner shelf of old Supes figures… but I fear with real estate at a premium, they’re gonna end up in a box.

Had a spare Wayne/Batman fig, thought it would be funny to deck robin out with some armor and throw those old cloth capes on the B:TAS fig.

Scooby Doo Pez and RC X-Wing in background on left.

In a short-ish period of time I was able to gather more than half the line, including the coveted Cyborg. Also got the Batmobile, Supermobile, Hall of Justice and the carrying case. Sold all but the Trinity and Clark Kent to finance my largest piece (no regrets).

You’ve got super stones to sell that much of a Kenner Super Powers collection and not have regrets about it.

The only Super Powers item I’ve sold was a carded Batman on a series two cardback (with the Clark Kent mail-in offer on the front). I got him in 2000 and sold him in 2012 when I went on a small break from collecting.

With the line’s popularity among my generation of collectors, I wonder why no company takes a flier on reviving the line with some reissues?

Given that Hasbro, who owns the Kenner trademarks, loves to indulge in posthumous fan service by slapping the Kenner logo on brands that Kenner either never had any involvement with (see the current 3.75" Marvel Legends figures) or things that came along after Hasbro shuttered Kenner in early 1999 (anything Star Wars-related from the Prequel Trilogy forward), I would love to see them do a revival of the Super Powers Collection.

You can bet your bet sweet bippy that I’d buy two of each reissue figure (one to open, one to keep carded)! Well…maybe two of Superman at least.

If Hasbro handled a Super Powers Collection reissue similar to how they’ve done their The Real Ghostbusters relaunch over the last year, I’d be happy (although, I’d like to see product release at a better pace than they’ve done for TRG).

Maybe we’ll get reissues for the 40th anniversary of Super Powers in 2024? One can hope. Just imagine if they released the Tower of Darkness playset!

I keep dabbling with the idea of a Mattel/Kenner shelf of old Supes figures… but I fear with real estate at a premium, they’re gonna end up in a box.

Your shelf space may be at a premium, but the prices on Kenner/Hasbro Superman figures are at anything but right now.

This is the time to pull the trigger and buy, as demand for Kenner/Hasbro era (1990-2003) DC toys is very low and if you shop around, you can very easily score most carded figures for not much more than retail.

For the figures that do sell for a smidge of a smidge more than retail, the prices are still very low when compared to what packaged figures from comparable non-Kenner lines of the era (especially from the early '90s) are going for.

Should you want to scratch that nostalgic itch, I heartily recommend Power Flight Superman from the Superman: Man of Steel line. He’d be a perfect addition to your Superman menagerie.

Oh the envy I have LOL.

I love those little Spin Master’s. Only have Bat’s, Damian, Joker, & Manbat but I would like to snag a few more I selfishly made a detour while at wally world 2 weeks ago and saw they had a gold suit batman and came real close to buying it. Would like to put him with my oldschool gold armor space fig from the pic above. I don’t know if I mentioned it to you but I’ve been playing around with clay sculpting along with a little CGI, wanting to either just sculpt my own piece or 3d render one then 3d print it, use it to make a mold and either melt down a bunch of old stainless nails I have from my construction days and cast a cool metal piece or make a silicone one like those seamless figs that people use to make custom figs, they’re called 33m or 34m or something like that.

Visiting my ancestral home (I just like calling it that) and still have so much here but this is the only thing easily photographed.
The rest of the HoJ, the Batmobile, Lex’s vehicle, and the Superman vehicle are all in a box somewhere. 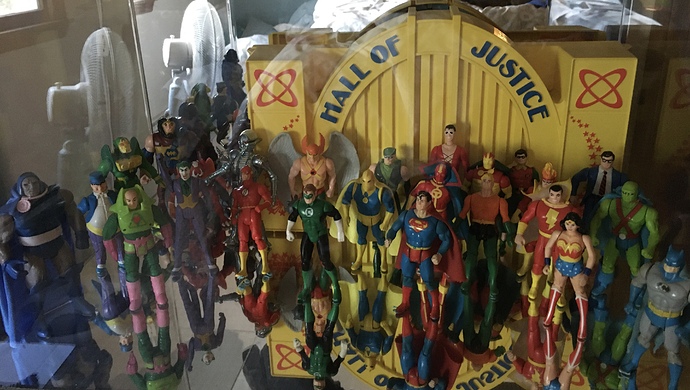