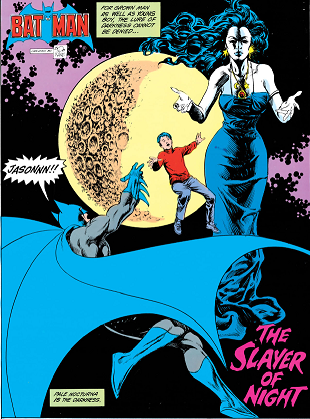 The Renegade Robins Club is no longer in Batman’s custody! Last week, Bruce discovered that the Child Welfare Bureau had taken Jason away from him, and now they’ve given the boy to Nocturna! Meanwhile, Thief of Night has rebranded himself as Night-Slayer and is set on revenge, as is Dr. Fang. On top of that, the Mad Hatter’s back!

There’s no way Jason could face this group of foes, right? 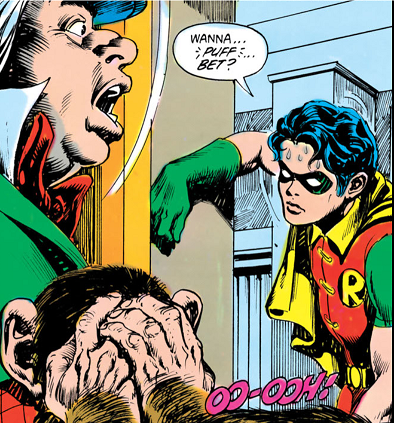 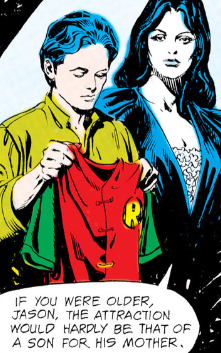 Should Jason embrace Natalia Knight as his new mommy?

Note: We should be completing the Doug Moench run in Week 9, and with that, we will begin our shift to the post-Crisis continuity. Technically, we will be in post-Crisis stories during Week 8, but the timeline reboot turns out to be a three-step process:

Also, I do want to apologize for an issue that will be plaguing us quite frequently for the next few months: DC Universe does not have all of the Bat/'Tec issues from the mid-to-late 1980s, and sometimes those missing issues will be part of a larger story arc. We will have to make do with what we have. (I will say that the issues that are here frequently fill in the gaps with redundant recaps and exposition, so the incomplete stories are not incomprehensible.)

Alright, first time here and haven’t read any previous issues, so jumping in…

I like Jason trying to take the initiative. I’m not sure how well thought it is is. I mean why would Nocturnal want him in her house of her could easily prove she was a villain. Even after she knows Batman is Bruce, she doesn’t take any further steps to hide who she is.

On that, I’m not sure how she knew Bruce was Batman, other than it’s night. And the love triangle really didn’t work for new. It’s like Nocturnal just jumped from strong man to strong man. And then her convictions for being righteous about Anton killing someone don’t seem to be as strong when she thinks she has killed him. She got over that betrayal of the night real fast.

Mad Hatter of course. But Alice in Wonderland is one of my favorite books.

There was a resolution? I admit I didn’t read super closely at some points, did anything happen sheet they dumped his body?

I feel like if Batman has always had clean shaven face, on really the only identifiable part of his body, a red goatee would be a give away. Also very coincidental that the body type was the same. One of the things I liked about when Grayson takes over as Bat man is that most people who interacted with him knew right away he was a different Batman.

All in all though… I like seeing Jason’s enthusiasm on display. As well as his headstrong belief in showing how he can help Batman and recognition that he has a lot still to learn.

I feel like if Batman has always had clean shaven face, on really the only identifiable part of his body, a red goatee would be a give away.

True, but that never stopped Hugo Strange (another bearded villain with a propensity for impersonating Batman). The fact of the matter is that most people don’t get a good look at the REAL Batman, so they’re less likely to recognize a false one. And it’s not as if Batman is incapable of growing a beard, so who are they to judge? We as the readers have the advantage of knowing exactly what Batman is supposed to look like. If Gordon or Bullock make the mistake (assuming that the villain isn’t whisking by on a motorcycle), that’s one thing, but the average Gothamite isn’t going to be as wise to these things as we are.

Totally true. He did come across as a loon. I mean whose first thought when they see someone shot in the head is I’m going to switch outfits with them and think that’s a great plan.

Also, I’m unsure of what his endgame was. He didn’t seem to need or want any of the riches. Was it just to frame Batman for some crimes? that seems like a really bad plan as well, when he knows the real Batman is out there whether or not he’s lost his mind.

On a side note, Night-Slayer is one of the character names used by Sunsoft in the Batman NES manual. 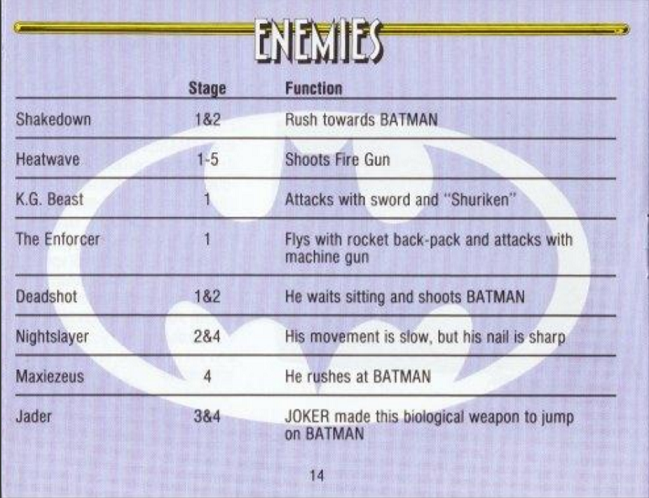 Granted, the resemblance is, uh…nonexistent. 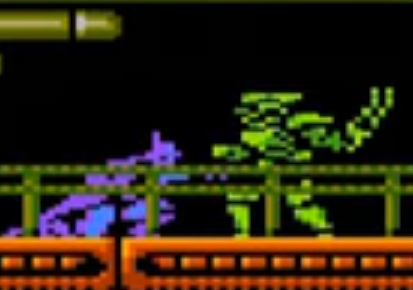 That’s hilarious. Although would an 8-bit Nightslayer look much different from an 8-bit batman if you stayed true to the character design?

I also love that K.G. Beast attacks with a sword and shuriken. That is exactly how he is depicted in the comics… Right?

And Maxie Zeus he just “rushes” at Batman? What does that mean? Is he just a normal dude?

Yeah, he was a complete loon to begin with but then he got even more bonkers here.

I also love that K.G. Beast attacks with a sword and shuriken. That is exactly how he is depicted in the comics… Right?

Well, we’ll find out soon enough. Ten Nights of the Beast is a Jason Todd joint, after all. 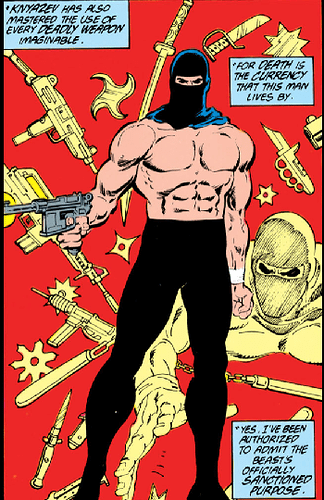 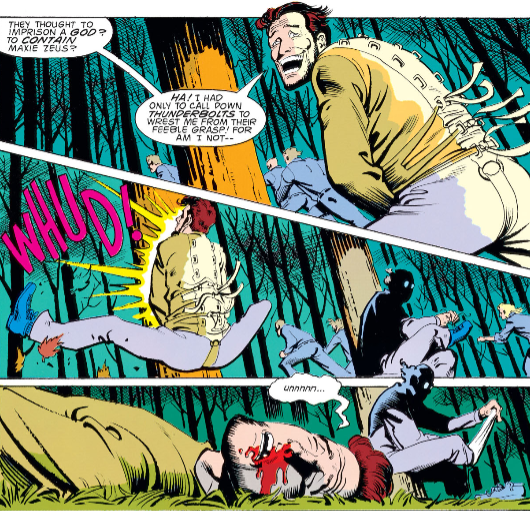 Poor Maxie. He can never catch a break.

I did not know this about KG Beast. Doesn’t seem the character for it. But then again I’m only familiar with the beast from mid-90s onwards.

In all fairness, I totally cherry-picked that exact panel just because it’s the one time he kinda resembles his video game counterpart.

Poor dude was just minding his own business, Batman! As was Maxie Zeus:

This is the sort of abusive behavior we get from a Batman without a Robin.

I assume you mean the way he proved Nocturna’s criminality? It was interesting in terms of playing a long game with Nocturna, though it kind of back-fires on him due to him liking her enough that he almost doesn’t want to incriminate her. If fate hadn’t intervened with the CPS officer seeing her with “Night-Slayer,” who knows what could have happened?

It’s hard to like a triangle when one of the angles is so dull it might as well be a smooth edge. Nocturna’s interesting enough – in a lot of ways she has a lot in common with Catwoman but has just enough difference to do something unique, but Night Slayer is totally blah.

I’d say Mad Hatter was the most fun villain to read, though it was interesting to see Hill and his downfall. This take on him has been interesting, considering previously I only knew the character from the animated series, where he’s more of a standard-issue crooked politician.

I liked it well enough. Fang always felt like a C-level adversary at best, so it was a fitting end, one that propelled a more interesting plot point forward.

I can’t think of many other “villain dressed as Batman” stories off the top of my head, so…pretty good, I suppose. I suppose there’s the “Three Ghosts of Batman” story from Morrison’s run. I think I would tip it over to Morrison more.

Hugo Strange does it fairly often. In fact, he does it in Batman Annual #10, which we would be including in our pre-Crisis Jason Todd read-through if only someone in charge at DCU would upload the comic here from this digital trade…

Oh man, how did I forget Hugo! I guess you can count Prey and Batman & The Monster Men, though I don’t remember his dressing up as Batman playing a role as an actual frame-up there.

And now that I think about it…Moench wrote Prey as well! It’s interesting, doing this club has really made me appreciate him more as one of the great Batman writers.

Yeah. Too bad that my club can’t do anything from his run with Kelley Jones, but maybe someone else can.

Oh, and Batman #183 is a classic Silver Age story with an impostor Batman. The cover is especially iconic for its campy meta-ness. 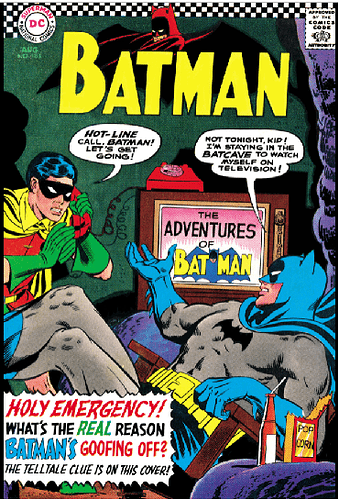