Stopped by my local Half Price Books and found some neat Superman goodies. First I got The Superman Gallery #1 from 1993. 34 pages of Supes pin-ups from his earliest days to the then present day. Some really wonderful art that I’d not seen before. This included Jerry Ordway’s “Superman At War 1990” artwork. Ah, just a gorgeous picture, I suggest you google it. Next up is a "Secret Origins: The GOLDEN-AGE #1. Here we have a modern re-telling of Superman’s original story from Action Comics #1. I never knew this existed and I’m super stoked that I now do!

Also found Superman: Secret Identity #2 & Adventures of Superman #505. All in very good-near mint condition and all together less than $10!

Needless to say, I’m extremely thrilled with my loot. 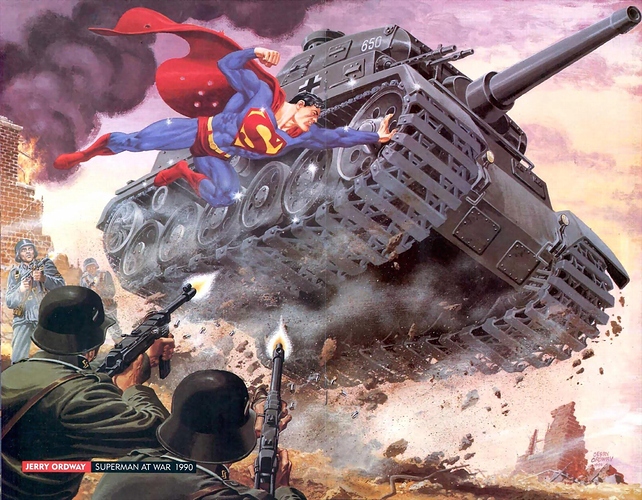 Dude Nice! last week I got Issue #1 of the JL 87 run I know its not super valuable but I love JL and that run. Also in great condition.

It’s not financially valuable, but it’s a damn awesome key ish. I found mine about 3yrs ago and I treasure it.

Yeah I lost everything in a flood back in 2011 then the rest in 2015 from a house fire. My dad was a huge comic and trek nerd and I had 7 of the white comic boxes that were filled with comics going back to the 60’s my Dad was a great collector and kept them in mint condition and usually always got 2 of every 1st issue. Even Had Spider Man’s from the 60’s.

broke my heart when I lost them. afterwords I started getting everything on digital probably spent over a $1000 + but I totally regret it its not the same as having the hard copy. started buying hard copies again last year.

Hey neat! I 'member HPB. I bought a bunch of the single issues of Hush there years ago.

Oh Aqua reading that made my heart hurt, my friend. Thats horrible and I’m so sorry that happened to you and your family. That happened in New Jersey correct? Anyway I can somewhat relate. 10yrs ago my severance package from the job I’d been laid off from the previous year was running out. Then on the week of my birthday my nut job girlfriend (ex now) totaled my truck leaving us both without wheels. I had to sell off my comics and collectables just to make rent, eat etc. Sadly I got gyp’ed for the most part and sold my collections for far less than it’s true worth. Anyway 4 years ago I was finally back in a place where I could start collecting again and I’m happy to say that as of today I’ve rebuilt things back up solidly.
I dunnno if you’ve ever been to mycomicshop.com . If you havent go check it out they have thousands of back issues from every age and their prices are usually very reasonable. I’d say at least half of my new collection has come from them.

@DCComicsCrisis, thank you for your kind words. I’m glad your collection is building back up :). No I haven’t checked out mycomicshop.com I will def do that thank you!
It was in N.C. then what I had left at my Ma’s in M.I. got burned.
@Vroom, Whats HPB?

@Aquamon The abbreviation for Half Price Books.

Oh thanks I didn’t know about that one either. Not very familiar with online sources.

They have stores all over the country too. Stop in one when you’ve the chance. They’re fun!

@Aquamon: Man that sucks. I also lost parts of my collection due to flooding in '93 and to some long boxes getting lost in a move. I feel for you especially given the age of your collection.

Mine was mainly made up of books from the '80s but a part of my collection included books that once belonged to an uncle of mine. They were from the 60’s and though they weren’t in good condition they held sentimental value to me. They were my gateway into comics and something that connected me to this uncle whom I had never been able to meet.