New US Congressman To Swear Oath of Office on Superman #1 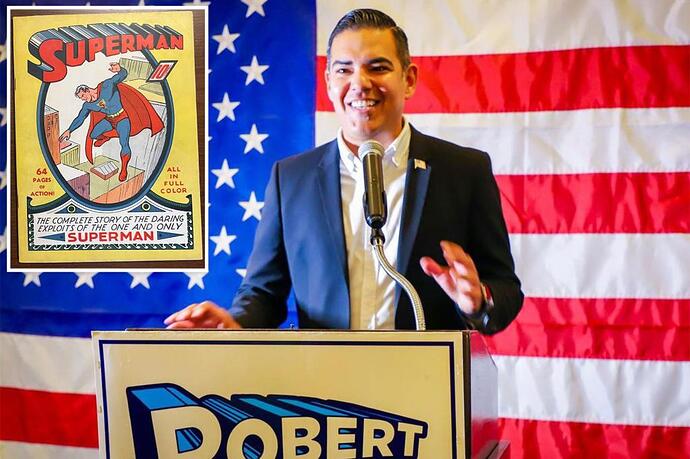 Rep.-elect Robert Garcia will hold the rare graphic novel, a copy of the founding document, a photo of his late parents and his citizenship certificate as he takes the congressional oath.

Well, it IS a sacred text. For a lawmaker, Truth, Justice and the American way kind of nails it.

“For all of you upset that I still read comics and suggesting that I need to do more serious reading……um…….anyone who understands comics knows that comics are an essential part of American fiction. And the lessons learned are invaluable. It’s serious s—,” he tweeted in November.

My thoughts on this article went from “Well, that’s interesting” to “Aaaw” to “Alright, I’m down for it, yupyup.”

This is pretty cool too:

“Congressman Garcia learned to read and write in English by reading Superman comics so it’s especially exciting he was able to borrow this rare copy from the kind folks at the Library of Congress,” Guerrero added.

And kind of heart-warming

Rep.-elect Robert Garcia (D-Calif.) will hold items he holds dearest to him as he takes the congressional oath.

@Vroom Any particular thoughts on this tidbit of news?

…if a Speaker ever gets elected…

In 1855 it took two months and 133 ballots to get a Speaker and 135 separate Congressmen got votes.

@Vroom Any particular thoughts on this tidbit of news

The New York Post needs to understand the difference between a “comic book” and a “graphic novel”.

Superman v1 #1 is, to twist Tom Servo’s words around, “A comic book. Not a graphic novel.”

pushes up glasses, Reeve-style, then takes a deep breath

As Cereal Killer (played by Matthew Lillard) said in the movie Hackers, “That had to be done.”

With that bit of goofy, playful, nerdish behavior out of the way (it bears repeating that Superman v1 #1 is a comic book though and not a graphic novel), I think its cool that One of Us (a fan) is in Congress.

I hope that they do what every real politician should strive for: Put the needs of others before their own, do what’s best and most beneficial for the people at large and serve their respective office in the utmost moral, true and worthwhile way they possibly can.

Of course, many politicians (no matter their party) are self-centered, ignorant pricks who are only concerned with what’s good for them and their party, unfortunately.

I certainly hope Mr. Garcia does what Superman would do: Stand for what’s right, help as many people as he can in as many ways as he can and always puts others before himself.

I really hate it when they call comics “graphic novels.” It just sounds pretentious.

One episode of MST3K has Servo constantly correcting Joel when he says “comic book” or “comic books”.

“They’re graphic novels!” he says to Joel and Crow.

“No, those are comic books. Graphic novels are something else.” I say to Mr. Servo.

I read somewhere that the Library of Congress has the largest comic book collection in the world, so it’s cool they have a copy ready to go.