[New to DCU/World of Wonder] Wonder Woman: The Just War 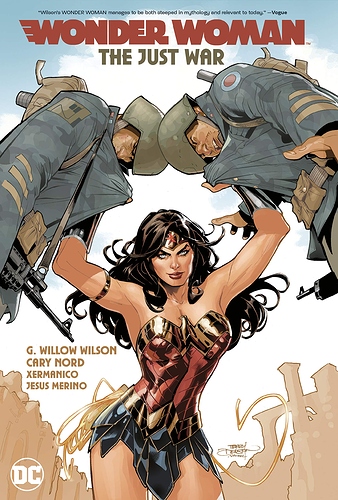 1732×2560 586 KB
Hey everyone! Welcome to our humble abode!! I want to say thank you for everyone from the World of Wonder to come and celebrating some wonderful female characters. For those who don’t know this club is for those who WANT to get into current comics that are just arriving on DCU, so we are reading Wonder Woman: The Just War! If you want to read more recent stuff, we are also reading Nightwing: Night Terrors.

Want to join the [New to DCU] club for an exclusive ever-changing flair, notifications, AND early access to reading orders? Join the club by clicking this link: DC Community
Go join World of Wonder too!: DC Community

I don’t remember if I finished this arc when it was being published.

I’m ready to dive back into this story by G. Willow Wilson.

is this a book club crossover thing? or more of a happy accident?

Ironic. I was rereading these for fun. Woot!

Yeah, I was reading the issues for these as they came out. If I’m not finished with that arc already, I’m pretty darn close.

Okay, I’ve read up to 62. will read the rest and come on back

Is this your first time reading Wonder Woman: Just War

The whole issue featuring the 3 mythological fish out of water creatures was absolutely delightful! Seriously. Now I want a series starting just them.

Is there a right side in war?

Depends on the war. There certainly was in WWII.

How does Wonder Woman draw parallels to the wars in the Middle East, and what is Willow saying about them?

Man, I don’t wanna get all political, but wars in the Middle East have never stopped. Ever. I got no solution there…was Willow saying we should just leave it to them?

How do you feel about the Steve Trevor Story Line

Most times I’ve seen Steve Trever, he ends up playing the fellow in distress. No different here, and I’m okay with that.

What make Ares compelling as a villain?

His pure ruthlessness and inability to be stopped coupled with actual philosophical thoughts.His

What do you think defines a good wonder woman story, and does this story

Man, you’re bringing on the deep questions this week!

I don’t think there is any one thing, though. Like any icon, she can be adapted into varied stories and situations. This isn’t the first time we’ve seen her have to deal with gods and goddesses stuck in Earth, but I liked it.

Should we keep reading the series?

I would like to…I was surprised there’s a couple of no votes up there.

I had recently read the first portion of Just War, and finished with the latest three issues this week. I would definitely like to keep reading this series with the club as I’ve finally caught up with it having started here in DCU. As for a Just War, there’s a long philosophical history exploring this idea from sources as diverse as St. Augustine, the Koran, and Confucius. St. Thomas Aquinas which can be simplified into 1) waged by a just authority, 2) waged for just reasons in a just way, 3) peace must be the central motive. What Wilson does well in this story is explore the idea that even in a Just War, injustice occurs, innocents are harmed. It is the nature of war. As for a right side. I think one has to be willfully blind not to see the right side in some conflicts (Civil War, WWII). It’s much harder in the conflicts Wilson appears to be mirroring. There is a right and a wrong side, but is prolonging that conflict worth the damage it causes.
I think Willow handles Steve well. He’s a human playing on the level of Gods. Dude is gonna get hurt.
Having just read the final three issues, I very much enjoy this bridge between the Just War and the coming story. The fish out of water refugees brought both a comic relief and a light on refugee. Although that the bull turns out to be a girl, is confusing to me. 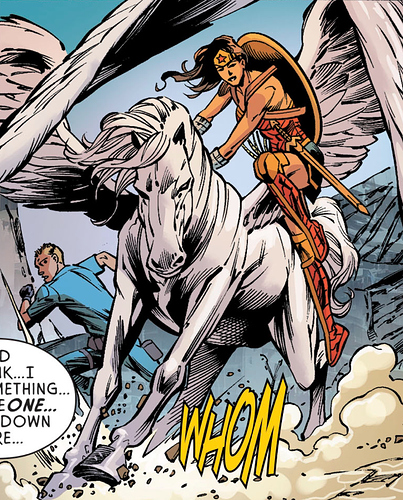 Cale’s plot is an interesting and was nice to begin with, then took a very nice left turn. 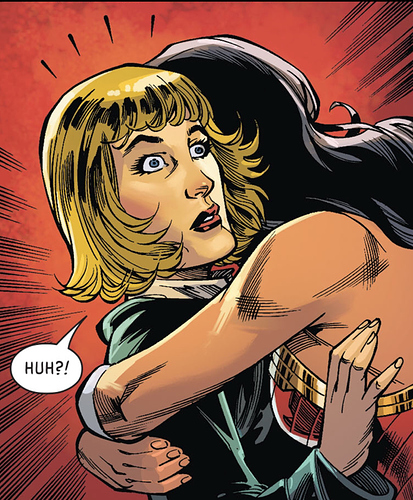 Is this your first time reading Wonder Woman: Just War?

I was reading the issues as they came out on DCU though I was behind a couple of issues by the time this popped up.

I think I’ll go with how Diana handles Ares and Veronica Cale. I think one of the best things about Wonder Woman as a character is that since she is ultimately a character of peace, she will try to resolve a situation through dialogue and understanding before with the fist or sword.

Also, I really liked what was hinted at with the end of these issues in Diana’s mission with Aphrodite to get back to Themyskira. I always thought the whole “Diana can never go home” thing established in Rucka’s Rebirth run was a terrible decision, and I appreciate that G. Willow Wilson is going to finally open up that realm of storytelling back to the character.

Is there a right side in war?

This is one I kind of wrestle with, but I’m going to say 9 times out of 10 there isn’t. Even if there is a situation where war becomes necessary, I think history shows that if it is, then terrible mistakes have happened to get there.

How does Wonder Woman draw parallels to the wars in the Middle East, and what is Willow saying about them?

That they’re messy, muddied, long-lasting and really only good at displacing the people that live there and satisfying the ambiguous morals of outside forces that often instigate or fan the flames of them.

How do you feel about the Steve Trevor Story Line?

I think he has a pretty good part in the first half, I liked how he interacted with Aphrodite throughout as well as helped out the pegasus and the other animals.

What makes Ares compelling as a villain?

I think what makes him compelling is that he’s almost as much as an abstract constant that Diana has to deal with as much as a physical super-villain. Whether it’s him giving her mission in Post-Crisis, or being an adversarial mentor in the New 52, their relationship is far messier than simply “I must stop you, villain!”

What do you think defines a good wonder woman story, and does this story apply?

I’ll put a list of attributes of a good Wonder Woman story. I don’t know if ALL of them need to be there, but a good number should:

Overall, I think this story ticks off enough spaces that I think it applies as a Good Wonder Woman Story.

This is my first time reading Just War.

Favorite Moment?
I like the reveal that the destruction of Olympus was caused by the death of Ayres while he was imprisoned. The struggle Wonder Woman had against the poison to keep from being consumed by revenge. That was a nice touch.

Is there a right side in war?
Sometimes war is a necessary evil.
There are some bad people out there.

This story draws a parallel to the war in the Middle East in that it points out that super powers are propping up leaders that are not caring for the people of their nation. This is happening a lot on both sides of the battlefield. What is Willow saying about them? We should always be working towards peace. Looking around the world, I don’t think that is always the case. Afghanistan was a very long war.

Steve Trevor
I think she used him well in this story. He was active in the story and had some good moments. I don’t want him to end up being the doting lover waiting for his hero to come home though. I don’t really care to see that storyline develop.

What makes Ayres a compelling villain?
He’s a god. Hard to get much badder than that. I haven’t read many Wonder Woman stories and Ayres is one of her biggest baddies. A god of war is a worthy foe for Wonder Woman.

I like where this is going. Searching the world and meeting more of the gods. We should keep reading.

I am caught up, just haven’t made time to dive into the discussion.

While not into WonderTrev, the depiction of their relationship was done well for me. Steve’s comment of someone causing a lot of property damage just to find him has a lot of layers for me.