So let’s talk about Hawkman: Awakening

Our flair this week: 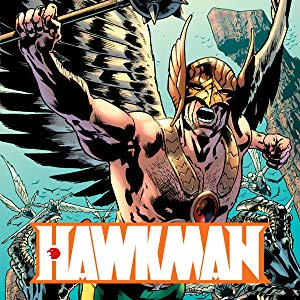 Glad to see this club back!

I enjoyed this immensely. I remember hearing about how good this series was when it came out, but other than during Geoff John’s JSA I haven’t ever read Hawkman, so didn’t pick it up.

So yes… First time reading this.

Are we talking about the Gorilla God with wings… freaking awesome. Or is it some other thing.

I don’t think I ever knew Ray and Carter were good pals. I like how it was presented here and enjoyed the comradery. Is there microverse God planet a call back to another DC appearance? Am I the only who had vibes of Star Trek V?

I don’t think it changes my perspective on Hawkman too much. I know he has had a convoluted past, but mostly has had to do with reincarnation, and this seems to be an expansion of that.

Like I said… I enjoyed this series. It is an interesting take on Hawkman. Most of the time when I’ve read stories with him in them he is portrayed as a tank like character, a front line fighter, or bruiser. So a take on him where he is solving mysteries and expressing how he wants to avoid fighting is new, at least to me.

@Meisaj I’m really glad you enjoyed it. I think part of what Venditti does so well is make Hawkman (a character that is super convoluted) interesting and fun. The fact that there are Kyrptonian Hawkman’s is just interesting. The mystery element let’s us discover this character in a way that is accessible, but also leans into who Carter and Hawkman are as a whole.

The Atom appears in the series

The Hawkman Atom team up goes back to the 1960s.

Is this your first time reading Hawkman: Awakening?

Yep, and I flew through the pages, I was that much into it.

Bit of a hard one, but I think I’ll go with the chase between Kator Hol and Carter on Thanagar, and how they ended up connecting and helping each other. Second closest might be Ray pulling a Giant Man in the Microverse.

How did you feel about THAT reveal in the first issue.

At first I was a little apprehensive – several creators have tried to take away or mess with the retcon that Johns made that reasonably explained Hawkman’s convoluted history that I was worried about someone trying to make their mark on it yet again, but I think Venditti did a good job at keeping what works about it and expanding upon it.

How was the Microverse stuff?

The big planet fighting stuff was fun, but I think what was most enjoyable about those issues was Carter’s interactions and friendship with Ray.

How does this arc change your perspective of who Hawkman is.

I don’t know if it changed my perspective so much as expanded on it. From what I remember of the Johns series, and other stories with him, I mostly know him as “angry hairy guy who beats things with mace.” This Hawkman could throw down, don’t get it twisted, but he had some good moments of calm and non-bloodthirsty-ness.

Hi Nathan where are we at with this club? Nice work on your Global all-encompassing Wiki on 5G by the way.

ANYONE CAN UPDATE THIS. But please only add links and don’t add anything to 5G basics or 5G reading order. I am curating those - Nathan! The second thing is if I linked your post, could you put a hyperlink at the bottom of it title 5G Master Page. It will increase visibility of everyone’s posts! 5G Basics What is 5G? Details regarding DC’s Generations Every Current Rumor about 5G The New DC Timeline Every 5G Story (So Far) Explained 5G Discussions DC’s Proposed 5G initiative What Are Your …

@Don-El I posted the Nightwing reading. I forgot to send out a reminder though.