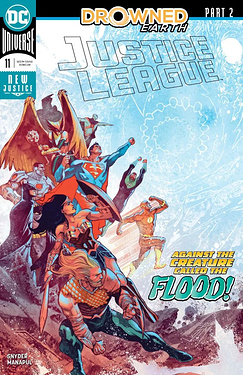 There’s a lot of list here. I strongly recommend that you read the prelude and then the Drowned Earth main story. Then read Justice League #13. I posted the event with Tie-ins. Let me know if you want more time to read this so I can provide it.

This weeks flair is

I haven’t read this one yet and I actually have it in trade, so I’m definitely glad to have this as an excuse to get through it.

@Nathan.Payson , is the voting button for the last discussion question?

Just reading the first couple of issues so far, and while we haven’t gotten a lot of Luthor and The Batman Who Laughs, I do enjoy Joker’s take on Luthor having BWL “trapped” there. It’s weird when The Joker is almost the most rational person in the room.

@Don-El Nope! This time the poll is did you like the event!

Is this your first time reading Justice League/Aquaman : Drowned Earth

Yes it was. I fell behind on JL around this time and was looking forward to catching up this series on here.

When Manta says that Aquaman’s ability to talk to fish can’t help him now, and he says something like, “Well, it’s a good thing EVERYONE is a fish now, isn’t it?”

How do you feel about the Blood reef and Graveyard of Gods?

They’re interesting ideas, especially the idea of a place where gods go when they die, but sadly I think with the fast pace of the story I don’t think I really got a good idea of what they are.

Which tie in was the strongest?

I think the first Aquaman issue, where Mera is trying to save Atlantis was the strongest one. I also liked Titans, which did a good job not only tying into Drowned Earth, but other stories like Nightwing being shot and Heroes in Crisis.

Man, these events are always rough on Titans, aren’t they?

How did the new forces compare to the first 2?

They’re…okay. They work for the story being told, but they feel far more basic magical mcguffen magical forces than the Ultraviolet Spectrum and the Still Force, which are probably just as unexplained.

The beginning of Smaller Characters Week 1 will start later today!

Is this your first time reading Justice League/Aquaman : Drowned Earth

I’ve read part of it, but this is my first time reading through the whole enchilada.

I liked how Aquaman-centric it was, and the moment Poseidon rammed the trident through him was nice and surprising, but I really enjoyed Lex/Batman who sighs and Lex/Joker.

How do you feel about the Blood reef and Graveyard of Gods?

The Graveyard was interesting. That could be used again in future stories of they have a hankering.

How did you feel about the Batman who Laughs vs. Luthor Dynamic in Justice League #8

That was so entertaining. The Batman who Laughs is more evil and a bigger genius than Luthor can imagine. Joker gets it.

Which tie in was the strongest?

I didn’t read 'em this time…I’m too lazy to search.

How did the new forces compare to the first 2.

They’re just there. Nothing to call home about, really.