I suspect many read the book club threads with interest but don’t comment, and maybe even read a book or two.

2nd… things will pick up in Community everywhere after Labor Day.

Hmm it looks like Human Defense Corps 6, (like 5 the week before) didn’t get added to the service. Do you know what’s going on @applejack?

Thanks as always for all the hard work. Looking forward to reading the Damage annual and The Terrifics.

Love the Terrifics, the one good thing in my opinion out of the whole Hero series.

on the bright side Nathan since I took last week off going to Chicago for the DCU reunion, I’m kind of behind on the new comucs, so if you take a week off I’m okay with it.

Thank you for your dcu book club and updates, i’ve been a long time reader but first time really replying or giving thanks. I feel there are more people in my situation who are thankful for you and new subscribers who would be grateful that your updates are at least archived and cataloged.

I always read this each week

Lot’s more going on here than over in Superman #2…Love the scene of Clark with the drunken wake for Yogurt.

Finding out the other reporter is a plant is cool. Her wanting kryptonite is not cool.

The appearance of Lois at the end in disguise is shocking!! First Superman thought: uh, thought we were a happily married couple, why would you do this???

Wow, still not sure what this Strength Force thing is all about, or how both Flash and Trickster can have it, but I am greatly enjoying the revealing of Commander Cold’s background.

He’s kind of like the Punisher apparently, all about doing the greater good thing and not worrying about collateral damage, kind of the approach an army at times has to take, like some of the civil war battles.

I’m eager to dig into The Terrifics #6 and 7 tomorrow; I had read up to #5 in the Superman Walmart Giants

There, I’m finally caught up on the Terrifics! Thanks for the reminder with this thread, Nathan!

Issues 5 and 6 use a lot of the technique of on one page four panels tell four different stories, and then you flip the page and 4 panels continue to tell 4 separare storylines. It works okay and there’s some fun stuff I might post here in a second. But …you can definitely tell one writer dominates more than another at times (so Jeff Lemire kind of disappears for big parts of the story I’m thinking) and frankly I’m still scratching my head over trying to figure out the whole Orb of Ra / elemental dimension storyline, in what all these little worlds were where everybody in the Terrifics was in. Why is Mr. Terrific seeing his dead lover, well metamorpho and phantom girl or being attacked by different armies… it just didn’t make sense why that happened.

Love having an Element Doggie in the team now. Unfortunately it doesn’t make an awful lot of sense why he’s an elemental dog, why he wasn’t cured with everybody else in that Michigan town, or why he’s immediately loyal and happy with the Terrifics. Anyone who’s had dogs before, especially dogs that had a previous owner for a while, are well-aware that there could have been a whole several issue storyline in the background featuring how the dog eventually accepts theTerrifics as his new family. But that didn’t happen here, it’s just mixed in as part of the wild plot ramp that is obviously the main raison d’etre of the series for now, with things like character development and plot connection to the main characters being way in the background.

But with the terrific series we get do get two of my favorite characters, Metamorpho and a version of Phantom Girl, along with the intriguing world of Alan Moore’s Tom Strong. The other characters that can be good depending on the storyline and writer. Mister Terrific and Plastic Man can work well in teams, and so far they are here. 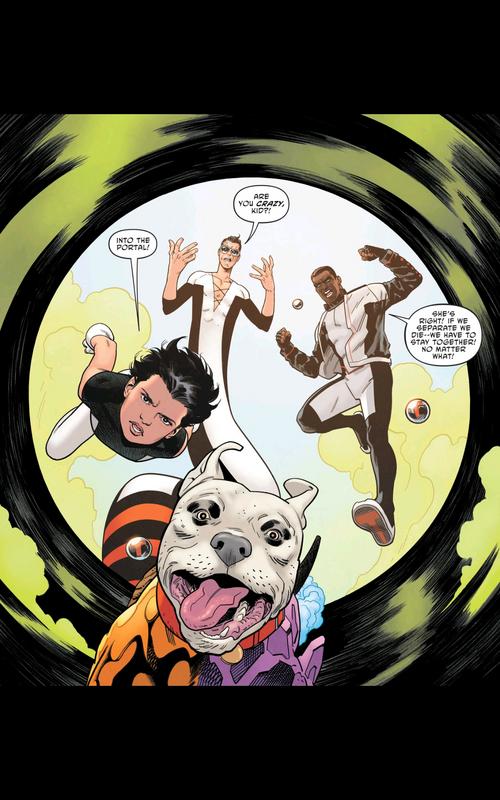 I should read Terrifics. Think Nightwing: Bleeding Edge is my next read though.(#44-49)

Finally before the new digitized Comics arrive tomorrow completed my run with Detective 987.

I would just call this an okay series so far. there are intriguing mysteries like where the helmet came from and who this lady with the eye that has a horrible killer beam came from.

So far the only cast member that Scott and shine besides Batman is Black Lightning. Guess we’ll see where it goes!