Are you New to DC Comics? Do you want to catch up with current comics that come to DC Universe Infinite every week, or discuss the new comics coming to DCUI every week? Join New to DCU Book Club!!

If you aren’t caught up on current comics or want to reread them, the New to DCU Book Club will be having weekly book club discussions of comics releasing to DC Universe Infinite from Tynion’s Batman run to Scott Snyder’s big event comic Death Metal to black label books like Rorschach. If you don’t know the context, each week will include context guides (What you should know going in) to help aid you and make the experience more accessible.

We are going to be Reading almost everything in this reading order AND some additional stuff kicking it off with the Road to Joker War and Early Death Metal. Before looking at some great smaller series. We plan to read almost everything important to Future State and Infinite Frontier (when they arrive) so you can learn everything you wanted to know. Here is the reading order:

The current era of DC comics is coming to a close which begs the question, what's next? What does the future look like, and what order should I read it in? Well, we are still figuring some stuff out, but here's the current reading order.Note: Red...

To give a sense of the week by week reading, look at an example: 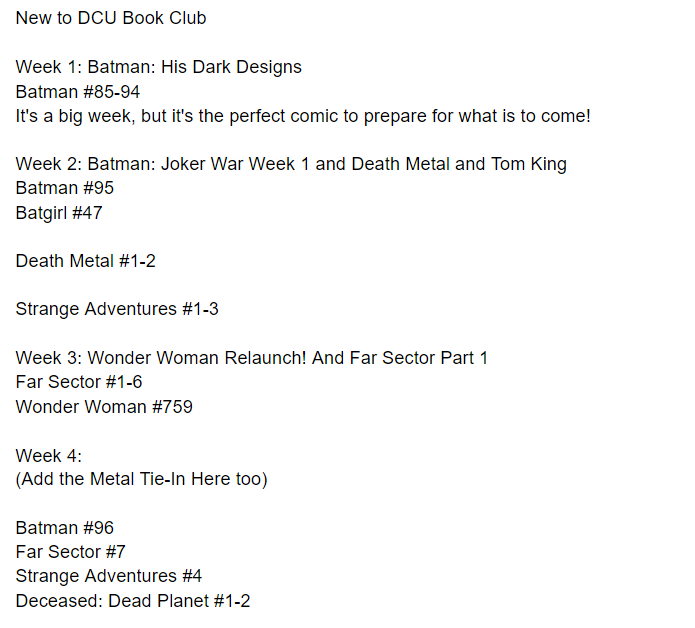 Basically, the goal is to spend time “Catching up” on a couple of books while we begin to read comics (mostly) when they join the service. The Goal is 5-7 stories a week with the exception of shorter digital-only stories. Currently with the following series in mind to be read:

Where do I find the suggested new digitized Comics discussed?

@Don-El The old format is returning likely during week 9. I want to start accessible!

Hey Im brand new to dc in general should I join? Or should I catch up on more comics Ive read watchmen 12 issues and The first couple rebirth comics and thats it

@J.Millan Your the target audience!! The goal is to get you all the continuity you need to read comics as they drop onto the service. Make sure to read the primer when they come out for any info that is implied but not stated!

Is this club still active? I am just exploring the club directory.

I have a book club read for next week. It hasn’t had anything this month… Which is my fault, but we are reading JLO starting Monday.

@Nathan.Payson Awesome! I am in. Will you be posting something on Monday? Thank you for getting back to me! It’s all good.

Thank you for the reading order.

Of course. Unfortunately for forum readers, my reading orders have moved to Comic Book Herald, but that doesn’t mean I’m not still working as hard as I can to make them for people!!