This week, we are reading 5 different books. Of course, you can read as many or as few as you want. This is just a way to talk about the various DCU series!!

Detective Comics #983
Spinning off of Justice: No Justice, Batman is creating the Outsiders. Introducing the Signal, Black Lightning, and Cassandra Cain along with a new villain, this series should be cool. This is also the start of a new run on the series.

Man of Steel #5
Rogal Zar and Superman continue their battle. Meanwhile, Jon and Lois talk with Jor-el. The fate of every kryptonian is at stake.

Batman Prelude to the Wedding: Harley Quinn vs. The Joker #1
Harley Quinn is here to stop the Joker from ruining the Wedding. Why is the Joker angry? Does Harleu still love the Joker? This story leads into Best Man!

Thanks as always for joining in!! Please read WHAT you want to read. You don’t have to read what you don’t. This is just my currated selection trying to choose the most relevent and easiest to get into stories. 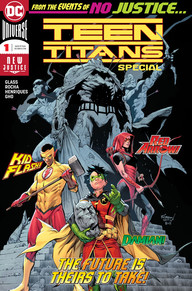 Thanks Nathan. I’ll continue The Man of Steel, Flash and also sample Detective this week!

Teen Titans Special was great! Wallace’s story was my favorite but I did enjoy all 3.

Teenagers are angsty and sassy. I remember being one myself so the direction for these characters make the most sense to me.

That’s really interesting @Nickweiser. As a teenager, I find the actions don’t make sense. Especially comparing Super Sons Damian to this Damian. I think Wally is the only one which I kinda get.

Detective 983. This comic seemed to read really fast for some reason. An intriguing set up for having a new group for Batman. It seems a bit too similar to the whole thing is going on in the Flash, who’s the villain only trying to be helpful.

RIP. Should be coming soon though!

When I was a younger teen, I wrote a story about a group of scientists drilling a hole to the center of the Earth to use the liquid core for energy etc: Once they drained it, they found the innermost suspended core covered with dead bodies that looked like classic denizens of Hell…

Definitely an exciting comic… I can’t imagine what number 50 is going to be like!

I don’t begin to understand what the strength or the sage forces are yet, they haven’t really explained it yet. I haven’t really been following the Flash since about New 52 number 30 or so, but of course I can see the covers as I’m going to comic book stores and I was aware of some other forces besides the speed force were being explored.

Well the writer here certainly feels that Wally is faster than Barry, which makes sense considering Wally is much younger than Barry…who should be dead (Crisis on Infinite Earths) or very old.

I think Zoom’s explanation of the flash legacy being that only inspires others to be the heroes that they never are had some truth to it, but again this guy’s babbling mad and he’s forgoing the fact that the Flashes over and over are great heroes, just like firefighters are.

The treachery of Hunter Zolomon is very similar to how the plot went on this season of The Flash on CW by the way.

@Nathan Maybe it was the loud rebellious teen in me that I see in Emoji, Wallace and Damian. I loved Super Sons as well! I personally feel this is just the next step in Damian’s story especially since he is short of a boy scout!