So let’s talk about Flash: Reckoning of the Forces 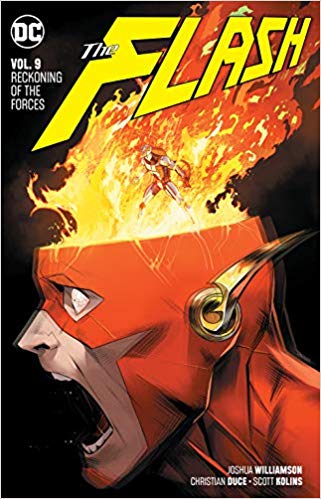 a third of the way through. Poor Trickster…

That was before i finished the selection.

Is this your first time reading Flash: Reckoning of the Forces?

I liked the souped up Trickster vs souped up Flash. That was pretty cool and the art was really good in that arch. The old villian returns reveal at the end of that was nice, too.

How do you feel about Barry and Cold’s relationship

I’m glad they got it together in the end, but I think Barry’s attitude toward Cold was unfair. He did just recently yank Cold from all life as he knew it; I’d be rude and crotchety, toi, if I was Cold.

Which arc in the overall volume is the best

I liked the Trickster issues better; a lot of that was the art.

Which force is more interesting

That being said, sage is more interesting, mainly because I still don’t exactly get what it is. An herb force?

I liked how the strength force has a gravity component to it.

@Nathan.Payson I read all but the last issue of this with you this summer during the other iteration of this club in Community 1.0. I’ll be happy to join in here and to finish that last issue. I’ll also join in when you come back to the Flash for sure.

Force quest definitely intrigues me. The plus Iris might be interesting as it plays out; sort of on the fence about it. if she delves into her other set of memories then i am in.

Fun read! These new forces are outrageous and way over the top with their power’s display, that’s for sure! A very wild trippy and almost dreamlike vision from the writer.