Just saw this on the main DC site, it looks really nice! 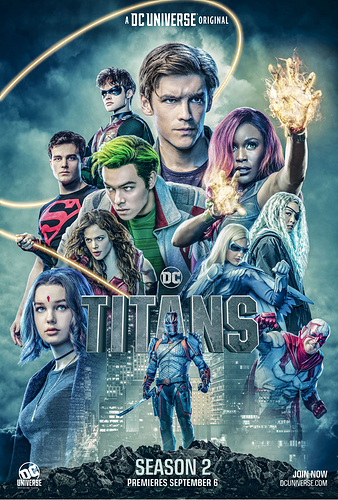 who is that playing ravager?

I’d love to get this poster as part of a contest or whatever.

I don’t have much room (or use) for posters, but I’d make an exception for this one.

If they get ravager incorrectly like how they screwed up Dove I am going to be so angry.
Rose Wilson is my absolute favorite Titans hero.

I’m so excited for this! More than any other show or Movie!

Saw it and it looks awesome can’t wait.

Is it just me or does Dove’s wig look worse…which sucks since she had the only wig I liked in season 1. The wigs in this show are so distracting

Love the poster. Still seems like a LOT of characters, I am guessing either the season will be longer (as in closer to Doom Patrol’s length) and/or will be more episodic. Between this cast and all the villains and other characters announced to appear that is a lot, and that is not even taking in they will have to spend at least 1 episode wrapping up the Trigon story.

We better get Nightwing