Philip K. Johnson is taking over the Superman books in March, starting with a two parter with Phil Hester across both Action and Superman. From there, it’ll be Scott Godlewski on Superman and Daniel Sampere on Action.

Not very encouraged based on the description of the first arc (I have zero interest in Jon taking over as Superman), and I’m not sure we need another writer fawning over the Reeve films (no disrespect, but I think that gets a little out of hand sometimes and can alienate readers who had other entry points to the character). We shall see.

This cover by Julian Totino Tedesco is a beauty, though! 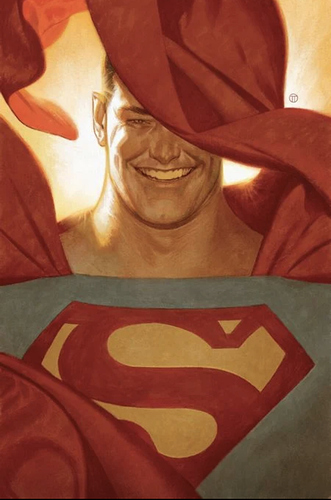 “It’s no exaggeration to say it will change Superman’s status quo forever and have a lasting impact across the entire DC Universe,” Johnson continues.
And that’s where they lost me. Every artist and writer should be free to leave their mark but when was the last time a new team didn’t change the heroes, villains, and city “forever”.

(This is purposely exaggerated not angry troll)

JFC JUST TELL REGULAR STORIES. Whatever happened to calm, poignant, one issue stories with a beginning middle and end?

I like what I’m hearing. I’m retiring from being cynical in advance.

I’ve been trying to be less cynical and critical about things in general the last few years. I’m excited about all the Superman news today. It looks like I might have picked a good time to get more into Superman.

@SWhite: Well said! I am not familiar with Philip K. Johnson’s work, but why does every new creative team come on to a book swinging from the dugout? Your wish for…" calm, poignant, one issue stories…" would now constitute a status quo change. This would be a welcome change not only for Superman but the entire industry.
But let’s be fair and give the new team a sporting chance. If we are not going to judge a book by its cover, I guess we can not judge it by its press release? I don’t know, maybe this medium has passed me by.

You’re right but I am bored at home anticipating a snow day so while I wait all book covers will be judged!

The best post-Future State Superman announcement so far has been Superman: Red and Blue, but I’m excited for the new talent on the core titles.

I actually think it looks too generic. I prefer covers that show action.

Admittedly part of this is skimming through a series trying to find a particular story. When it shows a key scene they are easier to find.