For the Batman fans out there. Looks like Mattel will be releasing a 4 pack of Batman figures, in different color schemes and a Hot Wheels 1989 Batmobile. Both will be a pass for me, but I’m sure some of you will be interested. Looks like they will be available for pre-order online. Link to the news below. 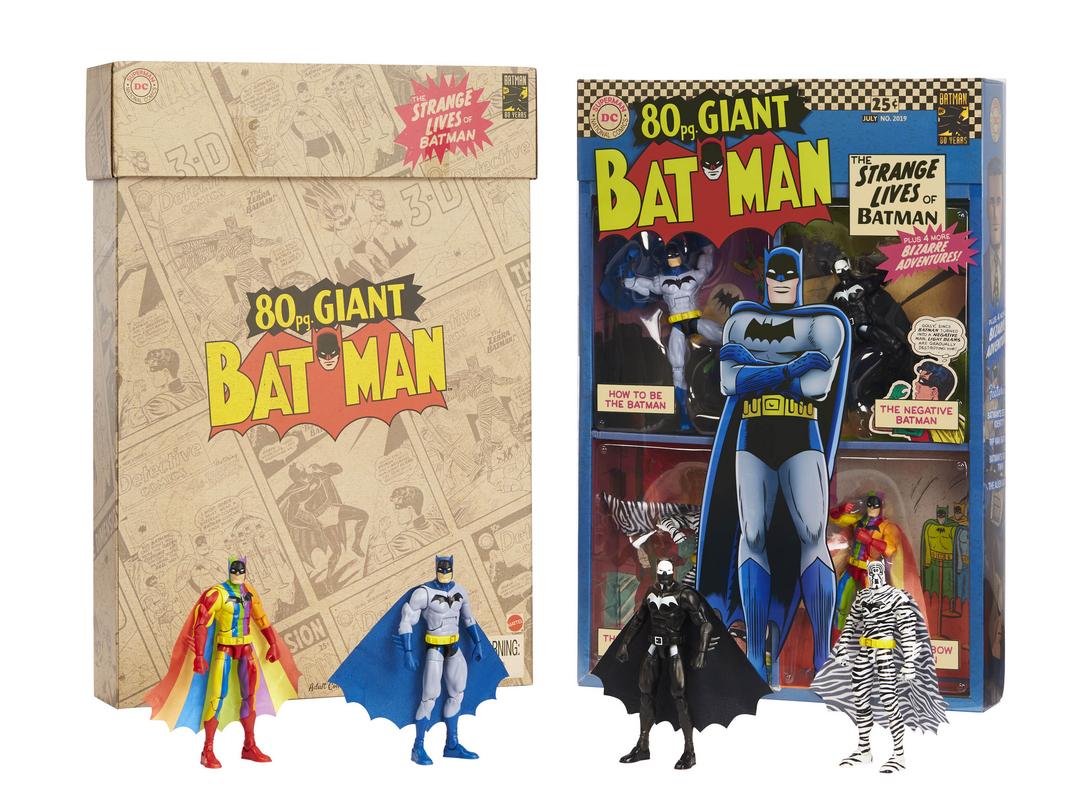 Waaaaa I love the zebra and rainbow batmans.

I’ll pass on both. Neat stuff, but passable.

For a collector’s Hot Wheels item, it’d be nice if Mattel had used one of their more accurate Burtonmobiles instead of the basic $1 variety version that’s been repackaged and repainted many times over.

I read that Batmobile set costs $40. For that price, a 100% accurate Burton ride is to be expected. The packaging and the Batman figure holding his handset are nifty though.

Thanks for this sir

Does anyone else feel odd about the point of articulation in the abs? It seems like it “interrupts” the sculpture.

@AJ I don’t. It’s standard fare for most of Mattel’s 6" DC figures as well as 6" offerings from Hasbro and the like.

I think a better action figure exclusive from Mattel would have been a 6" Michael Keaton Batman. Perfect 80th anniversary tie-in and a perfect 30th aniversary tie-in to Burton’s Batman.

Mattel made an incredible Keaton Batman in the 4" Multiverse line. Just upscale that, add in a few more points of articulation and accessories and bingo, bango, bongo that would be a swell con exclusive.

Yeah, I think it’s a general Mattel “feature” I’ve never been wild about. But I can definitely see a good old fashioned utility belt helping with that

@Applejack, it does interrupt the sculpture but it’s been done on so many figures, it doesn’t feel much different to my eyes than elbow or knee joints. One of the reasons I like Mezco figures is that the cloth goods costumes hide all that stuff. Much higher price point though.

@moro, Mezco is great. About these figures, I will say I really like the packaging.

Agreed, keeper packaging for sure.

@moro I’ve never been able to get into the One:12 Collective figures. Primarily because they cover characters done by many other companies at much cheaper prices.

The day the Mez does Ambush Bug, Mister Miracle or Lobo, I might buy those.

@Vroom, yeah, if you cast a wide net with what you collect (i.e. many characters), the price point is impractical. In any case, with the rate at which they crank out DC figures, I predict they won’t be getting to the characters you mentioned any time soon. Your pocket book is safe, my friend!

@moro I could see them doing Mister Miracle and Lobo, especially a Darkseid War MM to go with their Darkseid. Come to think of it, Im realky in the mood for a Mezco Spider-Jerusalem now.

One:12 Collective Wildstorm figures would be the boat in my water too.

These are great. Any Supermans by chance???

Neca on the other hand…

I like em.
Rainbow and zebra ones cracked me up!

I am considering it, just for the reg Batman & the rainbow one. Cause that whole storyline in the comic book & the live action was classic!

Here’s some additional information and photography for the Multiverse Batman set:

The figures look better than I expected in the additional pics. Says something about checking in at SDCC to get 'em shipped to you, so not available to the masses. Would have went for the classic Bats if he was available on his own. Oh well

I do think that is a set best kept in package!