This week’s allotment of new books is fairly small due to today being a “Fifth Week Wednesday” (the fifth Wednesday of months that have them is generally short on the quantity of new comics released; this is true of most publishers, not just DC)

However, there are new books, so here’s a handy checklist of this week’s new DC related single issues, courtesy of readdc.com:

That’s it! A small but sure crop of new reads.

What are you looking to pick up from DC and beyond this week? 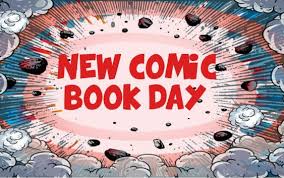 Sad that only 2 DC books are ‘enjoy’ and only one regular DC.
But that the current situation.

Please Geoft Johns, end Doomsday Clock quickly. it seems the writers are treading water recently, waiting for the newest reboot. Until then Nighthawk has amnesia and Titans has no new issues. The October submission say that that Jessica Cruz will lead a new team.

Maybe Victor and Kory are going to be in a new titans, reuniting the original five or six, with Wonder Girl… it’s already late, with Season 2 starting in September.

@Turok Ardent Geoff Johns fan that I am, I agree that we need to see Doomsday Clock wrapped up and soon.

I’m all for “better its late and great” than “on time and not worth my dime”, but that mentality only extends so far. #11 looks to be out within the next month or so, which is nice. Hopefully the book wraps up by Christmas.

The only new book I’m snagging this week is Justice League Dark Annual #1. It’s been years and years since I bought just one new book on a New Comic Day.

@Batwing52 I’ll bet a Monopoly dollar on that. I sincerely hope it’s long before January, but I wouldn’t be surprised either, to be honest.

Only getting Heathen this week.

American Carnage finale!!! One of the best series of the year. Looking forward to this last issue.

Other than that, from DC I’m getting the Bats Secret Files, and from over at Boom the latest issue of Angel.

The Green Lantern Annual #1 (or order from Westfield Comics)

Just picked up two weeks worth, so this includes last week as well. Stack is:
Invisible Kingdom #5
Usgai Yojimbo #2
Reaver #1 (you gotta try random #1’s from time to time, and I recognized Isaacs from her Buffy work)
Paper Girls #30 (The final issue, soon to be classic series, just optioned for a series, Amazon I believe but could be mistaken, anyways, kudos to Chiang and Vaughn, stellar work)
Batman: Last Knight on Earth #2
Green Lantern Annual #1
Ascender #4
Good little reading stack for me!

From the list, snagged me LKoE, Batman Who Laughs, & JLDARK annual.